The Wunderino-Arena , originally and in parlance often Ostseehalle , in the Schleswig-Holstein state capital Kiel is one of the largest multi-purpose halls in Germany . Due to a contract with the owners, the online casino Wunderino has been the name sponsor of the hall since July 1, 2020 . It is located in Kiel-Vorstadt between the parade ground and Europaplatz, close to the center and within sight of the Kiel town hall. 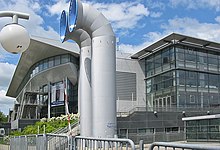 View from the southeast

The construction of the Ostseehalle was decided in 1950 by the Kiel Council and the architect Wilhelm Neveling was commissioned with its construction. In Kiel, which was badly damaged by the war, the area near the center of the formerly small-scale Kuhbergviertel was chosen as the location. For the construction of the hall, parts of the disused aircraft hangars of the air base on the island of Sylt were re-used, with which the construction could take place within a short time: After construction began in December 1950, the hall was inaugurated on June 17, 1951 for Kieler Woche and completed in 1952.

Over the decades, the hall has been renovated and expanded several times. The extensive renovation in 2000 was created by the architectural office Schnittger. Since September 2001, the hall has been in a condition that, in the opinion of the operator, Ostseehalle Kiel Betriebsgesellschaft mbH & Co. KG, makes the Ostseehalle appear “ready for the next 50 years”.

View from the southwest

Today, the Wunderino-Arena is primarily the venue for concerts and handball games of the THW Kiel . It is the second largest regularly used venue of the DKB Handball Bundesliga.

The hall is also the location of congresses, sales fairs, riding and boxing events and major political rallies. In the 1950s and 1960s, the German indoor athletics championships were held several times in the Ostseehalle.

Handball Bundesliga venues in the 2020/21 season