All- wheel steering in motor sport : Fiat Stilo with all-wheel drive in an ice race of the Trophée Andros 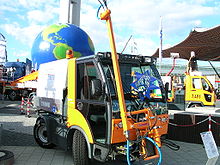 All- wheel steering with a 3.10 m turning radius on a Multicar Tremo Carrier 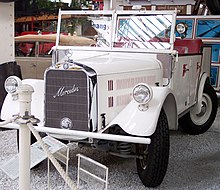 Only special vehicles that have to maneuver in a confined space are normally equipped with all-wheel steering. Examples are four-way forklifts that can move sideways instead of taking a curve and sweepers that can turn in the smallest of spaces.

The all-wheel steering increases the ability of special vehicles, such as extra-long heavy- duty transporters , to maneuver even in difficult spatial conditions.

In car -wheel steering is used, depending on the driving speed display the following functions:

The transition between the area of ​​agilization and stabilization depends on the tuning of the vehicle; it is in the range from approx. 50 to 100 km / h. When steering in the opposite direction, an increase in the yaw angular velocity is achieved, whereas when steering in the same direction this is reduced and the transverse acceleration builds up more quickly. Furthermore, the float angle is also reduced here, which also benefits driving stability.

Active rear-axle steering in cars use various technical implementations. A steering system similar to that on the front axle can be used ( rack and pinion steering, etc.), which adjusts both rear wheels via tie rods . In another implementation, the passive toe links on the rear axle are replaced by active actuators, so that both rear wheels each have their own drive. Furthermore, special steering linkages are used, which in turn are adjusted via a single drive. The systems used today are all steer-by-wire systems, i. H. it is controlled by an electric motor and there are no mechanical or hydraulic couplings to the front axle steering. This places special requirements on functional safety , in particular in accordance with ISO 26262 .

Various integration scenarios are conceivable for the actual steering function, i.e. the calculation of the rear axle steering angle from the vehicle parameters. All active systems known today have their own electronic control unit (also called “ECU” according to the English word) to control the system (adjustment function, diagnoses, etc.). The steering function can be placed on this control unit. Alternatively, the function is integrated elsewhere, e.g. B. in the control unit of the front axle steering or the vehicle dynamics control .

In 1903 the Cotta Automobile Company from the USA produced steam cars with all-wheel drive and all-wheel steering.

In 1907 the Daimler-Motoren-Gesellschaft developed the Dernburg car with four driven and steered wheels. The Società Automobili Brevetti Angelino designed a prototype with all-wheel drive and all-wheel steering in 1927 , but it did not go into series production. In the 1930s, the Mercedes-Benz 170 VL and G5 off - road vehicles had all-wheel steering, as did two types of standard Wehrmacht cars up to 1940 .

The first mass-produced road car with all-wheel steering was the third generation Honda Prelude , which appeared in 1987. The steering worked mechanically with a planetary drive: with a small steering angle, the rear wheels were turned in the same direction as the front wheels, with large ones in opposite directions. Other cars with all-wheel steering include the Mitsubishi Sigma and Mitsubishi 3000 GT, as well as the Nissan 300ZX and the Nissan Skyline . The Mazda 626 in its third generation, the GD series, and other mostly Japanese cars were and are available with all-wheel steering on request. At BMW , between 1992 and 1996, the so-called active rear axle kinematics (AHK) was partly built in as standard (in the 850 CSi) or at an additional cost in the 8 series ( BMW E31 ) .