Whitewater course on the ice canal

The ice canal is part of the historic Augsburg canal network and originally served as a bypass canal for drift ice so that it would not damage the turbines of the waterworks at the high outlet in winter .

Construction on the old Augsburg ice canal began on July 20, 1970. The canal was converted into a whitewater facility in a construction period of 10 months . The landscape integration of the route was in the hands of the Munich landscape architects Gottfried and Anton Hansjakob. On August 22, 1971, the first international competition was held. It served as a test run for the upcoming Olympic Games. The ice channel was the world's first artificial canoe slalom stadium. The ice channel Olympic course has been a model for the design of new slalom courses for decades.

The canal is fed by Lech water, which is branched off above the high drain . Due to barriers, the ice channel offers good training opportunities at every water level. The use of the route depends on the water level of the Lech and thus on the water supply from the Forggensee . In contrast to the Markkleeberg Canoe Park , the route does not require electrically operated pumps and therefore has low operating costs . The rounded fittings and the level floor mean that the risk of injury to the athletes is low. 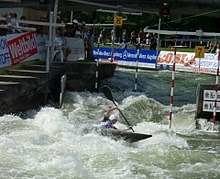 The route forks into a youth channel and the actual ice channel with the Olympic route. Various race tracks with different start and finish points are marked on these two channels. There is also a baby track.

At the finish, the wooded youth route continues towards the city center and is called the capital stream from there. The capital stream carries 35 m³ / s of water, of which 17 m³ / s is accounted for by the Neubach, which is branched off from the capital stream on a short stretch through the old waterworks to the railway line. The capital stream branches off again near the Schwabencenter , where it is also used for water sports, on Friedberger Strasse and supplies the power plants of Augsburg's industry with water.

In addition to numerous national decisions, the sports competitions held here include:

In addition, the ice canal is a regular stop in the World Cup cycle of the International Canoe Association .

Since canoe slalom was an Olympic discipline for the first time in 1972, it was possible for the first time in advance to secure the financing for the construction of an artificial route for this sport. With the design, which was new at the time, the Federal Republic also promised itself a home advantage for its athletes, who, unlike their opponents, could use the route intensively for training purposes. In order to break this, the GDR built a route in Cainsdorf with similar features for the preparation of their athletes. In fact, the GDR canoeists finally won all four competitions. Location of the GDR Canal near Cainsdorf: 50 ° 40 ′ 52.9 ″  N , 12 ° 30 ′ 7.6 ″  E50.681351 12.502098

Competition venues for the 1972 Summer Olympics