The Wittenau station (Wilhelmsruher Damm) is a station on the Berlin Northern Railway in the Wittenau district of Berlin . The station, opened in 1877 under the name Dalldorf , has changed its name several times in the course of history. In operational terms, it is now just a stop and is served by the S1 and S26 lines of the Berlin S-Bahn .

The station of the U-Bahn Berlin , located at the south exit of the S-Bahn station , is served by the U8 line. It lies below the Wilhelmsruher Damm, which also gave the station name its addition.

The original entrance building of the station on Oranienburger Straße with its reception hall and the historical part of the platform are under monument protection.

The train station is in the northern part of the Wittenau district in the Reinickendorf district in the north of Berlin, southwest of the Märkisches Viertel . The original access was in the north-west of the station from Bahnhofsplatz on Oranienburger Straße. In 1984 the platform was extended to the southeast to Wilhelmsruher Damm and an entrance was established there as well.

When the station opened, the station was only called Dalldorf , after the name of the place Wittenau at the time. After the Kremmener Bahn was opened in 1893 , at which Dalldorf also received a stop (today the Berlin Karl-Bonhoeffer-Nervenklinik train station ), it was called Dalldorf (northern line) to distinguish it from the local station there . As a result of the renaming of the place, the train stations were also renamed. The station was called Wittenau (Nordbahn) since 1906 and Wittenau (Nordb) since 1911 . Since September 1994 it has been given its current name in adaptation to the name of the subway station.

In the operating department listing the station bears the initials BWIN .

Restoration of the second S-Bahn track, 1986 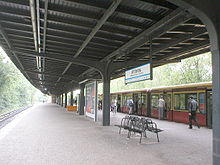 The station was opened under the name Dalldorf (until 1905) together with the railway line on July 10, 1877. At that time, the line was still largely single-track; a second long-distance track was not added until 1891. A second pair of tracks was added in 1912 to separate long-distance from suburban traffic. The suburban tracks were finally electrified in 1925 as the second line in the Berlin area with power rails , and the S-Bahn was introduced.

After the Second World War , the line, including the station, was reduced by one track. An escape route for crossing trains was not preserved, one was only set up one station further at Waidmannslust station. Due to the S-Bahn boycott as a result of the construction of the Wall, many potential passengers avoided the S-Bahn and switched to the BVG's means of transport, the operational Reichsbahn maintained the line and its facilities, but no major investments were made.

When the Senate took over the operating rights of the S-Bahn in West Berlin on January 9, 1984, the line was shut down immediately, if only for the time being. After protests by the passenger associations, the route between Gesundbrunnen and Frohnau was used again on October 1, 1984 . In order to increase the capacity of the northern section, this was also expanded to double-track by 1986, with which Wittenau got its second main track back. The section north of Waidmannslust was temporarily closed again in 1985. During this time, the platform, which was extended to the south, was also given an exit to Wilhelmsruher Damm, in order to enable transfer traffic to the buses in the direction of Märkisches Viertel and also to the then planned underground. Around the same time, the discussion about the future name of the station sparked. The main reason for this was the extension of the U8 underground line, which was to have a train station in Wittenau. Since the plans came from the time before the takeover of the S-Bahn, the BVG chose the name Wilhelmsruher Damm for its underground station to deliberately differentiate it. After 1984 this name was also intended for the S-Bahn station, but was not adopted. Only the addition Wilhelmsruher Damm has adorned the station signs since then.

A connection to the subway had been planned since the construction of the Märkisches Viertel in the 1960s . In the mid-1980s, it was decided to extend the U8 line . This should now swing to Wittenau and cross the Märkisches Viertel from the west. But it was not until September 24, 1994 that today's Wittenau terminus of the U8 was opened at the Wittenau S-Bahn station and opened for business on September 29.

The underground station was designed by the architect Rainer G. Rümmler . In the style of the other subway stations built in Berlin in the 1980s, it received colorful tiles , here mainly in the colors green and yellow. The patterns on the pillars are reminiscent of trees that support the ceiling. The station is located under Wilhelmsruher Damm and has a transition to the S-Bahn.

An extension of the U8 towards the east into the Märkisches Viertel is planned, but due to the tight budget situation in the state of Berlin, this is unlikely for the time being.

In the medium-term planning of the Berlin Senate (until 2025), the station is to be expanded to include a regional train station. The German track is currently considering the necessary reconstruction of the mainline tracks of the Berlin Northern Railway between Gesundbrunnen and Birkenwerder .

The station is served by lines S1 and S26 of the S-Bahn and line U8 of the underground. Most of the bus routes that can be changed over offer a connection to the Märkisches Viertel.