The Corps Friso-Cheruskia in Karlsruhe was created on October 7, 1950 from a merger of three associations and is a member of the Weinheim Senior Citizens' Convention (WSC). The oldest of these, the Landsmannschaft Teutonia , was founded on December 14, 1860 at the Eidgenössisches Polytechnikum in Zurich by six members of the Landsmannschaft Slesvico-Holsatia and Frisia Hannover. After disputes between the polytechnicians and the rectorate of the ETH and the move to Rapperswil (1865), she moved the seat to Karlsruhe. Because of the older naming rights of the fraternity of the same name Teutonia, it renamed itself Frisia . The colors of Frisia Karlsruhe were light blue-white-black (fox colors: blue-black) with a blue cap. The motto was Fides, libertas, unitas . Frisia had a temporary relationship with the Karlsruhe Seniors' Convention, which was renewed after a temporary break in the summer semester of 1880. The common mensur operation led to a rapprochement with the Karlsruhe Corps and finally on December 6, 1886, the acceptance as a renouncing, on May 26, 1887 as a full corps in the Karlsruhe and thus in the Weinheim Senior Citizens' Convent. In the summer semester of 1905, members of the Frisia in Danzig reconstituted the suspended Baltica Karlsruhe compatriot as a corps in Weinheimer SC.

The second connection, Cheruskia Karlsruhe, emerged from a school group of the same name founded on January 2, 1870. Six of its members constituted the black society Cheruskia in the winter semester of 1874/75 , which was recognized as an academic association on October 5, 1874. Cheruskia advocated the principle of unconditional satisfaction, but did not initially contest any determination. In 1889 she acquired her own weapons and subsequently fought mainly against the later Suevia country team and the Hubertia forest association . A short-lived crap relationship with the Karlsruhe Deputy Convent broke up due to disputes over the crap comment. In 1891 Cheruskia became a member of the Fulda Representative Convent, after its dissolution in the Mündener Representative Convent, after the First World War finally in the Rothenburg Association of Black Connections (RVSV). On July 28, 1925, she was accepted into the senior citizens' convention in Karlsruhe (and thus in the Weinheimer) and on May 17, 1926 as a full member. Their colors were blue-white-green (fox colors: white-green) with a green hat. The motto was Amico pectus, hosti frontem! .

Joining the Weinheimer SC was promoted through the establishment of Cheruscia Danzig , the third merger. It was founded on July 17, 1925 on the initiative of some old men of Cheruskia Karlsruhe by three WSC members (Radulf Schmidt, Ostfalia Hannover; Georg Mössmer, Normannia Munich; Wolfgang Heckmann, Germania Munich) as a WSC corps and took over the members of the im In the winter of 1924/25 the black connection Rothenburg Danzig, which in turn had maintained close ties with the Karlsruhe Cheruskia.

These three connections merged on October 7, 1950 in Weinheim to form the Corps Friso-Cheruskia with the colors light blue-white-dark blue. In 1993/94 Friso-Cheruskia provided the first local spokesman for the WSC with the Turkish-born Aydin Karaduman and thus, according to the Corps, the first chairman of a German corporation with foreign citizenship.

At the end of the 90s, Stefan Eberlein and Manuel Fenn shot a documentary about the time of the foxes and accompanied the Corps' activities for one semester. The film was released in 1999 under the title No close season for foxes .

Every spring, the Corps and the University of Karlsruhe award the Hermann Billing Prize for outstanding diploma or doctoral theses. The prize is named after the Karlsruhe Corps student Hermann Billing , who was active at Cheruskia and later taught as a professor at the Fridericiana and at the Karlsruhe Art Academy . 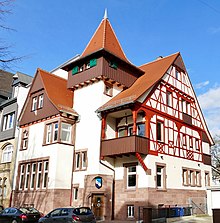 Frisenhaus GmbH is Baden's oldest limited liability company (Germany) . The purpose of the foundation is the operation and maintenance of the corp house in Karlsruhe's Parkstrasse. With its establishment, the Corps Frisia was able to successfully protect itself from expropriation during the Nazi era. The Frisenhaus is now a listed building .

Holder of the Klinggräff Medal