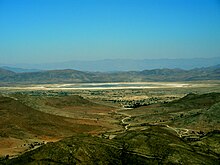 Chuquisaca is a department in the southern part of the South American Andean state of Bolivia .

The Departamento Chuquisaca stretches from the Andes chain of the Cordillera Central in the northwestern part over the north-south running upstream Voranden chains to the lowland region of the Gran Chaco in the east and has an area of ​​51,524 km².

The mountain regions in the west in detail are:

The climate in the high valleys in the west and in the middle is temperate, in the eastern lowlands it is tropical hot. Rivers north of the capital Sucre, such as B. the Río Grande flow into the Amazon basin . Southern rivers such as the Río Pilcomayo flow into the Paraná Basin . A watershed line therefore runs through the department .

The population of the Department of Chuquisaca has more than doubled over the past sixty years, with the dynamism of population growth weakening significantly in the past decade:

The Chuquisaca department is divided into 10 provinces:

Almost half of the population of the Chuquisaca department lives in Sucre , the capital of the department that is also the formal capital of Bolivia.

Besides the provincial capitals, there are only three other cities with more than 2,000 inhabitants: Presto , Culpina and Candua .

Overall result in the Chuquisaca department in the regional elections on April 4, 2010:

Division of Bolivia into departments