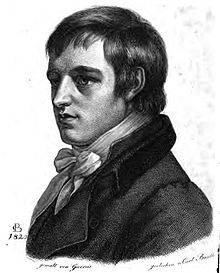 Heinrich Voss. Engraving by Carl Barth after a painting by Franz Gareis (1800)

Heinrich Voss (full name Johann Heinrich Voss , born October 29, 1779 in Otterndorf , † October 20, 1822 in Heidelberg ) was a German classical philologist and translator. From 1804 to 1806 he was a professor at the Weimar grammar school and from 1806 until his death professor of Greek and Latin literature at the University of Heidelberg .

Heinrich Voss was the second son of the writer and translator Johann Heinrich Voss (1751–1826) and his wife Ernestine nee. Boie (1756-1834). His older brother Fritz died of marching fever ( malaria ) at the age of five . Heinrich also fell ill, survived but relapsed frequently and remained in poor health all his life. He grew up with three younger brothers in Eutin , where his father was the principal of the Latin school from 1782 to 1802. His brother Wilhelm (1781–1840) later became a doctor in Eutin, his brother Hans (1783–1849) an architect and building inspector in Baden, his brother Abraham (1785–1847), like his father, a school principal and translator.

Heinrich Voss showed literary and artistic talent early on. He attended the Rector's School in Eutin from May 1787 to April 1799 and accompanied his father on trips, for example to Braunschweig , Halberstadt , Weimar and Halle in the spring of 1794 . On this trip he met Johann Wilhelm Ludwig Gleim , Johann Wolfgang von Goethe , Johann Gottfried Herder , Christoph Martin Wieland and Friedrich August Wolf . Many writers and scholars also frequented the house of the Voss family in Eutin. Friedrich Heinrich Jacobi and Fritz Stolberg were among their neighbors .

In the summer semester of 1799 Heinrich Voss went to the University of Halle and studied theology and philology (with Friedrich August Wolf). He renewed his contact with Goethe during a visit at Christmas 1800. In the winter semester 1801/02, Voss switched to the University of Jena and devoted himself entirely to studying philology. After graduating, he had to refuse a private teaching position in Berlin for health reasons; his father's attempt to make him his successor at the rectorate school in Eutin also failed. In 1804, on Goethe's recommendation, Voss finally received a professorship at the Weimar grammar school , which had been headed by Karl August Böttiger since 1791 . Voss taught Latin and Greek in the lower classes at this school and, according to the testimony of his brother Abraham, was very popular. He also worked with Goethe and checked the metrics of his verse epic Hermann and Dorothea , for example . He was also in friendly contact with Friedrich Schiller in Jena. He turned down a call to the University of Würzburg (1804). As early as 1805 he fell ill again and had to take a leave of absence for nine months.

After a long cure in Jena, Heinrich Voss visited his parents in Heidelberg in August 1806 , who had moved there a year earlier. There he also met Friedrich Creuzer , who had been professor of philology and ancient history at the University of Heidelberg for two years . Creuzer promised him a professorship at the university and promoted it to the university's curator. Heinrich Voss first returned to Weimar. After the battle of Jena and Auerstedt in October 1806, the Weimar high school was closed, so that Voss had no more income and accepted Creuzer's offer. He moved to Heidelberg in November 1806 and was appointed associate professor of Greek at the university there.

Voss spent his entire subsequent career in Heidelberg. His starting salary of 300 guilders was gradually increased to 1000 guilders. In 1809 Voss was appointed (personal) full professor of Greek and Latin literature. His brother Abraham attributes him considerable teaching success, while the literary scholar Franz Muncker later summed up: “As a docent he did not develop much activity; nor did he have any significant literary successes. ”In addition to his work at the university, Voss also remained active as a writer. As before in Weimar, he wrote literary reviews and published two exegetical treatises on Greek poets. Together with his youngest brother Abraham, he participated in the translation of William Shakespeare's dramas, which his father planned after the publication of Schlegel's translation and which appeared in nine volumes from 1818 to 1829. 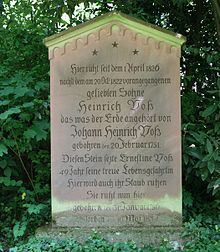 Voss' main work was a translation of the Aeschylus tragedies, which he had been working on since 1804, but which made slow progress. On October 20, 1822, he died of dropsy . His unfinished translation of Aeschylus was completed by his father and appeared in 1826. Heinrich's youngest brother Abraham published a selection from his correspondence with important contemporaries in three volumes from 1833-1838, which are an important source of Heinrich Voss' life.

See also : List of Classical Philologists at the Ruprecht-Karls-Universität Heidelberg