The extensive silver find was discovered on October 17, 1868 on the western slope of the Galgenberg in the southeast of Hildesheim near the construction of a military shooting range . During the excavation work on this firing range for the Hanoverian infantry regiment Voigts-Rhetz , the gunner August Armbrecht came across ornate metal parts. The rescue was carried out by soldiers involved in the construction work. Most of the treasure was transported by cart to the barracks for cleaning. A large part of the find was processed in the Hildesheim silversmith Th. Blume . At the place of discovery, Hildesheim citizens took found parts into custody, some of which were later returned, but some also remained in Hildesheim households. It can therefore be assumed that the find has not been fully preserved. In the case of other objects - such as an antique spoon  - on the other hand, it is disputed whether they can be assigned to the treasure trove.

Senator Hermann Roemer , one of the founders of the Roemer and Pelizaeus Museum in Hildesheim, visited the site when he learned of it. The next day, the Hildesheimer Allgemeine Zeitung reported on a valuable find, which presumably came from the holdings of a princely household and could be assigned to the Renaissance . The excavation at the shooting range was searched again and several pieces of silverware were collected.

Professors Pernice and Winter who had come from Göttingen finally recognized the Roman inscriptions and stylistic features . A few days after the find, Colonel August von Cohausen , who had researched Roman military camps in the Rhine area, asked the soldiers involved in the discovery about the location of the find. He was also commissioned to carry out more detailed investigations at the site, which he carried out in 1869. 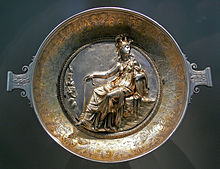 Replica of the laurel bowl from the Hildesheim silver find by the silversmith Th. Blume

The place of discovery was evidently a pit in which the found objects were set up in a relatively orderly form as a triangle. Three large vessels - a bucket , a krater, and a kantharos  - apparently contained a number of smaller vessels, next to them were two silver tankards , a hinged tripod , a candelabra, and a large rectangular bowl . From the point of view of local researchers, important pieces of the Hildesheim silver treasure are a simple trowel and the so-called Athena bowl, the engravings of which are or were interpreted as the initials of Varus .

All finds are eating and drinking utensils , so that one can speak of tableware as a whole. From the stamped antique numbering and weight information one can conclude that it is half of a tableware. Since exactly half of the stated total inventory was found for a number of components of the dishes, some scientists assume that a deliberate division of a silver ensemble that was once twice as large was made here.

Some of the items found show strong signs of use . Engraved owner names indicate that the tableware components belonged to different previous owners and that the tableware was apparently put together from different sources. Most of it is Augustan silver work, the rest is a bit older.

The interpretation of the find

The find was mainly used by Hildesheim local researchers as evidence to localize the Varus Battle near Hildesheim. However, since only the discovery of the silver treasure can be cited as evidence and further archaeological finds are missing, this can be considered unlikely. Due to the archaeological finds made since 1987, the Kalkriese region near Osnabrück is the most likely site of the battle.

It is also understandable for local researchers that the find is not the table silver of the Varus . The crockery is far too small for that, and Varus would certainly not have used silverware with medals of lower ranks . Furthermore, it is not credible that the wealthy Varus, who is related to the imperial family, used a silver ensemble composed of other tableware. Due to the dating of the found objects, however, it is conceivable that the dishes in question were from the possession of an officer in the Augustan army.

The plunder of the Varus army during the Varus battle or the legionary camp Vetera (near today's Xanten ) during the Batavian uprising was named as a possible place of origin . The orderly collection of the silver find speaks more in favor of sacrifice or careful hiding . Whether this was done by a Roman officer or a Germanic can perhaps never be clarified without further excavations. The apparently meticulous division of the dishes into exactly two halves gives rise to the assumption that the booty was neatly divided between the jealous Germanic generals and victors of the Varus Battle, Arminius and Inguiomer , and placed there as a sacrifice by one of the two. See also literature O. Höfler.

The theses of Hildesheim local researchers

The question of whether further excavations at the site of the Hildesheim silver find are worthwhile is still the subject of local disputes.

Some Hildesheim local researchers still suspect around 70 missing counterparts in the ground and point out that Colonel von Cohausen only carried out subsequent excavations directly at the site and only in an area of ​​15 × 15 m. This happened as early as 1869. From the point of view of local researchers, however, no further explorations have been carried out in the immediate vicinity of the site to this day ; For example, it is also just to the north of the locality situated hillside grave that marked the Vergrabungsort in ancient times, been ignored in their view, to this day. They plead for a further search for the second half of the Hildesheim silver find by means of an emergency excavation , as the pieces found well over 100 years ago had already suffered a lot in the aggressive soil. Other experts point out that following the discovery at that time, extensive excavations and later developments were carried out, so that further archaeological investigations in this area no longer make sense. Those who advocate further archaeological investigations argue, however, that the area was not excavated but leveled and that the immediate area of ​​the site is still undeveloped. They also fear robbery graves and refer to a foundation stone buried there in 1875 with documents from that time, which could be found during such an excavation.