The Hillsborough Stadium (also briefly Hillsborough called) is a football stadium in the English Sheffield . It is the home ground of the Sheffield Wednesday football club . It has hosted the club's games since the first turf was laid in 1899. Today the venue holds 39,812 spectators on its four grandstands, most of which are covered. Hillsborough Stadium is named after the neighborhood that surrounds it. It gained notoriety around the world as the scene of the viewer disaster of 1989 .

In 1989, the stadium was the site of the Hillsborough disaster , when 96 Liverpool FC fans were pressed to death during an FA Cup semi-final match . This disaster led to some changes to the stadium's stands. Little by little, all standing stands were equipped with seats and the fences around the playing field were replaced by low safety barriers so that spectators can move onto the playing field in an emergency. 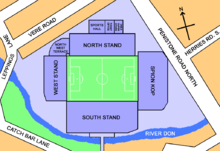 Site plan of the stadium

The grandstand extends across the north side of the lawn and is one of the earliest examples of cantilever construction and one of the first grandstands in England to span the full width of the pitch. The first cantilevered grandstand was built on the field of the Scunthorpe United Club , Old Show Ground. Thanks to this grandstand, Hillsborough Stadium is the only football stadium that is mentioned in the book Buildings Of England by Nikolaus Pevsner .

Located on the the Leppings Lane pointing end of the square this grandstand can accommodate the supporters of visiting teams at home games of Sheffield Wednesday. It was originally built for the Football World Cup in 1966 and before the Hillsborough disaster in 1989 contained a standing stand, which was then converted into a pure seating stand.

Construction on this oldest grandstand in the square began in 1913, based on designs by designer Archibald Leitch , whose salary for the plans was £ 17,000 . Today's grandstand has undergone several improvements. The current example of this is the construction of press booths, two conference rooms, a bar and a restaurant as well as an additional upper tier of seats for the 1996 European Football Championship .

The South Stand is the most recognizable grandstand within the stadium and still contains the old view with a clock from 1913. It houses the main reception area, press and food areas, the family area and seven modern refreshment kiosks.

The Spion Kop was upon a hill, the scene of a battle in the Boer War , was named and built on a natural hill at the east end of the square. At Sheffield Wednesday home games, this is where the team's most vocal supporters are.

The grandstand was the last in the stadium to be converted into a purely seated grandstand, primarily in order to comply with the new guidelines of the Premier League . The last renovation took place in 1993.

The interior of the Hillsborough

Stages of the English EFL Championship in the 2020/21 season