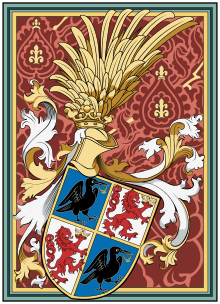 Coat of arms of the Huniads

Hunyadi (in historical sources also Hunyady , Romanian : Huniade or Familia Corvineştilor ), Germanized Hunyads , is the name of a Hungarian noble family . According to the majority of sources, it was of Romanian (Wallachian) origin. Modern historians claim it is also of Cuman origin.

The sex acquired special importance in the late Middle Ages. Matthias (Hunyadi) Corvinus (1443–1490) wrested most of their lands from the Habsburgs and became king of Hungary, Bohemia and Croatia.

Have family members of Both, a descendant of the Thocomerius a Romanian Feudalstaatengebildes south of the Carpathians from 1290 to 1310 and, according to a charter of King, leader Charles of Anjou of 1332, father of the founder of the Principality of Wallachia Basarab I. descended.

The first documented member of the family, son of Both, carried the name Șerban (also Serb or Sorb ; Hungarian : Csorba ) and settled in Hunyad County in Transylvania , coming from Wallachia . His son Voicu (Hungarian: Vajk; English: Voyk or Vojk) was ennobled in 1409 by Sigismund von Luxemburg with the small estate Hunyad in Transylvania. 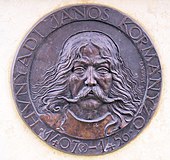 Johann Hunyadi , also János or Iancu , (1407-1456), son of Voicu and Elisabeth Morzsinay (Margina), was a statesman who worked for Hungary. He derived his family name from the property purchased by his father. Hunyadi had the family'sancestral castle built there in place of the old property from 1446, today's Hunedoara Castle , then called Hunyadvár. For King Sigismund he took part in the Hussite Wars in1420and drove the Ottomans out of Smederevo in 1437. For these services he received numerous goods and a seat on the royal council. In 1439 he supported the election of Wladyslaw III. who made him voivod of Transylvania . As the most important voivode on the Hungarian border with the Ottoman Empire, he played a special role in the subsequent clashes with the Turks. As a military leader, he led the troops in the wars against the Turks, unsuccessfully, among others, in the Battle of Varna was 1444, in the King Władysław, and in the second Battle of Kosovo in 1448. 1446 he was the child king Ladislaus the Posthumous to Regent elected , until 1452 he was governor of the Kingdom of Hungary. Pope Nicholas V made him prince in 1448, and King Ladislaus appointed him Count of Beszterce and captain general of the kingdomin 1453. In 1456 he successfully organized the defense of Belgrade against Mehmed II , but then died in the camp of the plague.

Ladislaus (László) Hunyadi (1433–1457) was the eldest son of Johann and Countess Elisabeth Szilágyi de Horogszeg and exposed to a time full of intrigue and power interests that ultimately led to his early death. Already in 1453 he was ban of Croatia-Dalmatia , but had toresign from this office in 1455due to serious accusations by Ulrich II. Count von Cilli (Celje) . The same Cilli accused the family of infidelity after the death of Johann Hunyadis and demanded the transfer of all goods because of allegedly high debts to the state. After a murder plot against Ladislaus by Cillis failed, the latter attempted to kill him in Belgrade, but was killed by the Hunyadi loyalists. King Ladislaus V appointed the Huniaden as treasurer and captain general of the Kingdom of Hungary . After hearrivedin Buda with the king, however, he was arrested, charged with high treason and executed.

Matthias Hunyadi alias Matthias Corvinus (also Hunyadi Mátyás , Matei Corvin , Matija Korvin ) (1443–1490) was the younger son of Johann Hunyadis and Elisabeth Countess Szilágyi de Horogszeg. Emperor Sigismund had given his father a coat of arms with a raven (Latin: corvus ). There are several legends surrounding the adoption of the name Corvin (us). It is most likely that he believed one of his court scholars who had traced the origin of the Hunyadis back to the Roman family of Corvini, but perhaps also to the city of Kovin (Kubin, Keve, Latin Covinum) - "in Corvino vico", like Antonio Bonfini wrote.

Matthias was king of the Kingdom of Hungary from 1458 to 1490 and, in personal union , of the Kingdom of Croatia and from 1469 to 1490 the anti-king of Bohemia . In fact, he ruled the Habsburg hereditary lands from Vienna from 1485 to 1490 , having previously conquered large parts of them.

Johann Corvinus (also János , Jánoš , Ivaniš ) (1473-1504) came from an illegitimate relationship between Matthias Corvinus and the bourgeois daughter Barbara Edelpöck and was his only child. Johann Graf von Hunyadi was Ban of Croatia and Slavonia and, among other things, Duke of Slavonia .

With the death of his only son Christoph (1499–1505), the Hunyadi-Corvinus line became extinct in the male line.

The Counts Hunyady von Kéthely , also Hunyadi de Kéthely , are an old Hungarian noble family, which some genealogists associate with the famous family of the Hunyads. Georg Fejer writes in his work “Genus, incunabula st virtus Iannis Corvini de Huyad, Reni Hungar. Gubernatoris, Arumentis criticis… ”(Buda 1844) that he said“ the most exhaustive and correcting various errors ”. Lehotzky and Benkö also supported this thesis. The fact is that the family of Count Hunyady von Kéthely , which still exists today, also lead the raven with the ring in the heart shield of their coat of arms. This raven, however, was the coat of arms given by King Sigmund to the aforementioned Johann Hunyady, from which the epithet Corvin, which Matthias then led, arose, and whose origin can be traced back to a romantic incident known as "The Raven of the Corvine" .

Genealogical research shows that its origin can be traced back to the end of the 16th and beginning of the 17th century. The progenitor is Andreas Hunyadi, who was ennobled by King Rudolf in 1607 . He acquired Kiskresztyen and Nyitraszegh in Upper Hungary, now Slovakia. His marriage to Barbara Viszocsanyi gave birth to six daughters and two sons. The older son, Ladislaus or László († 1694), Vice-Governor in Bars County , and the younger, Franz († 1690), continued the sex and formed two lines, the older and the younger, counts. At the beginning of the 18th century the family owned properties in Somogy County , later also in Ürmény (today Mojmírovce , Slovakia).

Franz's grandchildren, Georg (1693–1770), Jesuit (1711), professor of rhetoric and poetics at the University of Tyrnau , later rector of various colleges, and Anton were elevated to the baron status by Emperor Franz I Stephan on March 24, 1753 . His son Johann (1772–1827) was granted the Hungarian count status by Emperor Franz II on June 6, 1792, and then, after Megerle von Mühlfeld , the Count Joseph (1773-1822) on March 8, 1797 in Vienna also the imperial count status. He was married to Therese Countess Pálffy . From 1814 to 1821 he organized the first horse races in Central Europe in Ürmény, with up to 40,000 spectators. Count Kálmán Hunyady de Kéthely (1828–1901) was the first president of the Vienna Trotting Club . His sister Julia (1831-1919) had been married to Mihailo Obrenović , Prince of Serbia, since 1853 . In 1945 the family was evicted from their possessions in Hungary. Around 1995 the brothers József (* 1962) and István (Stefan) (* 1968) bought back part of the winery in Kéthely , which József manages on site; they grew up in Italy, where their grandfather Marchese Mario Incisa della Rocchetta produced the Sassicaia wine in Bolgheri / Toscana . Stefan runs a brewery in Bolgheri.

The following other families should be mentioned, although there is hardly any evidence of relationship to the parent sex to be provided:

Personalities by the name of Hunyady

There are several scholars and writers with the name Hunyadi who are not related to the Hunyads, including: