Ikaria ( Greek Ικαρία [ ikaˈria ] or Ικαριά [ ikarˈja ] ( f. Sg. )) Is a Greek island. Since 2011 it has formed the municipality of Ikaria (Δήμος Ικαρίας) and, together with the municipality of Fourni Korseon, the regional district of Ikaria in the North Aegean region . The island has 8354 inhabitants, the administrative seat and main town is Agios Kirykos .

The Ikarus Sea and the island owe their current name to the Icarus legend. In local parlance, the island is also known as Nikaria (contraction of Νησί Ικαρία, 'island of Ikaria').

Ikaria is located in the East Aegean and, together with Samos, represents the northern end of the Southern Sporades . The 255.320 km² island is about 19 km west of Samos and 46 km east of Mykonos. The closest islands are those of the Fourni archipelago.

Ikaria reaches the greatest length of almost 40 km from west-southwest to east-northeast. The width of the island is between 5.5 and 8 km, the narrowest point in the northeast near the airport is 1.5 km. Ikaria has a predominantly mountainous character with numerous gorges, but also a plateau in the southwest. For almost its entire length, the island is traversed by the Atheras , which reaches a height of up to 1,037 m. This mountain range divides Ikaria into a steep, inaccessible southern half, while the slope on the north side is gentler and merges into small, fertile coastal plains at Kambos and Faros. The coastline is hardly divided; it offers some bays, anchorages or natural harbors.

Ikaria has a predominantly typical Mediterranean climate with occasional winter rainfall and a dry period of around five and a half months from late April to early October. The mean annual rainfall is 579.8 mm with a maximum in January and a minimum in August. The average annual temperature is 18.9 ° C. The mean monthly minimum temperature is 9 ° C in February and the mean monthly maximum temperature in July is 29.3 ° C. In summer, winds from north to northeast prevail, while the main wind direction in winter changes to south to southwest.

On Ikaria, Daedalus is said to have buried his son Icarus , who is said to have fallen into the sea while fleeing from Crete . Daedalus and Icarus are their captivity, the labyrinth of the Minotaur , who left with home-made wings. In the port of Agios Kirykos there is a modern bronze sculpture depicting this event.

Dionysus , the god of wine, is said to have had a legendary encounter with pirates near Ikaria. He is also said to have particularly valued the wine of Oinoe (Gr. Οίνος, wine ). The original name of the island was Doliche (translated roughly the long one ) until it was finally named after Icarus.

The history of Ikaria began in the 8th century BC. When the island was settled from Miletus . In the 5th century BC Then the cities of Oinoe and Thermai were members of the Attic League . From around the 2nd century BC BC Ikaria belonged to Samos .

Above Oinoe was the medieval settlement with the partially preserved church of Hagia Irini (11th century). The remains of the fortress Koskinas (Paliokastro, today Kosikia) also belong to the Byzantine period. Ikaria (Nikaria) also served as a place of exile at that time. After 1204 the island became a Franconian barony, after 1304 it came to the Genoese of Chios, in 1481 to the Hospitallers of Rhodes and in 1523 to the Turks.

From 1523 to 1912 the island belonged to the Ottoman Empire . During the Italo-Turkish War of 1912, the Greek inhabitants fought for their independence and formed the Free State of Ikaria , which was annexed to Greece in July 1913. During the Second World War , Ikaria was first under Italian and later under German occupation. As a result of fighting and repression, the island's population suffered very high losses, both in terms of human life and economic goods. In the village of Karavostomos alone , over 100 people are said to have starved to death. The privations of the World War were immediately followed by those of the Greek civil war between nationalists and communists (1946–1948). The new Greek government, formed from the victorious nationalists, used the emaciated island as a place of exile to accommodate up to 13,000 communists in exile camps.

These exiles were taken in by the residents of Ikaria and exerted considerable ideological influence on them. The Communist Party of Greece (KKE), which lost its dominant position on the left in the rest of the country towards the end of the 20th century, provided all three mayors in 2010. That is why the island is also jokingly or provocatively called "Red Island". Since the communists are supposed to gain access to privileges, criticism of "a bizarre form of communism" has also been voiced.

With the implementation of the municipal reform according to the Kapodistrias program in 1997, the island of Ikaria was divided into three municipalities with a total of 12 municipal districts. On January 1, 2011, the Kallikratis program merged the former communities on the island into the newly created community Ikaria ( Dimos Ikarias Δήμος Ικαρίας), the administrative seat is Agios Kirykos. The previous municipalities form municipal districts. 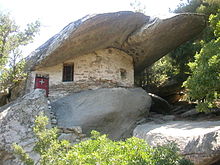 Monastery in the interior of the island

The main town of the island is the port city of Agios Kirykos (Άγιος Κήρυκος) . A little east of it, in the village of Therma (Θέρμα) , the thermal springs, known since ancient times, bubble. The 50 ° C hot water contains sulfur , radium and radon . Nearby are the ruins of the ancient city of Drakanos . Further sources are to the west of Agios Kirykos near Therma Lefkados by the sea. Here the water gushes out of the ground at almost 60 ° C in the immediate vicinity of the shore.

The island's airport is located at the far northeast end of the island, twelve kilometers from Agios Kirykos. It can be reached by plane from Athens , Thessaloniki , Samos and other domestic destinations. It is a national airport that cannot be approached directly from abroad.

The port city of Evdilos (Εύδηλος) on the north coast is the former capital and now the second largest town on the island. From both ports ferry connections go east to Samos ( Karlovasi ) and Fourni, west via Mykonos and Paros or Syros to Piraeus .

The fishing villages of Armenistis (Αρμενιστής) and Gialiskari (Γιαλισκάρι), which are about ten kilometers west of Evdilos, are also of touristic importance . Between the two villages lie the two largest sandy beaches on the island ( Livadi and Mesachti ). These are among the main attractions on the island. The town of Armenistis in particular attracts many visitors and has the largest density of visitor beds on the island.

The foundations of an Artemis temple can be seen in the Nas bay (Greek Ναός = temple) . The picturesque bay, in which a stream, the Chalaris, flows into the sea even in summer, used to be an unofficial campsite. Today the area is under nature protection, which does not detract from its popularity as a seaside resort, especially since a continuously paved road opens up the western north coast of the island.

Christos Raches, on the other hand, the Chora and the most charismatic place on the island, is protected in the mountains. In ancient times he was called Histoi . The mountain village was the place of exile of Mikis Theodorakis in the 1947 civil war (according to other sources he was in Vrakadhes, a few kilometers further west). The village - usually called Raches forshort- is known among locals and travelers because of its shifted times of the day : the shops and taverns open much later than usual (some not until midnight) and accordingly close late, often at three or four at night. This phenomenon is not grown with the development of tourism, it should be taken into account during excursions, because in the afternoon the place is also the season deserted .

Armenistís - the tourist "center" of the island

Since the 1960s, the Greek government has invested heavily in the expansion of the island's infrastructure, so that Ikaria - albeit belatedly - was still able to benefit somewhat from the tourism boom.

Nevertheless, there is still no mass tourism on Ikaria. This was prevented by the lack of an international airport, the lack of major tourist attractions and the infrastructure, which in many places is still not in line with Western European standards. This also explains the popularity of the island among individual travelers, who do not see these restrictions as a disadvantage and therefore appreciate the originality of the landscape and people that can still be found. In addition to tourism, the agricultural sector still generates a large part of the national income.

Municipalities of the North Aegean Region