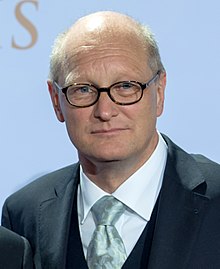 After graduating from high school, Knuth studied political science , communication science and history at the Ludwig Maximilians University in Munich and the University of Texas at Austin . He completed his university studies with a diploma and attended the German School of Journalism at the same time .

He has been working for NDR since 1985. First he worked as a news editor for radio , then as an editor for social policy , and later as a time radio editor for NDR 2 . From 1991 to 1994 Joachim Knuth was assistant to the artistic director Jobst Plog . From 1995 he worked for NDR Info , initially as head of the Politics and Current Affairs program group.

In 1998, Knuth became the head of NDR Info and radio editor-in-chief. From 2008 to 2020 he was radio program director and played a key role in organizing the newly created German Radio Prize .

In June 2019, he was nominated as a candidate for election as director of the NDR on the NDR Board of Directors and was elected by the Broadcasting Council on July 5, 2019, with no opponent. For Knuth there were 40 votes in favor, 6 abstentions and one against. On January 13th, 2020 he succeeded Lutz Marmor .

Knuth volunteers, among other things, as a member of the board of directors of the Protestant foundation “ Das Rauhe Haus ” in Hamburg.

Joachim Knuth is married to the Hamburg provost and pastor Ulrike Murmann and has three children with her.

Acting directors in the ARD