This article deals with the Bishop of Metz and Strasbourg. For the Grand Master of the German Order of the same name, see Karl Alexander von Lothringen , for the Archbishop of Cologne see Karl III. Joseph of Lorraine . 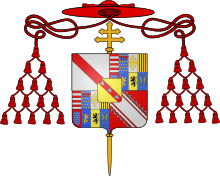 Charles of Lorraine (born July 1, 1567 in Nancy ; † November 24, 1607 ibid) was Bishop of Metz and Strasbourg and Cardinal of the Roman Catholic Church.

Charles of Lorraine's parents were Duke Charles III. of Lorraine and Claudia of Valois . Elector Maximilian I of Bavaria , who had married his sister Elisabeth, was the prince's brother-in-law. His aunt Renata of Lorraine , his father's sister, is venerated as a blessed. Prince Karl studied at the Pont-à-Mousson University and the Sorbonne in Paris.

Bishop of Metz and Cardinal

As a child, Prince Charles of Lorraine was appointed Bishop of Metz on July 18, 1578, which, however, only meant a title because of his age; He was ordained priest and bishop only years later. Until he reached the canonical age of ordination, the Pope ordered the administration of the diocese through Bishop Nikolaus Bosmard of Verdun . On August 22, 1585, the Holy See entrusted Prince Charles with the management of secular and, in 1586, spiritual affairs.

With the help of the Jesuit order, Karl campaigned for church renewal in Metz in the spirit of the Council of Trento , held a diocesan synod in 1588 and settled Capuchins and Paulans in his district . Pope Sixtus V elevated Charles of Lorraine in the consistory of December 20, 1589 to cardinal , Gregory XIV appointed him cardinal deacon with the title of Sant'Agata in Suburra on April 5, 1591 during a trip to Rome . At the same time he appointed him apostolic legate for the duchies of Lorraine and Bar as well as the three dioceses . During the absence of his father, Prince Karl took over the administration of the two duchies of Lorraine and Bar on several occasions . The father tried to establish a diocese in Nancy for him with the Pope , but this failed.

Charles of Lorraine was elected Bishop of Strasbourg in 1592, but was only able to take office after lengthy disputes. The Cologne prince-bishop and elector Gebhard Truchseß von Waldburg , who had converted to the Protestant creed and married Countess Agnes von Mansfeld , retired after his expulsion to the Strasbourg monastery, where he died as a canon. Other Protestant cathedral capitulars from Cologne also came with him , as they had benefices at the local cathedral monastery . With the support of the majority of the Protestant citizens of Strasbourg, they were able to bring the cathedral chapter under their control.

The Catholic Canons and Bishop Johann IV von Manderscheid-Blankenheim withdrew to Saverne and declared themselves the only legitimate chapter of the diocese of Strasbourg, which was also confirmed by the Holy See.

Bishop Johann von Manderscheid died in 1592 and there was a double election. The Protestant cathedral chapter elected the 15-year-old Margrave Johann Georg von Brandenburg as the new bishop, but this was not recognized by the Holy See. The Catholic canons, on the other hand, elected the Bishop of Metz, Charles of Lorraine, as the new Strasbourg Shepherd on June 9, 1592. The election was confirmed on July 1, 1592 by Pope Clement VIII . However, Charles of Lorraine was only able to exercise his office to a limited extent, as the minor bishop Johann Georg von Brandenburg and the Protestant faction behind him held the diocese.

It came to the so-called Strasbourg chapter dispute with armed conflicts between the two parties, which ended in 1593 with a provisional compromise, which left Karl of Lorraine in the left bank of the Rhine and Johann Georg in the right bank of the diocese to rule. The latter introduced the Reformation in his area , abolished, among other things, the monasteries of All Saints and Ettenheim Munster and pledged them to Duke Friedrich I of Württemberg .

Finally, Emperor Rudolf II ended the political split in the diocese in 1599 with a vote for Charles of Lorraine. Despite papal and imperial rejection, Johann Georg von Brandenburg did not renounce his claims until November 22, 1604 in the Hagenau Treaty in return for payment of 130,000 gold pieces and a lifelong annuity of 9,000 guilders annually.

Bishop Charles of Lorraine was then able to take possession of his entire diocese. The prince renewed the diocese sustainably. As early as 1596 he had begun a clergy reform and visitations based on the model of Saint Charles Borromeo , he promoted pilgrimages on Mount Odile and in Marienthal , held a diocesan synod in 1605 and supported the Jesuits' branches .

Karl von Lothringen died in Nancy as a result of a painful spinal cord disease from which he had suffered since he was 25 years old. At times he could no longer walk, ride or drive, but always had to be carried in a litter. In addition, he suffered from paralysis, which only allowed his tongue to move, and he was plagued by severe pain. From 1602 he was better, was largely free from pain and could at least use his hand to write; nevertheless he remained tied to the bed. Despite his frailty and the unfavorable circumstances of the time, he managed to implement the reforms of the Council of Trent in two dioceses.

“He had an excellent mind, a sure judgment, great experience in state affairs and a very fortunate memory, at the same time he was extremely gentle, condescending, kind, pious and generous; he took great care of his subjects and visited them often to hear their complaints, and he carefully directed his mind to everything that concerned the glory of God and the salvation of souls. "

Prince- and Archbishops of Strasbourg (since 1506)
( Predecessor: Albrecht von Pfalz-Mosbach )