Just a few years after the first Wuerttemberg hydropower plant in Cannstatt (1888), the Fürstlich Hohenzollernschen Hüttenwerke (since 1989 Zollern GmbH and Co. KG ) in Laucherthal , the most modern company in the Hohenzollern region , switched to electricity during a boom. The energy, which was still quite new at the time, came from its own power station, which was powered by Lauchert's hydropower . In addition to the workshops of the iron and steel works, it also supplied the village of Laucherthal, the town of Sigmaringen and the Hohenzollern Castle .

In order to further advance the electrification of Sigmaringen, the first power station “Laucherthal secondary station” with a water turbine on the Danube weir below the castle between Schlossfelsen and Mühlberg was put into operation on October 18, 1893. The old “Hofmühle” was used as a power station for a short time until it was demolished in 1898. A turbine went into the second mill building. The gas consumption and thus also the generation in the Sigmaringen gas factory decreased noticeably, as the electricity company supplied the castle, several hotels and also private households with electric light. The waste of electricity grew; electricity meters were installed.

The electrification work on the castle caused a major fire on April 17, 1893, which almost completely destroyed the east wing of the castle.

However, the electrical retail company associated with the power station, today's EZS - Fürstlich Hohenzollernsche Elektrozentrale Sigmaringen GmbH & Co. KG , remained excluded from the sale . Since 1990 it has been subordinate to the Princely Hohenzollern Court Chamber ( reorganized as the Fürst von Hohenzollern Group in 2006 ), which is also based in Sigmaringen.

The building of the Princely Hohenzollern Electricity Works, which was built in 1893/94 and is now a listed building, received a comprehensive exterior renovation in 2006. After the roof leaked, the old roof tiles were removed and then completely re-covered. In addition, the stepped gables were renewed, the windows replaced and extensive flasking work carried out. The new facade painting was done in consultation with the State Office for Monument Preservation Baden-Württemberg . The power station is still used, if not in its original sense. There is an apartment on the upper floor and the vehicle fleet with two garages (formerly a car workshop) in the lower area. The owner is the property management of the Fürst von Hohenzollern group of companies.

Weir of the power station

In 1995 the Stadtwerke Sigmaringen acquired the city's power grid from EVS at a price of DM 29.4 million at the time. The original purchase price was 45 million marks. 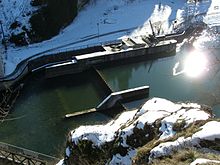 Due to a modernization measure on the Danube weir Sigmaringen, a new hydropower plant was installed at the same time in 1996. The construction time was four months. For this purpose, a belt tube turbine with a diameter of almost four meters was let into the Danube. The so-called Schloss hydroelectric power station uses the natural runoff of the Danube.

Together with the Laiz hydropower plant , the two plants together produce an average of around 2.1 million kilowatt hours of electricity annually. This corresponds to around three percent of the total electricity consumption or the supply of 600 households over an entire year.