The run-of-river power plant, which went into operation in 1977, has an electrical output of 7.2 MW and an average annual production of 49 million kWh. Two Kaplan turbines with an impeller diameter of 4.7 meters drive two generators with a nominal output of 3.6 megawatts each  . The expansion flow is 240 m³ / h. The power house is located on the left bank of the southern arm of the Danube.

The engine with a Kaplan bulb turbine , which was commissioned in 1990, has an electrical output of 2.25 MW and an average annual production of 14 million kWh. Its underwater is the northern arm of the Danube. 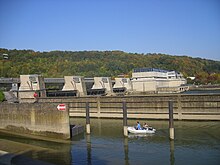 In the southern part of the barrage there is a sport boat lock and a boat lane , as the European Canal is closed to these vehicles. A service bridge, which is open to cyclists and pedestrians, runs across the entire dam.

The generator house is located between the two weirs near the western tip of the Danube island Oberer Wöhrd .

Hydroelectric power plants on the Danube