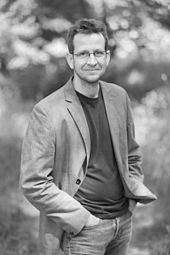 Leonhard F. Seidl (born May 16, 1976 in Munich ) is a German writer, editor, columnist, journalist and social worker and lecturer in creative writing.

Seidl grew up in Isen, Upper Bavaria, where his father Leonhard Michael Seidl , who also worked as a literary artist, still lives. After training as a nurse , he began studying social work in 1995 .

Seidl works as a social worker, lecturer in creative writing, journalist, biographer and freelance author. The anthology Stumme Schreie emerged in 2006 from the writing workshop “Described Leaves” in the Ebrach prison . His diploma thesis Described Leaves - Creative Writing with Delinquent Adolescents (2007) was awarded the City Mission Nuremberg Prize in cooperation with the Evangelical University of Nuremberg due to its special practical relevance . Seidl is also a columnist for the Wednesday literary series of the Fürther Nachrichten "Fürther Freiheit".

His reports, articles and comments appear in the Erlanger Nachrichten , Fürther Nachrichten , Nürnberger Nachrichten , the Bayerische Staatszeitung , Neues Deutschland and the taz . He also published a number of reports in the self publisher and text type - Magazine for Creative Writing.

From 2008 to 2017 he was Seidl of the literary competition of the Nuremberg culture shops, 2012 juror of the literary competition of the young voice eV on the subject of everyday racism. In addition, since December 2012 he has been the sponsor of “ School without Racism - School with Courage” at the Laurentius-Gymnasium Neuendettelsau and since May 2013 at the Josef Mayr Nusser Academy for Social Pedagogy in Erlangen. In 2013 he worked on the exhibition The victims of the NSU and the reappraisal of the crimes .

He made his novel debut in 2011 with the book Mutterkorn . It was u. a. the attack attempted by neo-Nazis on the laying of the foundation stone of the Jewish cultural center in Munich in 2003 is the subject of discussion The novel was nominated for the August Graf von Platen Prize . His detective novel Genagelt (2014) takes place in Isental in Upper Bavaria and deals with the Isental motorway, prejudice and corruption. His crime novel Fronten (2017) was inspired by a true case in Dorfen , Upper Bavaria , which happened in 1988. In July 2019, his novel Fronten was premiered by the Stadttheater Fürth . The work on his next novel was funded by the Literature Foundation.

Seidl counted in 2018 with Zoë Beck , Klaus Farin , Nina George , Michael Wildenhain , Sophie Sumburane u. a. on the first signatories of “Our answer for democracy and human rights” (“Answer 2018” for short), which was published on March 29, 2018 in response to a declaration written by Uwe Tellkamp and Vera Lengsfeld , among others . It says: "We show solidarity with all people who seek refuge from war, persecution and poverty in our country."

In 2018 he protested against what in his opinion was too mild a verdict against NSU supporter André E.

Seidl is a member of the PEN Center Germany , the authors ' group Wortwerk (with Christian Schloyer , Tobias Falberg and others) and the New Society for Literature Erlangen (with Fitzgerald Kusz , Nevfel Cumart , Ewald Arenz and others).

During the literary scholarship of the Medieval Crime Museum in Rothenburg ob der Tauber , Seidl turned to the mayor because souvenir shops had offered Reich war flags. The owners removed them after the police spoke to them.