Minardi M191B and Minardi M191L , the model names of a Formula 1 - racing car of the former Italian motor sports teams Minardi . The vehicles were further developments of the M191 from 1991 and at the same time transitional models that were reported for the first four races of the Formula 1 World Championship in 1992 before the largely newly developed successor M192 was ready for use.

The Faenza- based racing team Minardi was founded in 1969 as Scuderia del Passatore . In 1972 Giancarlo Minardi , the son of a wealthy Fiat dealer, took over the team and, in the meantime under the name Suderia Everest , led it from Formula Italia to Formula 3 to the Formula 2 European Championship , in which it started in 1980 competed with self-constructed racing cars. When the FIA replaced the Formula 2 European Championship with the International Formula 3000 Championship in 1985 , the team, now known as Minardi, did not take part in the change and instead became involved in Formula 1. Minardi started in 1985 with self-designed racing cars and turbo engines Motori Moderni , which Carlo Chiti designed and built for the team. The team achieved little success in the first few years. Due to poor funding of the racing team and continued unreliability of the engine, there were no world championship points until 1987. The situation improved with the switch to Cosworth naturally aspirated engines in the 1988 season . This year Minardi drove in the first world championship point, in 1989 there were six, with which 11th place in the constructors' championship was achieved. Minardi had become a team of midfield.

In 1989 the turbo era of Formula 1 ended. Unlike in previous years, with the introduction of the 3.5-liter naturally aspirated engine formula, the most successful racing teams no longer relied on widely available, standardized customer engines from Cosworth or other manufacturers, but instead entered into exclusive partnerships with major automobile manufacturers. So referring McLaren as its engines from Honda , Williams , however, used engines from Renault . Some smaller teams tried to benefit from this development as junior partners. Tyrrell, for example, was briefly supplied with Honda engines as a B-Team, and Renault made its ten-cylinder engines available to the French Équipe Ligier . In the course of 1990, Giancarlo Minardi took a similar step: After Scuderia Everest had already competed in Formula 2 with six-cylinder engines from Maranello, Minardi was the first regular customer team to receive Formula 1 engines for the 1991 Formula 1 World Championship the Scuderia Ferrari . Initially they were at the level from 1989 (Tipo 036), later they were engines from 1990 (Tipo 039). The results, however, fell short of expectations. Minardi drove in 1991 only six world championship points and finished seventh in the constructors' championship. After only one year, the three-year connection was dissolved again, partly because Minardi could not finance the high leasing costs for the Ferrari engines for another year. Ferrari then supplied Minardi's rival team BMS Scuderia Italia the following year instead .

Minardi then started in 1992 with customer engines from Lamborghini Engineering . The company, which was originally founded with Chrysler funds, had only indirect connections to the sports car manufacturer Lamborghini , but used its name, which at the time also belonged to the Chrysler Group. Lamborghini's twelve-cylinder engine, which had been developed by Mauro Forghieri , made its debut at Larrousse in 1989 and was still available to this team in 1992, which had since been registered as Venturi Larrousse . For the Lamborghini engine, Minardi developed a new car called the M192. However, the car was not yet ready for use at the beginning of the 1992 season. For the first races of the year, Minardi converted last year's M191 vehicles, which were actually designed for Ferrari engines. The old chassis adapted to the Lamborghini engine were given the designations M191B and M191L.

Minardi used the names M191B and M191L alternatively for the interim model. The different letter additions did not indicate any technical independence; rather, the cars were largely the same. First, Minardi converted the last two 191 chassis produced in 1991 to Lamborghini technology. They were named M191B / 5 and M191B / 6. Two vehicles that were created a little later were given the designations M191L / 2 and M191L / 3, with the "L" referring to Lamborghini. It is also conceivable, although not proven, that the M191 / 5, which only appeared once, was subsequently renamed the M191L / 3. 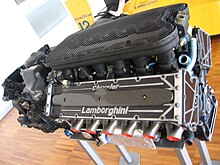 The M191B and M191L had monocoques made of carbon fiber reinforced plastic . They resembled the chassis of the M191 from 1991. The suspension was also unchanged. Double wishbones and internal spring-damper units operated by push rods were installed at the front and rear , the dampers came from Koni . Like all the other teams, Minardi used Goodyear tires this year .

The M191B and M191L were powered by the twelve-cylinder V-engine Lamborghini 3512 . The engine had a bank angle of 80 degrees. The displacement was 3494 cm³. Each bank of cylinders had two overhead camshafts that were driven by gears. There were two intake and two exhaust valves for each cylinder. Lamborghini procured the injection system and the ignition from Bosch . The engine output was estimated at 655 hp. It was about 10 hp above the eight-cylinder engines from Ford Cosworth and almost 50 hp below those of the Ferrari engine.

Minardi took over the transverse six-speed transmission from Lamborghini Engineering. In fact, it was essentially the design that Larrousse had developed for the Lamborghini engine back in 1989 and later sold to Lamborghini out of financial difficulties. In parallel, Minardi began to develop a semi-automatic transmission; however, the project was ultimately not realized.

Minardi started again in 1992 with Gianni Morbidelli as driver. The second chassis went to Brazilian debutant Christian Fittipaldi , who replaced Pierluigi Martini who had switched to Scuderia Italia . Both drivers contested four races with the M191B and M191L. An M191L was reported as a replacement vehicle in two other races.

As in the previous season, Minardi was exempt from pre-qualification in 1992. Fittipaldi and Morbidelli succeeded in qualifying at all Grand Prix for which the M191B and M191L were registered. However, each driver only managed one finish; Minardi did not score world championship points with the M191B or M191L.

At the opening race of the 1992 season in South Africa , both Minardis were on the 10th row: Morbidelli took 19th place on the grid, Fittipaldi 20th place. Before them, Ukyō Katayama started in Larrousse's identically motorized Venturi LC92 , while his teammate JJ Lehto qualified for 24th place. Both Minardi drivers retired in the race: Fittipaldi's car had an electrical fault after 43 laps, while Morbidelli, who had already suffered two engine failures in the practice sessions, had to retire after 55 laps with a defective engine. There was also a double retirement in Mexico : Both drivers went off the track after driving errors on the third (Fittipaldi) or 30th lap. At the third race of the season in Brazil , Minardi recorded the first finish of an M191B: Morbidelli, who started the race from 23rd place, crossed the finish line in seventh place, two laps behind the winner Nigel Mansell ( Williams ). He was ahead of the two Venturi Larrousse pilots, who finished eighth and ninth. Fittipaldi retired from his home race after 54 laps due to a gearbox failure. The Spanish Grand Prix was the last race for the M191B and M191L. Fittipaldi qualified on the Circuit de Catalunya for 22nd, Morbidelli for 25th on the grid. Morbidelli gave up after 26 laps due to handling problems, while Fittipaldi crossed the finish line four laps behind in eleventh.

From the subsequent race in Imola , both Minardi drivers drove the new M192.