The University of Lviv ( Ukrainian Львівський університет , Polish Uniwersytet Lwowski , Latin Universitas Leopolensis ) in Lviv is the oldest university in Ukraine . In 1998, 11,649 students were enrolled and the number of employees was 3,301.

The university currently bears the name of Ivan Franko .

In 1608 a Jesuit school was founded in Lwów, then part of Poland-Lithuania . In 1661 it was converted into an academy by the Polish King John II Casimir . There were theology , philosophy , mathematics , law , medicine and art taught. In 1667 there were around 500 students. The approval of the Pope , which was common in Catholic countries at the time, to found a university , was not given until 1759 by Clemens XIII. granted.

In the Kingdom of Galicia and Lodomeria (1861-1918) the rector of the university had a virile vote in the Galician state parliament .

The university was re-established in 1784 by Joseph II . It was Germanized in 1817 after the Congress of Vienna . After Austria's defeat in the German War , it was Polonized again in 1867 . In the academic year 1890/1891 1255 students were enrolled; 383 of them studied law, 358 theology and 189 philosophy. After the First World War came to Poland in 1920 , the university was named after King John II Casimir . With the annexation of Eastern Poland by the Soviet Union in 1939, the university came under Soviet administration and was renamed the Ivan Franko State University on January 8, 1940 . Teaching was reorganized in the communist sense, with numerous reprisals against professors and students being exercised at the same time. This terror against university members intensified after the German invasion of the Soviet Union in June 1941. Many professors and students were shot. The university was closed. Only after the end of the German occupation of Lwów in July 1944 could it be reopened.

Today the university has 16 faculties with 53  chairs and 114 fields of study with more than 1500 teaching staff. A total of around 22,000 students study there. The university library has an inventory of over three million books. 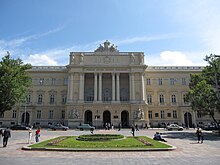 The lawyer Ignaz Beidtel taught Roman civil and Austrian canon law from 1810 to 1816 .

Stanisław Konstanty Pietruski studied science from 1828 to 1830 at the University of Lviv.

Kazimierz Twardowski took over the chair of philosophy in 1895 and founded the Lemberg-Warsaw School .

The botanist Jadwiga Wołoszyńska was the first graduate of the university in 1907, receiving her doctorate in 1912.

Tadeusz Kotarbiński received his doctorate in philosophy in 1912 , he belongs to the Lviv-Warsaw School.

The geographer Eugeniusz Romer studied, received his doctorate (1894) and qualified as a professor at the University of Lemberg. From 1911 to 1931 he worked here as a professor.

In the time of the Second Republic of Poland there was a competition of mathematical schools between the Polish universities , so there was the Lviv Mathematician School ( Lwowska szkoła matematyczna ) around Stefan Banach and Hugo Steinhaus .

The physicist and later politician Ihor Juchnowskyj studied at the university from 1946 and was head of the theoretical physics department from 1951 and head of the newly founded department of statistical theory of condensed matter from 1969.

In the massacre of the Lviv professors on July 4, 1941 and in the following days, 45 Polish university members and their families were killed by the German occupiers, including the rector of the university, the lawyer Roman Longchamps de Bérier and his two sons. At reminds today in Wroclaw a monument on Plac Grunwaldzki between two buildings of the Technical University of Wroclaw .

Most of the Polish university members moved to Wroclaw after the war.