Niederried bei Interlaken is a municipality in the Interlaken-Oberhasli administrative district in the canton of Bern in Switzerland .

The name "Ried" can be interpreted in two ways: from the Old High German riod, reoth (clearing) or from the Swiss German Ried (land overgrown with reeds and marsh grass). For Niederried and Oberried on Lake Brienz, however, it should be noted that these villages are located on the steep, sunny and dry slope of the Riedergrat. High on the Harder, Rieder and Brienzergrat there are also several corridors called "Ried": Ried in the Ringgenberger Berg, Rieden north above Niederried, Rieden above the village of Oberried and Gäldried, a station on the Rothornbahn. These reeds can certainly not be associated with reeds, but rather with "riod, reoth" clearing. This is clearly indicated by the meaning of “Ried” used on Lake Brienz. With this, Niederried am Brienzersee was most likely founded by the Alemanni in a lower forest clearing and Oberried am Brienzersee in an upper forest clearing. Given the many dry corridors in the villages on Lake Brienz, which are suitable for house building, the settlers would not have been interested in naming their village communities after the flat and therefore marshy and useless Mosers.

First mention of a place called Nidirriet : April 15, 1303. In a dispute between the Lords of Ringgenberg and the Capuchins over Wald between Iseltwald and Bönigen, the following was mentioned among other things: "Werner called im Buole, living in Nidirriet". 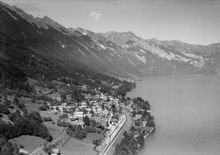 Niederried near Interlaken is located in the Bernese Oberland on the north shore of Lake Brienz . The neighboring communities starting from the north in a clockwise direction are Habkern , Oberried am Brienzersee and Ringgenberg . The highest peak is the Suggiture (2085 m above sea level) on the northern municipal boundary. The lowest point is Lake Brienz at 564 m above sea level. M.

The community president of the community is Beat Studer (as of 2016). In addition to the residents' community, there is also a civic community under this name .

Political communities in the administrative district of Interlaken-Oberhasli