Iseltwald is a municipality in the Interlaken-Oberhasli administrative district in the canton of Bern in Switzerland .

The community is located on a delta on the south bank of Lake Brienz in the Bernese Oberland . For a long time the community had no road and could only be reached by water. Since the construction of the A8 motorway , the municipality has had its own motorway exit. Before the exit was built, a road led from Bönigen into the village. The highest point is the 2687 meter high Faulhorn . 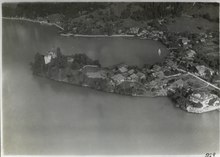 In 1146 the village is mentioned for the first time as Iseltwalt . After a dispute with Interlaken over the important forest, all rights of Iseltwald went to Interlaken in 1303. In 1342 Iseltwald was devastated by the Unterwaldners. With the secularization of the monastery in 1528, the village came to Bern and to the Landvogtei Interlaken. In addition to fishing, fruit growing, livestock and alpine farming, a glassworks offered additional work in 1680. However, this expired again around 1715.

Tourism began in 1871 with the advent of Lake Brienz shipping. Hotels and the hospitality industry emerged. Today mainly day tourists stay in Iseltwald. Iseltwald appears in several episodes in the South Korean television series Crash Landing on You .

Political communities in the administrative district of Interlaken-Oberhasli