Trelle attended the Kassel Friedrichsgymnasium and, after the family moved to Bonn, the local Beethoven-Gymnasium up to the Abitur in 1962. He then studied Catholic theology in Bonn and Innsbruck . Trelle has been a member of the VKTh since the beginning of his studies . Burgundia Bonn. On February 2, 1968, he received the sacrament of ordination through Archbishop Joseph Cardinal Frings in Cologne . After several pastoral care positions, he became pastor and city dean in Wuppertal and, as such, was promoted to monsignor in 1991 . Pope John Paul II appointed him on March 25, 1992 titular bishop of Egnatia and auxiliary bishop in the Archdiocese of Cologne . The Cologne Archbishop Joachim Cardinal Meisner gave him on May 1, 1992 at the Cologne Cathedral , the episcopal ordination ; Co-consecrators were the auxiliary bishop emeritus of Cologne Augustinus Frotz and the Cologne auxiliary bishop Klaus Dick . Trelle was commissioner for the pastoral district south of the Archdiocese of Cologne and at the same time episcopal vicar for the pastoral care of foreign Catholics. Shortly afterwards he also became a resident canon in Cologne.

On November 29, 2005 Norbert Trelle was by Pope Benedict XVI. appointed 70th Bishop of Hildesheim . On February 11, 2006 he was introduced to his office in Hildesheim Cathedral ( taking possession of the Cathedra ) .

In 2015, statements by Trelle came under fire because he played down or veiled cases of abuse in the diocese of Hildesheim.

On September 9, 2017, Pope Francis accepted the resignation submitted by Bishop Trelle for reasons of age.

Motto and coat of arms 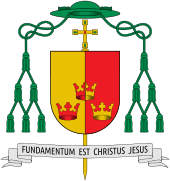 Trelle's episcopal motto reads: Fundamentum est Christ Jesus (“The building ground is Jesus Christ”, based on 1. Corinthians 3:11  EU : “No one can lay any other foundation than that which is laid: Jesus Christ.”)

The coat of arms is split from gold and red, in the lower part of which there are three crowns in mixed up colors. The colors and division of the shield correspond to the Hildesheim diocese coat of arms; the three crowns in the escutcheon are reminiscent of the three wise men , whose shrine is the center of Cologne Cathedral, and their legend, whose most important lines of tradition include the “Historia trium regum” (story of the three kings) of the Carmelite Johannes von Hildesheim . The set behind the shield cross is the cross of bernward inspired and reminiscent of the sacred Bernward of Hildesheim .