This article is about Bishop Josef Homeyer. For the musician see Joseph Maria Homeyer . 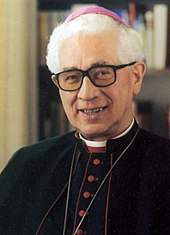 Josef Homeyer was born as the youngest of three children of the married couple August Homeyer called Strotdrees and Elisabeth, nee Herzog. He grew up on his parents' farm in Harsewinkel, attended the Laurentianum High School in Warendorf and then studied Catholic theology and philosophy at the Westphalian Wilhelms University in Münster and at the University of Innsbruck . In 1955 he was with the work of development and concept of sociology as a Doctor of Philosophy (PhD) PhD .

On February 11, 1958, he was ordained a priest by Michael Keller in the St. Paulus Cathedral in Münster . He celebrated his home prime on February 17th of that year in the St. Lucia Church in Harsewinkel. From 1958 to 1961 he was chaplain in St. Josef in Warendorf and in St. Agatha in Mettingen , from 1961 to 1966 diocesan pastor for the Catholic rural people movement , from 1966 to 1971 school clerk in the diocese of Münster . In this position he is one of the initiators and co-founders of the Münster Peace School , the first comprehensive school in the Federal Republic of Germany under Catholic ownership.

During his tenure, Homeyer tried to locate new monasteries in his diocese. On May 5, 1988, the Marienrode Abbey was repopulated with ten Benedictine nuns from St. Hildegard in Eibingen. In the same year Homeyer set up the Research Institute for Philosophy in Hanover .

Homeyer campaigned for the Church in Europe and the universal Church beyond the borders of the diocese. So he founded the partnership with the Church of Bolivia . In accordance with his ordination In mundum universum - Goes all over the world , Homeyer held talks with trade unionists and employers, chaired the forum for justice, peace and the integrity of creation , and advocated the right to vote for foreigners. Homeyer campaigned for an eastward expansion of the European Union and the reference to God in the European and Lower Saxony constitution.

Between 1989 and 1990 Homeyer convened a diocesan synod with priests and lay people to develop future prospects for the diocese of Hildesheim. Shortly before his retirement, he was able to sign the Eckpunkt 2020 concept , which reacts to the falling church tax revenues and the number of believers. For example, parishes are to be merged, churches to be closed and pastoral staff to be reduced.

On August 20, 2004, Homeyer's resignation, which all Catholic bishops must submit when they turn 75, was accepted by Pope John Paul II. On November 29, 2005, Norbert Trelle was appointed his successor .

Homeyer was able to celebrate his golden jubilee as a priest on February 17, 2008 in the parish church of St. Lucia in Harsewinkel, where he celebrated his homeland prime in 1958.

On the morning of March 30, 2010, he died at around 4:30 a.m. after an operation in the St. Bernward Hospital in Hildesheim. He was buried on Saturday, April 10, 2010, in the St. Godehard Basilica in Hildesheim. In the course of the renovation of Hildesheim Cathedral 2010–2014, a bishop's crypt was created; Homeyer's remains were reburied there on November 1, 2014.

In connection with the cases of abuse in Catholic institutions that became known in early 2010 , the bishop emeritus admitted in February 2010 that in two cases the diocesan priests accused of abuse were taken by the diocese leadership during his tenure as bishop "too little seriously and the implications further developments have clearly been underestimated ”. Due to cover-up allegations in the case of Peter R. , who worked at the Canisius College in Berlin and later was a priest in the Hildesheim diocese, he again came under public criticism in 2015. His later successor Heiner Wilmer called Homeyer's handling of abuse allegations “a disaster” in October 2018 and declared that “the then Bishop Homeyer and his diocese leadership had covered terrible things”. In this context, Wilmer also announced that "cases of abuse in his diocese should in future be cleared up with outside help".

The four-part coat of arms shows in fields 1 and 4, again in two parts, the colors gold / yellow and red, the coat of arms of the diocese of Hildesheim . In fields 2 and 3 there is Josef Homeyer's personal coat of arms, on a black background the Greek letter Tau (T), the tau cross as a symbol of redemption. The red / white grid on the rope refers to the founder of the Cistercian order , St. Bernard of Clairvaux , and is reminiscent of the Marienfeld Cistercian Abbey in Homeyer's place of birth, Harsewinkel. The red tongues of fire symbolize the work of the Holy Spirit.

Behind the coat of arms is the bishop's cross, above it the green bishop's hat ( Galero ) with six green tassels (fiocchi), underneath the motto: In Mundum Universum - “In the whole world” ( Mk 16.15  EU ).