The language of the Ojibwe or Anishinaabe ( ᐊᓂᔑᓈᐯᒧᐎᓐ Anishinaabemowin ) belongs to the Algonquin language family and is spoken by almost 80,000 people in several regional variants in large parts of Canada and in the north of the USA . 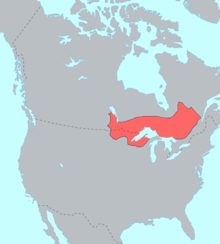 Traditional language area of ​​the Ojibwe

Ojibwe is spoken in Canada in southwest Québec , in Ontario , in southern Manitoba and parts of southern Saskatchewan , in the USA in northern Michigan , in northern Wisconsin and northern Minnesota , and in smaller groups in northern North Dakota and in northern Montana .

Ojibwe is a dialect continuum , to which the variants West-Ojibwe (Saulteaux), Southwest-Ojibwe (Chippewa), Northwest-Ojibwe, Severn-Ojibwe (Oji-Cree), Ottawa (Odawa), East-Ojibwe and Algonquin (in the narrower sense ) belong.

A characteristic of many Ojibwa dialects is the occurrence of the voiced consonants b, d, g, j (dž), z, zh (ž), whereas in other Algonquin languages ​​the unvoiced p, t, k, ch (č), s , sh (š) stand. The following consonants can occur in the various Ojibwe dialects taken together:

All Ojibwe dialects have seven vowels, to which there are nasal equivalents.

Of the seven simple vowels, three are short and four are long:

There are four long nasal vowels:

In the USA, but also in most parts of Canada, Ojibwe is now usually written with Latin letters, with Charles Fiero's system being preferred, in which long vowels are expressed by doubling the letter. The Cree script is still used in northern Ontario and Manitoba , a syllabary script developed by the Methodist missionary James Evans between 1840 and 1846 in collaboration with indigenous people of the Cree and Ojibwe at Norway House on Hudson Bay .

As with many indigenous languages ​​in North America, translations of portions of the Bible make up a large part of the text corpus of the Ojibwe language. The New Testament has been translated three times, once in 1833 by Edwin James, a second time in 1844 by Henry Blatchford (reprints 1856 and 1875) and finally in 1854 by Frederick O'Meara (reprints 1874). O'Meara also translated the Psalms (1856) and the Torah (1861), while Robert McDonald translated the Twelve Minor Prophets in 1874 . A translation of half of the Old Testament including a revision of the New Testament by Jim Keesic in collaboration with Bob Bryce and Henry Hostetler was published in August 2008 by the Canadian Bible Society.

There is little original Ojibwe literature. The American writer David Treuer , who was born in Minnesota in 1970 and has published four English-language novels, plans to compile a first “practical” grammar in this language, his mother tongue. In addition, he makes sound recordings of stories on Ojibwe with speakers in his home region, where the language is mostly only spoken by the elderly.

Ojibwe shares its linguistic structure and complex grammatical structures with the other Algonquian languages ​​(see there: grammar) .

A sample text from the cultural context of the Ojibwe can give an impression of this. This text from Bemidji State University - Niizh Ikwewag (Two Women) - is recorded in the Southwestern Ojibwe dialect and comes from Minnesota, USA.