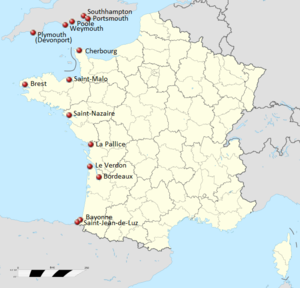 Operation Aerial (also known as Operation Ariel ) was the evacuation of Allied forces and civilians from ports in western France from June 15-25, 1940 during World War II . The evacuation followed the Allied military collapse in the battle for France against Nazi Germany . The Operation Dynamo , the evacuation from Dunkirk , and the operation cycle, an embarkation from Le Havre , ended on 13 June. Allied ships continued to be used to haul British, Polish and Czechoslovak troops, civilians and equipment from Atlantic ports, particularly from St. Nazaire and Nantes .

On June 17, the German air force flew an attack on evacuation ships in the Loire estuary. The ex- Cunard passenger ship Lancastria , which was used as a troop transport and had thousands of members of the armed forces and civilians on board, was sunk. Estimates speak of at least 3,500 deaths.

The official evacuation ended on June 25, in accordance with the terms of the June 22, 1940 armistice agreed by the French and German sides. Unofficially, the evacuation from the French Mediterranean ports continued and did not end until August 14th. Operation Aerial brought 191,870 Allied soldiers to Britain, bringing the total number of military and civilian people returned during the Battle of France to 558,032, including 368,491 British soldiers.

In France, the British General Philip de Fonblanque was still in command of the original BEF's liaison forces, and Lieutenant General Henry Karslake and James Marshall-Cornwall assisted in the leadership. A brigade group (the 157th (Highland Light Infantry) Brigade) of the 52nd (Lowland) Division left for France on June 7, and Brooke followed five days later.

On June 13, the Royal Air Force (RAF) went on a large-scale operation to aid the French armies whose front on the Marne was breached. The Wehrmacht had advanced across the Seine in the west and the French armies at Paris fell back, isolating the French 10th Army on the Channel coast. The German advance threatened the airfields of the RAF Advanced Air Striking Force (AASF), which received orders to withdraw towards Nantes or Bordeaux while they supported the French army as long as they continued to fight.

The French were forced to make divergent retreats without a clear front line being discernible; on June 12th General Weygand had recommended the French government to pursue an armistice, which led to the questionable plan of establishing a defensive position in Brittany .

On the night of June 14th, General Brooke was informed that he was no longer under French command and that he had to prepare for the withdrawal of British forces from France. Marshall-Cornwall was ordered to take command of all British forces in the French 10th Army in Normandy and, while continuing to cooperate, withdraw towards Cherbourg. The remainder of the 52nd (Lowland) Division was ordered back into a defensive line at Cherbourg to cover the June 15th evacuation. The AASF was instructed to send the last bomber squadrons back to Great Britain and use the fighter squadrons to cover the evacuations. The German advance across the Seine paused while bridges were being built, but the advance resumed later that day, with the 157th Infantry Brigade Group fighting with the 10th Army at Conches-en-Ouche . The army was ordered to retreat on a line from Verneuil to Argentan and the River Dives , where the British took over a 13 km front on both sides of the Mortagne-au-Perche- Verneuil-sur-Avre road. The German troops followed quickly and on June 16 the commander of the 10th Army, General Robert Altmayer , ordered the army to retreat to the Brittany peninsula.

Retreat to Brittany and the Southwest

On May 29, the French Prime Minister Paul Reynaud had recommended General Weygand to consider a ceasefire and asked him to consider the establishment of a retreat around a naval port in Brittany. The idea was picked up on June 6th by order from Weygand to start work on a bastion under the command of General René Altmayer.

After the German troops had crossed the Seine, Brittany became a rallying point for British and other Allied units: the 51st (Highland) Division , which had been cut off, was to relocate to Rennes in Brittany; the 157th Infantry Brigade was ordered to Le Mans ; the rest of the division would follow. The 1st Canadian Infantry Brigade of the 1st Canadian Infantry Division arrived in Brest on June 11th and was sent to Sablé-sur-Sarthe on the assumption that two fresh divisions would be enough to allow the 10th Army to retreat and to to take positions prepared on the Brest peninsula. The de facto French Minister of War, General Charles de Gaulle, visited Rennes on June 12 to see the progress of the work on the defense positions; he reported that Quimper was a convenient place for the government to withdraw, as it was easy to get to England or Africa from there by ship ; the prospect of maintaining a bastion in Brittany was not given.

British Prime Minister Winston Churchill last visited France on June 13, met with Reynaud and agreed to withdraw. Brooke met Weygand in Briare on June 14 , where it was agreed that a defense was hopeless, but the will of the civilian leadership had to be respected. Without the support of the 52nd (Lowland) Division on the left flank, the 10th Army was cut off from Brittany when two German divisions first reached the peninsula, forcing the French to retreat south to the Loire. French troops already in the area were able to join the main French force.

The British High Command was initially reluctant to accept the need to evacuate. On June 15, Alan Brooke was informed that "for political reasons" the two brigades of the 52nd Division could not be embarked from Cherbourg. At his suggestion that “valuable hours” were being wasted, he was given permission to embark the artillerymen, but not the infantry. The bulk of the 52nd Lowland Division and the remnants of the 1st Armored Division embarked from 15 to 17 June, a. The improvised formations from the Le Mans area and Normandy left French soil on the evening of June 17 and a rearguard battalion was evacuated on the afternoon of June 18. A total of 30,630 men were transported from Cherbourg to southern England. In Saint-Malo , 21,474 men, mostly from the 1st Canadian Division, were evacuated from June 17-18. There was no loss. 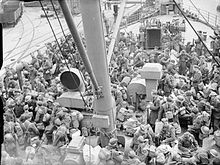 As for Brest, urgency was required of the London Cabinet ; the evacuation was carried out quickly, which led to some confusion. Guns and vehicles that could have been loaded were unnecessarily destroyed. It was known that the Wehrmacht was in Paris and advancing south. However, information on German progress was imprecise and mainly consisted of rumors. The ships, including the Arandora Star , Strathaird and Otranto , carried 28,145 British and 4,439 Allies, mostly RAF ground personnel, from June 16-17. Ships that still had capacity were directed to St. Nazaire and the French destroyed the port facilities of Brest with the help of a British demolition squad. The French ships were also heading south of England and on June 19 the demolition squad was taken on board HMS Broke , with Brest being militarily abandoned.

The operations at Saint-Nazaire on the Loire estuary and 80 km upstream in Nantes took place simultaneously. Unclear and contradicting information led the Navy to believe that 40,000 to 60,000 men were en route to Nantes. But you didn't know when they would arrive. To transport so many men, the destroyers HMS Havelock , HMS Wolverine and HMS Beagle as well as the transporters HMS Georgic , HMS Duchess of York , HMS Franconia , RMS Lancastria , the Polish passenger ships Batory and Sobieski and several cargo ships were pulled together.

Despite the lack of anti-submarine defense, the ships had to anchor in the Bay of Quiberon , 32 km northwest of the Loire estuary. The evacuation began on June 16, when 16,000 soldiers set off for home on the Georgic , the Duchess of York and the two Polish ships. German bombers attacked the bay, but could only damage the Franconia . The loading of the equipment continued overnight and more ships from England and Brest arrived, along with two other destroyers, HMS Highlander and HMS Vanoc . RAF fighters flew up to six missions a day.

The sinking of the Lancastria before Saint-Nazaire

On June 17, the largest ship under the Armada off Saint-Nazaire was the Lancastria, measured at 16,243 GRT . Normally it was allowed to have up to 1,700 passengers and 375 crew members on board. The evacuation was unaware of such restrictions. While at anchor, the ship, with over 6,000 people on board, was attacked and sunk by Junkers Ju 88 fighter aircraft belonging to the German Kampfgeschwader 30 . Almost 2,500 people were saved, while more than 3,500 men, women and children were killed.

The last 4,000 British soldiers left France at 11:00 a.m. on June 18 in two convoys consisting of 12 small merchant ships and heading for Plymouth . Much of the equipment was left behind after alarming reports led to the rush to cast off the convoys. In the afternoon it was heard that 8,000 Polish soldiers were approaching the port. Six destroyers and seven troop carriers were sent back to Saint-Nazaire and arrived on June 19. However, they found only 2,000 men and these were not directly harassed by the Wehrmacht. Unusable hurricane planes were destroyed. The rearguard set out a few hours before the arrival of German tanks with transport planes.

A Royal Navy destroyer arrived at La Pallice , the trading and deep-water port of La Rochelle , on June 16, and evacuation began the next day. Ships for 10,000 men were requisitioned in the port. On June 18, the transport set sail for southern England. On June 19, another transport for around 4,000 Polish troops took place and on June 20 a search was again made for those who remained. The British troops in France were almost completely evacuated, but Polish and Czechoslovak troops, embassy and consulate employees as well as British and other civilians were still waiting for the opportunity to evade German access. 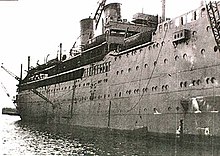 Arandora Sta r 1940 in service with the Royal Navy 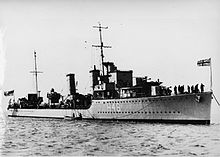 Bordeaux and Le Verdon-sur-Mer on the Garonne , Bayonne at the confluence of the Nive and Adour and Saint-Jean-de-Luz near the border with Spain are ports on the Bay of Biscay that were also used as part of Operation Aerial.

The HMS Arethusa was stationed off Bordeaux on June 16 to ensure radio communications. On June 17th, British and Allied ships with Polish and Czechoslovak troops and civilians set sail for England. The HMS Berkeley had been made available to the French government and evacuated remaining British consular staff from Bordeaux on June 19. The Berkeley was replaced by the cruiser HMS Galatea and moved to England with the high-ranking passengers.

In Le Verdon and Bayonne on June 19, the Polish ships Batory and Sobieski took about 9,000 Polish soldiers on board. The British steamers Ettrick and Arandora Star took everyone they could find on board and set sail for Saint-Jean-de-Luz on June 20. The evacuation there officially ended on June 25 at 2:00 p.m., shortly after the deadline set in the ceasefire agreement. The last to leave were the cargo steamers Baron Kinnaird , Baron Nairn and Kelso, laden with troops and civilians .

On the last day of the operation, the Canadian destroyer HMCS Fraser was accidentally rammed by the anti-aircraft cruiser HMS Calcutta in the Gironde estuary and sank, killing many people.

Figures published in 1953 said that by the end of the unofficial evacuations on August 14, after 366,162 men were rescued in Operation Dynamo, another 191,870 people had been evacuated in Operation Aerial and subsequent operations, mainly in the Mediterranean; a total of 558,032 people, of whom 368,491 were British troops. It was later found and compiled that many civilians had fled the French Atlantic and Mediterranean ports to England via Gibraltar and that 22,656 more civilians left the Channel Islands for Great Britain between June 19 and 23 .