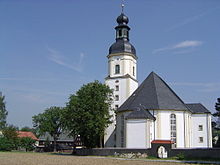 Pretzschendorf ( ˈPrɛtʃendorf ) is a district of the Saxon community of Klingenberg in the Saxon Switzerland-Eastern Ore Mountains district .

The place lies at the foot of the Osterzgebirge and borders in the north on the Tharandt Forest , where the geographical center of Saxony can be found at Colmnitzbach in Tännichtgrund . To the east of Pretzschendorf lies the Klingenberg dam . 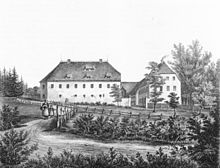 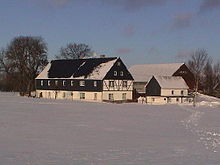 Vierseithof in the upper village

In 1551 a manor is mentioned here . The two places Ober- and Niederpretzschendorf existed until the 19th century. Oberpretzschendorf in turn had a district of Kleinpretzschendorf . During the time of the plague in Europe, 762 residents of Pretzschendorf died. 1732, the foundation stone for was new church laid , the construction with the completion of the church tower ended 1734th The first schoolhouse was built in 1828, before that there had been a church schoolhouse in the village since 1539.

After the introduction of the rural community order in 1839, the chief judge Johann Samuel Lietscher was elected as the first community council. Up until 1856, Ober- and Niederpretzschendorf belonged to the electoral and royal Saxon district authorities of Freiberg . In 1856, both places came to the Frauenstein court office and, after the judiciary and administration were separated, in 1875 to the Dippoldiswalde administration . In 1887, Ober- and Niederpretzschendorf merged to form the municipality of Pretzschendorf.

During the First World War , 83 soldiers from the Pretzschendorf parish lost their lives. During the Second World War , 85 dead, missing or deceased in captivity were registered. In addition, the bronze bells , consecrated in 1900, were melted down in 1942 . Between 1898 and 1971 the narrow-gauge railway Klingenberg-Colmnitz-Frauenstein ran through Pretzschendorf with two stations in the village. Due to the second district reform in the GDR , Pretzschendorf came to the Dippoldiswalde district in the Dresden district in 1952 , which was continued as the Saxon district of Dippoldiswalde from 1990 and to the Weißeritz district in 1994 and to the Saxon Switzerland-Eastern Ore Mountains district in 2008.

The remains of the old manor were demolished in 2004. On December 31, 2012, Pretzschendorf and Höckendorf merged to form the municipality of Klingenberg.

Population development of the former municipality of Pretzschendorf with its respective districts, as of December 31st

The last local council was elected in the local elections on June 7, 2009. It was composed of the mayor and 18 councilors. The last mayor of Pretzschendorf was Kerstin Winkler ( CDU ), who was elected with 85.4 percent of the vote. 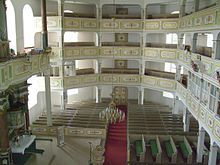 Nave as a transverse octagon

The Agriculture , formerly livelihood for most villagers still plays a significant role in the local economy in addition to small and medium-sized craft firms and tourism. There is a primary school in Pretzschendorf .

Wikisource: Manors and castles in the kingdom of Saxony: Pretzschendorf  - sources and full texts