Sir Roger Gilbert Bannister , CH , CBE (born March 23, 1929 in Harrow , Middlesex , United Kingdom - † March 3, 2018 in Oxford , Oxfordshire , United Kingdom) was a British middle-distance runner and neurologist . On May 6, 1954, he became the first person to run the English Mile in less than four minutes.

Roger Bannister had only started running in 1946, but ran the mile in 4: 18.7 and 4: 17.2 minutes as early as 1948 . At the European Athletics Championships in Brussels in 1950 , he won the bronze medal in the 800-meter run . He was one of the favorites for the 1,500-meter run of the 1952 Olympic Games , but it was inconvenient for him that a semi-final was inserted because of the high number of participants. In the final, despite the British record time of 3: 46.0 min, he missed the bronze medal by 6 tenths of a second in fourth place, which went to West German Werner Lueg . The surprise winner was Josy Barthel from Luxembourg in 3: 45.2 minutes ahead of Bob McMillen from the US at the same time . 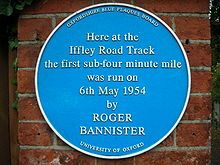 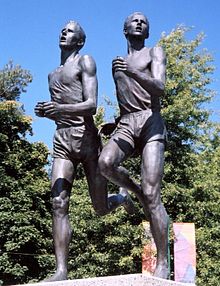 Bannister (left) overtakes Landy, a bronze statue in Vancouver at the intersection of East Hastings Street and Renfrew Street

Bannister now used the break between the Australian and European seasons for his own record attempt on May 6th at the University of Oxford's athletics facility on Iffley Road. The race was broadcast live on the BBC , with track and field legend Harold Abrahams as commentator. Since the windy weather was by no means ideal for a record attempt, Bannister initially toyed with the idea of ​​postponing the record attempt, but decided to start when the gusts of wind calmed down shortly before the start at 6:00 p.m. Initially, Chris Brasher acted as pacemaker for the first two laps, which were covered in 1: 58.2 minutes, then Chris Chataway . In the last half lap, Bannister was on his own. Using all his strength, he fought his way to the finish line and fell exhausted into the arms of his friend Nick Stacey . Stadium announcer Norris McWhirter had the honor of announcing the world record: When he began to read the time, the word “three” caused such a jubilation that the rest of it went down.

Bannister's world record of 3: 59.4 minutes lasted only a few weeks. On June 21, Landy undercut the mark with 3: 57.9 min (rounded up to 3: 58.0 min). On August 7th, both athletes met at the mile run of the British Empire and Commonwealth Games in Vancouver . Only Bannister, who started for England , was able to follow the Australian, who had already taken the lead in the first lap. The race reached its dramatic climax when Landy looked back over his left shoulder on the last corner and Bannister passed him on the right at the same time. Bannister won in 3: 58.8 minutes, and Landy was second in 3: 59.6 minutes. For the first time in a one mile race, two runners stayed under four minutes.

Three weeks later, Bannister won the European Athletics Championships in Bern in the “metric mile”, the 1500 meters, in 3: 43.8 minutes. Although he by the magazine Sports Illustrated for Sportsman of the Year was chosen, he finished after this season his performance sports career and focused from now on his medical training.

His training was a mixture of the best methods known at the time. It was individualized and anticipated a number of elements that were later used successfully by Arthur Lydiard .

Even during his career as a neurologist, he stayed with the sport in many functions. From 1971 to 1974 he was Chairman of the Sport Council of Great Britain and from 1976 to 1983 President of the World Council on Sport Science and Physical Education (ICSSPE). In 1955 he was awarded the CBE and in 1975 he was ennobled by Queen Elizabeth II . He was director of the National Clinic for Nervous Diseases in London and editor of scientific journals in the field of neurology. Bannister was 1985-1993 Master of Pembroke College of Oxford University .

He kept running to keep himself fit until he broke his ankle in a car accident in 1975. In the same year he was knighted and given the title "Sir". In a 2014 BBC interview, he revealed that he had Parkinson's disease.

Note on the 1500 meter best time:
It was set in the same race as his fastest mileage. As was often the case at the time, an additional time measurement was installed at the 1500 m mark.

European champion in the 1500 meter run