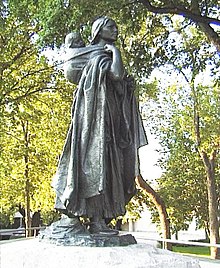 Sacajawea , also Sacagawea or Sakakawea (pronunciation: [ˌsækədʒəˈwiːə] , the name means "bird woman"; * about 1788 in Lemhi River Valley , Idaho ; † December 20, 1812 in Fort Manuel Lisa, in today's South Dakota ), was an Indian . She accompanied the American Lewis and Clark expedition in 1805/06 and is mentioned several times in the diaries of the expedition members. Their contributions to the success of the expedition are the subject of popular literature.

The life of Sacajawea is known only from the journals of the expedition and few mentions in later documents. Around the documented facts, speculations and assumptions were built that made Sacajawea a central figure in the expedition and later activities. Their importance became decisive for the recognition of Indians. With their appreciation in reputation, it was discussed that the success of the expedition, which, according to this view, was largely determined by it, paradoxically, at the same time promoted the spread of whites in western North America and thus the displacement, oppression and extermination of the Indians.

Sacajawea was born to the Northern Shoshone Indians and kidnapped by the Hidatsa Indians when she was about ten years old . As a slave, the Hidatsa she and another young slave named Otter woman to the French-Canadian trappers were Toussaint Charbonneau sold (1767-1843), who lived with the Hidatsa and with them fur trade drove. He eventually considered Sacajawea and the Otter Wife to be his wives - whether they were related by Native American customs or as a common-law marriage has not been recorded.

At the end of 1804 the Lewis and Clark expedition arrived at the Hidatsa. Also known as the Corps of Discoveries designated expedition was by President Thomas Jefferson was commissioned personally, the first in 1803 by Napoleon Bonaparte in the Louisiana Purchase to the United States sold Louisiana to explore and, if possible until the Pacific Ocean to advance. The two leaders Meriwether Lewis and William Clark hired Charbonneau as interpreter for the further expedition. Sacajawea was chosen to accompany the participants because she spoke the Shoshone language. Sacajawea gave birth to their first child Jean Baptiste during the expedition's stay with the Hidatsa in early February and left with the expedition with the infant on his back in April. William Clark mentions in the Journal several times that the lively child contributed to the entertainment of the expedition participants. He later became the foster father of the child, whom he referred to as a baby in the journals mostly with the nickname Little Pomp or Pompey , and he was committed to its excellent international education.

Sacajawea is portrayed as an interpreter and scout for Lewis and Clark. She proved to be knowledgeable about the identification of newly discovered and previously unknown plants and animals. Their language skills helped the expedition when the Shoshone area was reached. In what is now Idaho , they met a group for the first time, and it turned out that a brother of Sacajawea was chief of a Shoshone division and could equip the expedition with horses. The most important contribution to the success of the expedition is their presence. Since Indians did not take women or small children on military campaigns under any circumstances, they concluded from the participation of Sacajawea and their baby that the white people were peaceful. Special contributions by Sacajawea to the success are mentioned twice in the journals, when a boat capsized in the Missouri River she bravely dived for important objects, in contrast to Charbonneau, who made no contribution. And on the Pacific coast she gave her belt in exchange so that Lewis and Clark could buy two sea ​​otters' skins .

The expedition spent the winter of 1805/06 in Fort Clatsop south of the mouth of the Columbia River . Sacajawea made sure that she was allowed to accompany the part of the expedition members who fought their way to the Pacific coast to see a washed up whale and to get bubblers as valuable animal fat.

On the way back, Sacajawea and Charbonneau stayed with the Hidatsa while the other members of the expedition returned to Washington DC. About three years later they accepted Clark's offer to come to St. Louis , where Clark would provide them with a piece of land and pay for Jean Baptiste's education. In 1812 Sacajawea had a daughter named Lisette. Sacajawea died shortly afterwards, on December 20, 1812, at Fort Manuel Lisa , a trading post of the Missouri Fur Company on the Missouri River in what is now South Dakota ; probably from spotted fever ( putrid fever ). It was rumored that Charbonneau had been killed by Indians in the wilds of Upper Missouri, which was not true. But it did not return to civilization until many years later. As a result, William Clark was given guardianship for both children in 1813; Lisette has no other documents; she may have died in childhood. Jean Baptiste enjoyed an excellent education, lived in Europe for years and visited Africa. However, he only took on an administrative role for a short time and died under unexplained circumstances in the California gold rush. 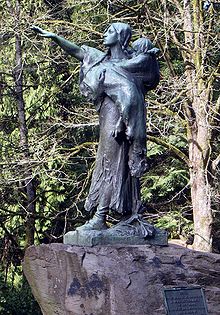 Statue of Sacajawea in Washington Park, Portland, Oregon from 1905

After the expedition returned, the findings were enthusiastically received. Lewis and Clark became heroes, Sacajawea completely forgotten. It was not rediscovered until almost 100 years later, around 1900, by Eva Emery Dye . Dye was an activist for women's rights and sat in Oregon for the women's suffrage a. To do this, she looked for forgotten women who had made significant contributions in the past. In 1902 her book The Conquest: The True Story of Lewis and Clark appeared , in which she portrayed Sacajawea as the central figure of the expedition. Lewis and Clark could only have crossed the west thanks to the accomplishments of Sacajawea. The book and the rediscovery just got along for the expedition's 100th anniversary. In 1905, a world exhibition was held in Portland in memory of Lewis and Clark. Women's organizations across the United States donated money for a statue of Sacajawea with the baby on her back, which was featured at the exhibition. This laid the iconographic model for practically all depictions of Sacajawea to this day. At the official inauguration of the statue, Susan B. Anthony spoke and called for women to vote with reference to the heroine of the past. 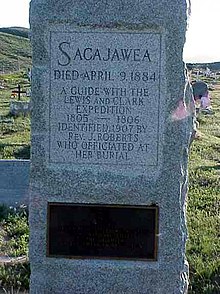 Alleged grave of Sacagawea in the Wind River Reservation, Wyoming

But the further life of Sacajawea after the expedition was still unknown at that time. Grace Hebard , suffragette, economics professor and advisory board member of the University of Wyoming and the first woman to be admitted to the bar in Wyoming, drove to the Shoshone Wind River Indian Reservation after reading Dye's book to learn about the history of Sacajawea explore. That was the wrong place. It is true that most of the Shoshone were relocated to the Wind River area in Wyoming under pressure but without military force in 1868, even before the actual Indian Wars; the Lemhi Shoshone, to which Sacajawea belonged, later moved into reservations much further west in Idaho . Hebard's first informant was a missionary named John Roberts, who vaguely remembered a highly revered Indian woman who was the chief and whom he only knew as "Bazil's mother". He had celebrated her funeral in 1884, shortly after his arrival with the Shoshone. Further memory attempts finally made Roberts explain that "Bazil's mother" must be Sacajawea. Hebard was looking for descendants of the woman among the Shoshone and from 1905 more and more Indians approached her and told more details from the life of the "lost woman" who would have returned to her people after decades of migrations. Hebard put together the life story according to which Sacagawea left her children in the care of Clark and shortly afterwards left her husband because of his violence. She would have gone to the Comanches , remarried there and had several children. After the death of her Comanche husband in battle, she would have returned with two sons to the Shoshone in the Wind River area and would have grown old there with great honor. Hebard published her research in the Journal of American History in 1907 and the newspapers received the story enthusiastically. Sacagawea has been portrayed as the 19th century Pocahontas , friend and savior of white Americans.

About ten years later, doubts arose about the representation. Sacajawea had already been mentioned in the expedition's journal that she had barely survived a serious illness, and an 1811 document mentioned an encounter between a traveler on the Missouri River and the fur trader Charbonneau and his sick wife. Another journal became known in 1920. The buyer for the Missouri Fur Company at the Fort Manuel Lisa Trading Post wrote on December 20, 1812: “That evening, the wife of Charbonneau, a snake squaw, died of typhus. She was a good woman, the best in the fort, and about 25 years old. ”Hebard doubted these representations. Because the name Sacagawea was not mentioned in either document, she defended the thesis that it was Charbonneau's other woman, the otter woman .

Hebard went back to the Wind River Reservation and interviewed the Indians there. Now everyone was declaring that the old woman who died with them in 1884 was Sacajawea. They remembered their name with them: "Paraivo" and reported that she wore a rare medal around her neck that she had received on the expedition. In addition, she would have talked many times about the huge dead fish she saw on the coast. The Bureau of Indian Affairs dispatched an investigator named Charles Eastman and he found that Sacajawea lived with the Shoshone in the Wind River Range and died in 1884. However, his investigations were largely determined by Hebard, who gave him informants. Hebard started other fundraising campaigns, added his own money and erected markings on the alleged burial sites of Sacagawea and her sons Bazil and Jean Baptiste. In 1933 she wrote a great biography of Sacajawea, summarizing all of her research. She died in October 1936.

In 1955 the Newberry Library in Chicago bought a bundle of papers from William Clark. Among them was an account book from the years 1825 to 1828. Clark had scribbled a list in it. Under the heading “Where are you today?” He noted what had become of the expedition participants. On the name Se-car-ja-weau there is the note “dead”. Historian Donald Jackson declared the debate over, although third parties may have mistaken Charbonneau's two wives, William Clark was in contact with the family and would never have made such a mistake. The fact that Clark noted another expedition member as dead in the list, but who was still alive at the time, does not change that. Because Clark had no connection to this for well over a decade.

In the Wind River Reservation, the Indians are still convinced today that Sacajawea would have been around 100 years old with them.

Sacajawea with Jean-Baptiste on her back is depicted on the gold-colored 1 dollar coin known as the Sacagawea dollar , which has been issued since 2000.

After Sacajawea are named:

Sacajawea in the media

Sacajawea also found its way into the visual arts of the 20th century. The feminist artist Judy Chicago dedicated one of the 39 place settings at the table to her in her work The Dinner Party .