The title of this article is ambiguous. Further meanings are listed under São Miguel (disambiguation) .

From a geological point of view, the island consists of two parts that were only connected around 10,000 years ago by volcanism, which is still active today . It is the western part, which essentially consists of the collapse crater Sete Cidades (highest point Pico de Barrosa , 924 m), and the 4 to 5 million year old eastern part with the mountain range of Serra Água de Pau , the highest point of which is the Pico because Vara is 1105 m and which also includes the Pico do Fogo , which was only formed in 1652 by a volcanic eruption. The effect of the volcanism of São Miguel can be experienced impressively in the Furnas Valley. Here there are thermal springs containing sulfur and iron , called caldeiras . The Furnas Lake , on the banks of which volcanic springs are also active, consists of two connected collapse craters. In the caldera Sete Cidades there are two lakes that are connected to each other: Lagoa Azul and Lagoa Verde . The collapsed volcanic cone has a diameter of around five kilometers and a total circumference of 12 km. The diverse hinterland is criss-crossed by hiking trails.

The island was probably discovered between 1426 and 1439 . In 1436, Henry the Navigator authorized the colonization of the Azores from Estremadura , Alto Alentejo , the Algarve and Madeira . Today São Miguel is the most developed island in the archipelago. Ribeira Grande , the 1507 the town charter was awarded, with about 12,000 inhabitants, is the second largest city of the island. After water mills had originally been built here, textile production led to an upswing in the town in the 18th century.

The capital Ponta Delgada is located on the coast in the southwest of the island. The second largest city, Ribeira Grande, is located on the central north coast. Other important places are Lagoa , Vila Franca do Campo and Furnas, east of Ponta Delgada . Very close to Furnas is the botanically interesting Terra Nostra Park , which was laid out at the end of the 18th century by the American Thomas Hickling . The park's lush vegetation includes bamboo , araucarias , tree trellises , hydrangeas and water lilies .

The island of São Miguel belongs to the autonomous region of the Azores and is part of the national territory of Portugal .

The island is divided into six concelhos ( Portuguese districts): 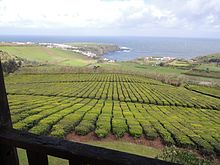 Sugar cane cultivation and the orange plantations created by Hickling went under in the 19th century . The frequent presence of American whalers also led to the migration of some of the sea-experienced male population to the USA and Canada. Commercial whaling was still carried out on the island until the 1960s .

In addition to tourism (including whale watching ), dairy farming and the cultivation of fruit , especially pineapple, play a major economic role for São Miguel today . Furthermore, two of the three only tea plantations ( Chá Gorreana , Chá Porto Formoso ) are located on the island within the European Union (the third plantation is in England near Truro ). The importance of fishing, however, has steadily declined in recent years. The forestry is systematically returned to the original embossed by low fouling landscape restore.

José Bensaude founded a retail chain and a tobacco factory in Ponta Delgada in the 19th century, which became the core of a group of companies that today includes a wide range of activities in tourism, shipping, transport, trade and finance.