Slavkovský les describes a wooded low mountain range between the cities of Karlsbad , Marienbad and Franzensbad . The German name Kaiserwald had a Czech equivalent Císařský les until the end of the Second World War .

To the north the Kaiserwald falls to the Eger basin and Falkenauer basin , in the north-east it extends to the Duppauer Gebirge . The Tepler highlands connect to the southeast . In the southwest the Tachau furrow separates it from the Upper Palatinate Forest .

There are extensive forest areas and peat bogs on an area of ​​803 square kilometers. Noteworthy is especially the Smraďoch ( Stinker ) with its gas release and the nature reserve Kladské rašeliny ( Glatzener Moor ) with its three moors.

The Kaiserwald within the geomorphological division of the Czech Republic 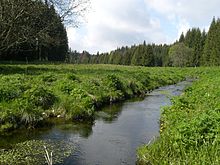 The low mountain range , whose German name is derived from the imperial property, was one of the most profitable mining areas in northern Bohemia. The tin mining around the privileged mining towns of Schlaggenwald (Horní Slavkov), Lauterbach (demolished today), Schönfeld (Krásno), Einsiedl (Mnichov) and Schönficht (Smrkovec, demolished today) was just as well known as the Joachimsthal silver mining.

The Kaiserwald itself is not an old cultural area. There is no evidence of an early settlement. Archaeological finds in the higher elevations only come from the Middle Ages. The settlement of the Imperial Forest is attributable to the colonization activities of the Tepler and Waldsassen monasteries in the 13th century. The first settlements arose in connection with the mining of gold, silver and especially tin. The noble families Riesenburger , von Ossegg ( Osek ) and Pfluger von Rabenstein (Rabstejn) played a key role in the development of mining . A technical masterpiece of mining was the construction of water canals, so-called artificial ditches such as the Long Ditch ( Dlouhá stoka in Czech ) in the 16th century. The Thirty Years War had a negative impact on mining . The consolidation of the economic situation after the Thirty Years' War brought a new boom in handicrafts and guilds in the Kaiserwald. There was a revival of local handicrafts, which often used the local raw material deposits. The first manufactories and factories emerged. At the end of the 18th century, the Kaiserwald became the first location for the Bohemian porcelain industry.

The traditional pewter foundry, the porcelain production, the manufacture of lacquered cans, weapons, knives, needles as well as air stone grinding and gingerbread in Loket are mentioned of the handicraft businesses of the Kaiserwald of the 18th and 19th centuries .

The economic crisis of the thirties led to the decline of mining in the Kaiserwald. After the Second World War, most of the German-Bohemian residents were expelled . A large part of the forest area was initially used as the Prameny military training area . This wiped out some of the old settlements. After the closure of uranium mining, the Slavkovský les nature reserve was established in 1974.