from Wikipedia, the free encyclopedia
This is the spotted version , flagged on November 3, 2019 . There is 1 pending change that has yet to be viewed.

Krásno (German Schönfeld , formerly Czech. Synfelt , too ) is a town in Okres Sokolov in the Czech Republic . It has 660 inhabitants.

The city is located in northwestern Bohemia in the Imperial Forest ( Slavkovský les ) near Horní Slavkov ( Schlaggenwald ). The place was once known for its tin and tungsten ore mining; the last shaft closed in the early 1990s. 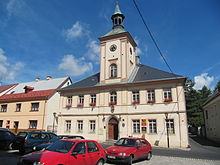 The town grew from a mining settlement and received in 1355 by the brothers Slauko and Boreš of Riesenburg 1355 the law of the jurisdiction and administration of the tin mining in the region of Bečov . In 1380 the town charter followed, granted by Boresch von Riesenburg. In 1547 Schönfeld was elevated to the status of a royal mountain town .

After the First World War , Schönfeld was added to the newly created Czechoslovakia . Due to the Munich Agreement , the place came to the German Reich and until 1945 belonged to the district of Elbogen , administrative district of Eger , in the Reichsgau Sudetenland . After the war, Schönfeld was renamed Krásno (krásno = beautiful).

Since April 12, 2007, Krasno has been a city again after temporarily losing its city rights.

Until 1945 Schönfeld was mostly populated by German Bohemia , which were expelled.

The Krásno Mining Museum is located on the site of the historic Wilhelmschacht ( Vilém ) tin mine , which was founded on the Gellnau corridor system and was in operation with a few interruptions until the 1990s.