Sophie Charlotte zu Mecklenburg has redirected to this article. For the person who had a similar name through marriage, see Charlotte Sophie von Sachsen-Coburg-Saalfeld .

Sophie Charlotte, Duchess of Mecklenburg [-Strelitz] (born May 19, 1744 in Mirow , † November 17, 1818 in the Kew Palace in the Royal Botanic Gardens ) was a German princess who married King George III. when Queen Charlotte became Queen of Great Britain and Ireland (since 1801 of the United Kingdom of Great Britain and Ireland ) as well as Electress of Braunschweig-Lüneburg and later Queen of Hanover . 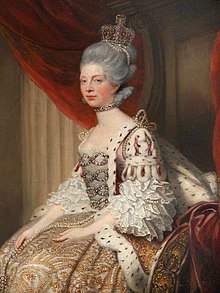 (Sophie) Charlotte was a daughter of Duke Karl (Ludwig Friedrich) of Mecklenburg - a prince apanaged in Mirow and a younger half-brother of Duke Adolf Friedrich III, who ruled in Mecklenburg-Strelitz . - and his wife Elisabeth Albertine , b. Princess von Sachsen-Hildburghausen , a distant cousin of George III's mother, Augusta von Sachsen-Gotha .

Her brother Adolf Friedrich (IV.) Inherited the (partial) duchy of Mecklenburg-Strelitz in 1752 and the family moved from Mirow to Neustrelitz . Charlotte received an excellent education. Among her teachers was the poet Friderike Elisabeth von Grabow , called the "Sappho of Germany". Charlotte soon mastered several languages ​​and was trained in science, arts and home economics alike. She was also a witty letter writer. A fictional letter to the Prussian king, in which she complained about the conduct of the Prussian army in Mecklenburg, gained fame, was printed and thus got to England, which made Prince Georg aware of the princess. However, such a letter was never found in archives and is now considered a PR campaign from the British Crown.

Earl Harcourt, the British envoy, asked on behalf of King George III. for the hand of the princess and negotiated the marriage contract with Charlotte's mother, who was already dying at that time, which was signed on August 15, 1761.

On August 17, Charlotte left her home and traveled via Hanover to Stade , where she boarded the royal yacht. During the crossing to England she had rehearsed "God save the king" on her harpsichord while all of her travel companions struggled with seasickness. On September 8, 1761, she reached the St. James Palace, where she met her husband for the first time. The official wedding took place in the royal chapel on the same evening. 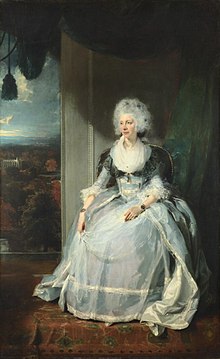 It was evident early on that the marriage started well and that both partners seemed happy. During a visit to the theater shortly after the wedding, the crowd crowded the royal carriage so enthusiastically that four people were crushed to death in the process.

Charlotte's coat of arms as queen

On September 22, 1761, 17-year-old Charlotte and her husband six years her senior were crowned. The young queen made rapid progress in learning the English language, loved playing cards and horse riding, and enjoyed entertaining the court with singing and the harpsichord. On August 12, 1762, she gave birth to the heir to the throne , who was to be followed by fourteen more children.

The royal family lived an almost middle-class, simple and uncomplicated everyday life in the Kew Palace . The king and queen took care of the upbringing of the children, especially the queen of religious instruction. Charlotte showed great interest in expanding the royal botanical gardens in Kew. Her previous training with the Lutheran theologian Gottlob Burchard Genzmer u. a. in natural philosophy , mineralogy and botany she benefited from this. For her services to the Botanical Gardens, she was later awarded the honorary title "Queen of Botany" by the British people. Kew Gardens is one of the most beautiful gardens in Great Britain, which is also attributed to the influence of Queen Charlotte.

Charlotte was considered very simple, she never got involved in politics. She was absorbed in her household chores and taking care of her children. At the beginning of her husband's illness, which at the time was misinterpreted as madness, he was placed in her care, but he could not get her to visit frequently. She was very close to her granddaughter Charlotte , who was her only legitimate granddaughter until her death in 1817, after her sons in particular proved to be a great disappointment. Their escapades and wasted money seriously damaged the reputation of the royal family. In 1796, Charlotte's carriage was pelted with stones, injuring her face.

In 1811 King George III suffered another relapse from which he never recovered. He went blind and was completely mentally confused for the rest of his life, with Charlotte in charge of the person of the king. The couple lived secluded in Windsor. After the death of her favorite granddaughter Charlotte, she lost all will to live and, after having been Queen of England for 57 years, died on November 17, 1818 at Kew Palace with her children. 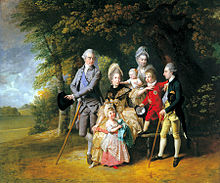 Queen Charlotte with her children and brothers , painting by John Zoffany , 1771–72

Several cities, towns, and counties in the British colonies of North America were named after her in honor of Queen Charlotte. Seven cities or towns in the United States bear her name, including the city of Charlotte in the US state of North Carolina , which was founded in 1762 .

Queen Charlotte is indirectly the namesake of the Queen Charlotte Islands in British Columbia on the Pacific coast of Canada , since 2009 the official name of these islands is Haida Gwaii.

There are also other place names in other former British colonies, such as Fort Charlotte in Kingstown , the capital of the Caribbean state of St. Vincent .

Furthermore, the following cities, areas and places were named after her:

The bird of paradise flowers also bear their name - the Strelitzia . They were given this name while Queen Charlotte was still alive, in 1773, from their first describer William Aiton , the director of the Botanical Garden in Kew near London.