The city ​​fortifications of Hameln were a system of defenses for the city of Hameln that protected it from attacks from around the 13th century to the beginning of the 19th century. This included the medieval city ​​wall with wall towers and city ​​gates as well as the Hamelin Landwehr built in the 14th century as an outer protective ring . Expanded into a bastionary fortress based on the Dutch model in the 17th century , Hameln became the state fortress of the Electorate of Hanover . Together with the Klüt Fortress , which was built in the second half of the 18th century , the Hameln Fortress reached its highest level of expansion and was considered the " Gibraltar of the North". On Napoleon's instructions, the fortifications were razed so thoroughly in 1808 that today there are hardly any stone remains. 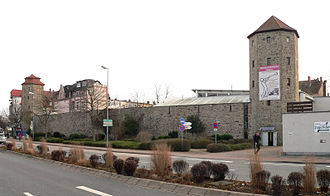 Probably in the 13th century a city wall about 9 meters high was built around Hameln, with a ditch in front of it (around 1250). The only remnant of the wall today is an outer wall on the Huguenot house in the southern area of ​​the old town . There were five city gates at the exits to long-distance paths. These were the Ostertor, first mentioned in 1272, the Mühlentor mentioned in 1282, the Wettor from 1327, the Thietor from 1340 and the Brückertor from 1355. 22 wall towers were built along the wall, each about 100 to 120 meters apart. The first tower was mentioned in 1333. Today only the Haspelmath Tower, built around 1450, and the Powder Tower remain. Between the two towers, a section of the city wall was not built true to the original in the 1990s.

Transition to the fortress

The adaptation of the city fortifications to the latest military technical conditions began in Hameln probably in the middle of the 15th century when a wall was built up in front of the city wall. Responsible for this were the emergence of firearms in the 14th century and the further development of artillery in the 15th century, the penetration of which city walls were no longer able to cope. Around 1530, Duke Erich I expanded the city wall. In addition, the city wall on the Weser received two rondels , which served as platforms for setting up guns. Ravelins were also built as acute-angled earthworks with guard houses and cannons in the widened city moat at three city gates . In the 17th century, the fortifications in Hameln expanded further in advance. The trench was filled in directly at the city wall and a 60 to 90 meter wide trench was dug in front of the wall. 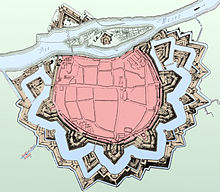 After Hamelin to the end of the Thirty Years' War had lost its independence, it was due to its strategic location on a Weser transition and the Hellweg , under landesherrschaftlicher line to the modern country fortress expanded. The strength of the fortification was then no longer based solely on the city wall, but on polygonal earth walls and a wide moat extending far into the foreshore of the city. The bastionary renovation based on the Dutch model began in 1664 under Duke Georg Wilhelm . The two existing roundels were redesigned into bastions . In total there were the following eight bastions, which protruded at an acute angle into the up to 90 meters wide moat and were named with the names of princes and princes of the Guelphs :

In front of three city gates, ravelins equipped with guard houses and cannons secured access to the city via drawbridges. The moat was followed by the lower outer wall designed as a glacis , which the Hamel was in front of. The narrow body of water, also known as the fortress hamel, encircled all of Hameln along the outer wall and flowed into the Weser in two places. Today the course of the Hamel with its acute-angled corners shows the locations of the earlier fortifications. With the two weirs on the Weser secured by bastions , the wide moat around Hameln and the Hamel could be dammed to a depth of around two meters. There was a ski jumping hill on the Weser island, which was pronounced Werder and over which the bridge over the Weser ran . The bridge was secured on the other bank of the Weser by a ravelin as a fortified bridgehead . 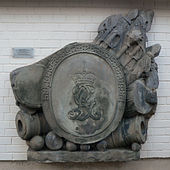 Coronation of the outer gate at the bridgehead - Ravelin with the initials G R for King George III. ( Rex ), displayed in the Hameln Museum

A first stage of expansion with newly created bastions, earth walls, curtains , lunettes and ravelins was completed in 1670. Then two barracks for the soldiers of the fortress and bulletproof casemates were built in the city . In addition to several smaller buildings, the three largest casemates each accommodated up to 150 men and were up to 100 meters long. In the event of a siege, there was a casemated bakery that could bake 1000 loaves a day. Three of the medieval city wall towers were initially used to store powder, from which the name of the powder tower that still exists today is derived. At the request of the city and monastery in 1733, the powder was stored in the fortifications outside the city.

When the state fortress was established at the end of the 17th century, the soldiers of the garrison , which had the strength of a battalion , were initially housed in citizens' quarters . As the billeting was a burden for the citizens and there were also disputes, the construction of barracks soon began. These were three two-story timber-framed buildings called barracks . As a result, the population was largely exempt from housing in 1701, even though 184 citizens still gave accommodation in 1761. Other military facilities in the city were a powder mill , private houses rented as armories , a laboratory for fireworks , the war chancellery, the main guard, the commandant's office , the garrison church and the Hameln garrison cemetery .

In 1758 a flood sluice was built, protected by a redoubt , which was supposed to dam the water of the Hamel during a siege and flood the lowlands around the city. During the Seven Years War , artificial floods occurred in three cases for defense purposes. During the siege of Hameln in 1806, due to the prevailing drought, a flood was unsuccessful because the cavalry was able to cross it.

The regional fortress of Hameln , which was built in the 17th century, was headed by the following commanders , who were appointed governors from 1700 :

Memorial stone for 9 French casualties in an explosion on February 7, 1808 during the razing

In November 1806, during the Fourth Coalition War , French troops moved in front of the Hameln Fortress, where at that time Prussian troops with a strength of around 9,000 soldiers had gathered. Under the impression of the defeat in the battle of Jena and Auerstedt , the Prussian troops in Hameln surrendered on November 20, 1806 under General Le Coq almost without a fight, despite the numerically inferior French of General Savary with about 6000 men. In addition, there was a riot among the Prussian soldiers, who were drunk, looting and shooting through the streets of the city when they learned that the officers were to be escorted and that, according to the surrender conditions, they were to be taken prisoner to France. An eyewitness to the incidents was the scholar Adelbert von Chamisso , who had been an officer in the fortress and was released as a prisoner on his word of honor . The surrender was signed in the Wehrberger Warte , a former control room of the Hamelin Landwehr . The agreement was signed by the French General Savary and the 76-year-old Prussian officer of Schoelerpark which it to life imprisonment was condemned.

In 1808, the fortress of Hameln, including the fortifications on the Klüt, was razed by Napoleon on the basis of a decree . The surface stone material was completely removed by around 1,000 workers, other sources speak of up to 4,000 workers, using 26,000 horses and over 6,000 wagons. A hospital was set up for the sick workers. Even so, with 50 workers dead, the mortality rate was substantial. While defusing a mine in a casemate in February 1808, the explosive charge exploded, killing nine French soldiers. The razing lasted half a year and cost almost 2 million francs . In 1812, King Jerome, on behalf of the Kingdom of Westphalia , donated the once expropriated and now vacant fortress grounds to the city of Hameln for reuse. Therefore, up to the settlement in 1850, a lengthy legal dispute arose with the Hanoverian War Ministry, which did not recognize the donation during the French occupation. The city then sold the land to private individuals or built roads on them.

Lüdersteich as the last remnant of the wide fortress moat

In the course of construction and road construction work as well as excavations in the city center of Hameln, the remains of fortress buildings were often found. In 1943 a basement of the fortress with a one meter thick barrel vault was discovered during excavations. In 1973, an underground postern of the fortress was exposed during road works . During the construction of an underground vault for a banking institute in the building of the former garrison church in 1988, a brick burial chamber with remains of bones was found. In 2001 a barrel-vaulted corridor four meters high and two meters wide was discovered, which began in a cellar of the Redenhof . During the Second World War , the vault made of a meter-thick layer of quarry stone was used as an air raid shelter. Remnants of the walls of the fortress were occasionally found in the ground of houses being built. The only remnant of the wide moat is a pond, which is named Lüdersteich after the previous owner of the property. In 1856, the merchant Carl Ludwig Lüder was one of the first citizens to purchase a plot of land on the vacated fortress site.