Therwil ( Basel German : Därwyl ) is a municipality in the Arlesheim district of the canton of Basel-Landschaft in Switzerland . 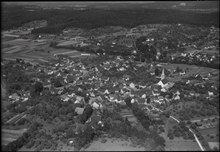 Therwil is located in Leimental on the western flank of the Bruderholz and is connected to the city of Basel by tram line 10 of Baselland Transport AG (BLT). Its neighboring communities are Aesch , Reinach , Oberwil , Biel-Benken , Witterswil and Ettingen . The area of ​​the municipality is 763 hectares, of which 50% is agricultural area, 26% is forest and 24% is settlements.

Therwil was settled very early on, as numerous testimonies from the Stone Age , Roman and early medieval times were found, such as a burial ground and a pottery furnace. Therwil was first mentioned in 1223 as Terwilre, which was transferred from the Counts of Thierstein to the Reichenau monastery. In 1518 the Bishop of Basel acquired the village and in 1525 it was incorporated into the castle law of the city of Basel. During the Thirty Years War the village was plundered several times and after the French Revolution Therwil became part of the Raurachian Republic. From 1792 to 1815 it was under French rule and was added to the canton of Basel at the Congress of Vienna . 1887, after the opening of the Birsigtalbahn, the village had a direct connection with the city of Basel . Common genders in Therwil are Gutzwiller, Heinis and Gschwind. A well-known resident was the revolutionary Stephan Gutzwiller , the head of the revolt that led to the separation of the Basel cantons and the founding of the canton of Basel-Landschaft. 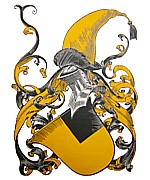 Coat of arms of those of Terwil

Yellow shield with a black square in the upper right corner, which is the coat of arms of the "von Terwilr" family.

Therwil's baseball club, the Therwil Flyers , is an eleven-time Swiss champion. The HC Therwil handball club, together with the partner clubs from Oberwil and Binningen, is one of the largest clubs in north-western Switzerland. The interregional teams are listed under the label HSG Leimental . In the past year various great successes could be celebrated. There is also the VB Therwil volleyball club, which is one of the largest volleyball clubs in the Basel region. There is also FC Therwil . The 1st team has been playing interregional in the 2nd league for the first time since 2011. There is also the Therwil women's football club, in which the first team in National League B plays. The fourth big sports club in the league is the Athletics Club Therwil , which has already been able to assert itself several times with its athletes at the Swiss championships. Other sports clubs are the Badminton Club Therwil, the Feldschützengesellschaft Therwil, the Wrestling Club Therwil, the Chess Club Therwil, the tennis clubs TC Birsmatt and TC Leimental and the Gymnastics Club Therwil.

In addition to the sports clubs, Therwil also has many other clubs. For boys there is the Jungwacht St. Stephan Therwil and for girls there is the Blauring Therwil, both youth organizations with a long tradition in the village. The Jungwacht St. Stephan Therwil is the second oldest group in Switzerland and the blue ring (at that time still under the name Imeldaverein) was one of the first Swiss youth organizations in this style.

Political communities in the Arlesheim district