The Saloppe is a former waterworks in Dresden . It went online in 1875 and was the first Dresden drinking water plant. It was sold in October 2013, and work began on converting it into luxury apartments in 2014.

View of the waterworks from the west, in the foreground the Eisenbornbach

The Saloppe waterworks is located directly on the right bank of the Elbe in the Loschwitz district on the Dresden Elbe slope, which is slowly tapering off here . It is located in the acute angle between Brockhausstrasse and Körnerweg below Albrechtsberg Castle and is already included in the statistical district of Radeberger Vorstadt and thus in the district of Neustadt . Immediately below the waterworks, the Eisenbornbach coming from the Dresdner Heide , which leaves the narrow Schotengrund here, flows through the opening in the wall from the Brockhausgarten and is piped underground to its confluence with the Elbe. The Waldschlößchenbrücke is about 800 meters downstream . The waterworks is a technical monument and lies within the area that was protected as a World Heritage Site in Dresden Elbe Valley .

The name Saloppe is derived from chalupka . In High German it means something like "hut" or "Bude" and since the time of the wars of liberation it has been the name of the Russian soldiers who were present in the area at that time for a simple tavern in the vicinity of today's waterworks. Since the German-speaking population did not correctly understand this name, it was falsified over the years by sloops to give it its current form and finally transferred from the bar to the waterworks on the Saloppe . 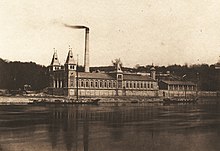 During the Seven Years' War , Prussian soldiers erected a field post in a simple board construction, which was located on a vineyard northeast of Dresden's old town near a ferry station. After the Prussian army withdrew , it was left to the ferryman and his wife, who had previously acted as sutlers and from then on operated a public bar. Around 1813, during the Battle of Dresden, there was a Cossack field post in the building, which was known to the Russians at that time under the name Wutki Chalupka (German Schnapsbude ), from which the current name Saloppe developed. After the shack was demolished in April 1822, a new building was built on the same site, which was a popular inn, but was removed after the city of Dresden had acquired the property in 1864 to build the waterworks on it.

After the completion of the waterworks, its builder Theodor Friedrich built a new neo-Romanesque replacement building for the pub. From 1876 a spacious restaurant complex with a lookout tower and garden terrace was built. It developed into one of the most popular and largest restaurants in Dresden and from 1930 belonged to DREWAG. It was destroyed in 1945. In the post-war period, a small residential area restaurant was operated here in a temporary building. Today the Saloppe is considered the oldest beer garden in Dresden and became known as a venue for afterwork parties, soap box races, children's parties and concerts in the post-reunification period. The Saloppe excursion destination, however, threatened to end: In 2007 the finance committee of the City of Dresden decided to sell a 11,900 m² part of the property. The investors wanted to build private domiciles on this site next to Albrechtsberg Castle. In the meantime, resistance arose from the population of Dresden and from the operators of the pub. After the then Mayor of Dresden, Helma Orosz, advocated this in 2009, the Dresden City Council unanimously decided on March 12, 2009 to preserve the Saloppe and thus spoke out against the privatization of the property.

Before the Saloppe waterworks were built, the Neustadt or the former Altendresden was supplied with water from the Dresdner Heide. First of all, Augustinian monks set up the wooden Fischmannsteichleitung to supply their monastery in 1476, which branched off water from the Eisenbornbach in the Schotengrund above the Fischhaus at the upper Fischmannsteiche and led to Altendresden. After 1545 a second line was laid, which supplied the Neustädter barracks of the Saxon army and the Dresden citizens half . Later, due to the increased demand, the capacity was doubled again. Up until the 19th century, 500 cubic meters of water flowed into the city from the heather in this way every day. After the construction of the Saloppe waterworks, the pipeline lost its importance, but was still in operation as a service water pipeline until it was destroyed in 1945. Other parts of the city were supplied by many other wells, springs and pipes, for example with water from the Weißeritz or Kaitzbach . Due to the enormous population growth during the industrialization period and the constant risk of epidemics, a central drinking water plant was planned.

Construction of the waterworks

Memorial plaque to Bernhard Salbach and high water mark for August 17, 2002 at a height of over three meters on the facade of the waterworks

On September 26, 1871, the construction of the “waterworks on the Saloppe” began. The design for the neo-Romanesque building comes from the then Dresden city planner Theodor Friedrich , who with the gas works in Reick also created the basis for supplying the city with another important medium. The plans for the technical equipment of the waterworks contributed the engineer Bernhard Salbach (1833-1894), who later also equipped the Tolkewitz waterworks . On the facade of the clinker building there are three memorial plaques, one of which each commemorates the start of construction in 1871, the engineer Salbach and a renovation from 1923 to 1925. The total cost of the construction amounted to 7.75 million marks . On March 30, 1875, the Saloppe was inaugurated as Dresden's first waterworks. Commissioning took place a little later, so that 1875 is seen as the beginning of modern public water supply in Dresden.

Right from the start, the plant extracted water from the bank filtrate of the Elbe. This groundwater , which shortly before was surface water , was collected via a 1,438 meter long seepage gallery with cast iron seepage pipes and later via 57 pipe wells , some of which can still be seen on the Elbe meadows and in the Dresdner Heide. The water was then treated in the factory and, with the help of steam engines, pumped into the main reservoir, 60 meters higher, in the elevated tank at the Fischhaus in the Dresdner Heide. As early as 1894 to 1896, the Tolkewitz waterworks was built on the other side of the Elbe , as the Saloppe could no longer guarantee the supply of the rapidly growing city on its own, which emerged from an expert report by Bernhard Salbach in 1891. From then on, the Saloppe was only responsible for the Neustadt side of the Elbe. Over 4,000 cubic meters of drinking water were produced daily in the Saloppe, so that even in the hot summers of 1892 and 1904, no consumption restrictions were necessary. In 1902, the Albertstadt barracks became self-sufficient when their own factory was completed. The municipality of Trachau , north-west of Dresden, built the Trachau waterworks in 1899 and 1900 , which soon proved uneconomical after being incorporated into Dresden and was closed again in 1909.

Memorial plaque for the reconstruction of the waterworks on its facade

The expenditures for the production of drinking water from Elbe water had to be increased in view of the steadily increasing pollution of the river. In the years 1923 to 1925, a technical modernization took place in the form of the conversion of the pumping system from steam engine drive to electrical operation as well as the installation of filters . The waterworks were partially destroyed in the Allied bombing raids on February 13, 1945 . The entire eastern part of the building, the coal shed, the two spiers on the western side of the building and the chimney were lost, the rest was left badly damaged. After being used as a storage facility in the meantime, the waterworks was poorly restored in 1949 and resumed operations. It was reconstructed in 1980. Since the remote drinking water supply from the Weißeritz reservoirs in the Eastern Ore Mountains had now been expanded and the water quality of the Elbe had deteriorated, the Saloppe drinking water plant went offline in 1993, only to be put back into operation two years later than today's industrial water plant.

The conversion of the listed machine house into luxury apartments, which was planned around 2000, was initially rejected due to the flooding of the Elbe in 2002 and various other concerns. In October 2013, Drewag sold the listed waterworks. The investor would like to build luxury condominiums next to the Saloppe pub.