The agave plants (Agavoideae) are a subfamily in the family of the asparagus plants (Asparagaceae) within the order of the asparagus-like (Asparagales). Some species are grown as ornamental plants in parks, gardens and rooms. A further use by humans is known of a few species: pulque is made from the juice of some agave types and the fibers of some agave and yucca types are processed.

There are perennial or perennial plants , there are herbaceous to shrub-like or even tree-like growing species; they form rhizomes . Few species are epiphytes . Many species are evergreen. Many species are succulents , so they can hold water. Agave and yucca are CAM plants . The shoot axes often do not reach above the surface of the soil, but in some species simple or branched stems form over many years. The leaves are alternate and spiral and usually arranged in a rosette. The leaves are always simple and have parallel nerves (never network nerves). In many species the leaves are reinforced at the edge. The stomata are anomocytic. 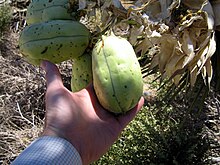 They often only bloom in old age, with some species dying off after the seeds have formed, i.e. they are monocarp ( Hapaxanthe plants ), but most species are polycarp. Often the simple or branched, racemose inflorescences are profuse. There are two or more bracts present, but they never completely enclose the inflorescence (differentiation of the Asparagaceae from other families of the order). The threefold flowers are mostly hermaphroditic, or more rarely functionally unisexual. There are two circles with more or less identical bloom cladding sheets; they are often free, but can also be fused to form a tube. There are two circles with three fertile stamens each, which may or may not protrude beyond the flower envelope. The three carpels are fused. The nectar secretion takes place in septal nectaries.

They usually form capsule fruits , some types of yucca form berries . The seeds are mostly flat and contain no starch. The endosperm is helobic and contains oil.

Saponins have been found in many taxa . 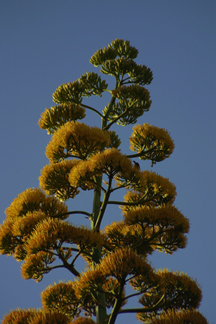 Detail from an inflorescence of an agave ( Agave spec.) 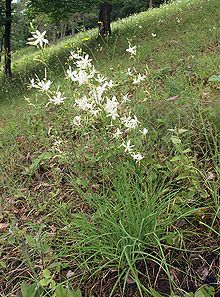 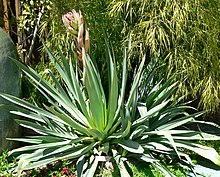 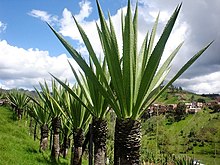 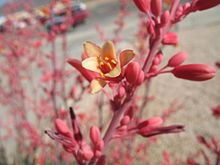 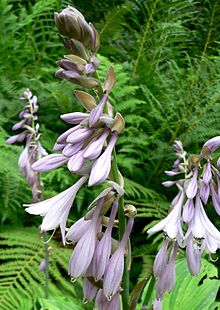 This subfamily was set up in 1837 by William Herbert as "Agaveae". The type genus is Agave L.

Molecular genetic studies in the 21st century have resulted in the family boundaries within the order of the Asparagales having shifted significantly. So the agave plants are only a subfamily (Agavoideae) in the family of the asparagus plants (Asparagaceae). Previously it was an independent family Agavaceae. The genera were earlier also in the Liliaceae Juss. incorporated. The Agavaceae family was first described as Agavineae in 1829 by Barthélemy Charles Joseph Dumortier in Analyze des Familles de Plantes 57, 58.

Genera and their distribution

The subfamily of the Agavoideae has an almost worldwide distribution. The focus of biodiversity is in the Neotropic . The natural areas of many extend from the south of the USA , through Central America , to northern South America and Asia. Some species each occur, for example, in Malesia , northern Australia and New Zealand and on the Caribbean islands . There are also taxa in tropical to subtropical areas of other parts of the world and some taxa are also found in the Holarctic . For example, some American species made their way into southern Europe and other parts of the world through humans . Most species do not tolerate frost.

The scope of some genres has been greatly changed by revisions in the 21st century. There are about 18 genera (as of 2009) with over 600 species in the subfamily of the agave family (Agavoideae):