The Sohn-Rethel family, photo by Constantin Luck , around 1900

Alfred Sohn-Rethel came from an upper-class family of painters . He was the eldest son of the painter Karl Rudolf Sohn and his wife Else Sohn-Rethel , the daughter of the painter Alfred Rethel . His grandfathers were the painters Karl Ferdinand Sohn on his father's side and Alfred Rethel on his mother's side, after whom he received his first name posthumously and whose wife Marie was a daughter of the miniature painter August Grahl . His siblings were Otto Sohn-Rethel , Karli Sohn-Rethel and Mira Sohn-Rethel (1884–1974), who in 1907 became the wife of Werner Heuser . With his wife Anna Julie, née Michels, he had three children: Anna Clara Marie Elisabeth, called Lissi (1897–1993), Alfred Carl Eduard (1899–1990) and Hans-Joachim (1905–1955).

Inspired by his father, Alfred painted from nature at a very early age, practiced watercolor painting and drawings of animals from the zoological garden, and portrayed the members of his family of painters. He attended the Realgymnasium under the direction of the director Adolf Matthias on Klosterstrasse, today's Humboldt-Gymnasium Düsseldorf . His academic performance left a lot to be desired and learning was difficult. He and his friend Ernst Lueg (1874–1952), the son of Heinrich Lueg , received tutoring from Dr. Lindemann, who was employed at the Haniel & Lueg plants. Because of his artistic talents, his father thought it necessary to entrust him to the drawing teacher Hugo Zieger , who gave lessons twice a week.

At the age of 13, Alfred passed the entrance exam at the Düsseldorf Art Academy on the basis of a portfolio and was accepted as a student on May 15, 1888. Initially he studied in the plaster class, followed by the evening act with Eduard Gebhardt , from 1889 in the middle class of Hugo Crola and Adolf Schill and finally in early 1892 in the master class of Johann Peter Theodor Janssen .

At the academy, Alfred made friends with an older student, the painter Lewis Edward Herzog (1868–1943). For a long time you had planned to leave the academy to study painting in Italy . This was implemented in autumn 1892 and immediately after Christmas we went to Venice . The stay in Venice was interrupted by an earthquake that destroyed the neighborhood in which they lived. It was the effects of the earthquake centered in Zakynthos on January 31, 1893, which could be felt up the Adriatic coast to Venice. Alfred moved to a small place on Lake Garda where he could live cheaply. Many works with rural scenes date from this time. 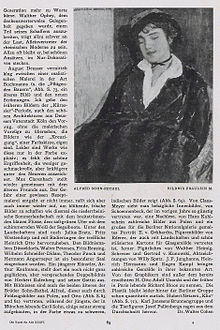 His family spent the summer of 1893 in Gossensaß , and since he was on Lake Garda, he joined them. He met his future wife Anna Julie Michels at the Grandhotel Gröbner. Her parents were Eduard Michels, owner of a carpet weaving workshop for Smyrna carpets in Hannover-Linden , and Elisabeth, née Oppenheimer , daughter of the banker Albert Oppenheimer . In 1893 he went back to Venice and continued his painting studies and stayed in lively correspondence with Anna. Back in Germany, Alfred Sohn-Rethel married Anna Julie Michels (1871–1957) on October 8, 1896, in Hanover.

At the beginning of 1897 he moved to Paris . Here he developed his sensitive sense of color and the painterly treatment of image content and broke away from the Düsseldorf tradition of genre painting . He continued to paint still lifes , figures, landscapes and animals. A studio was always available to him for his stays in Düsseldorf . His mother Else, daughter of Alfred Rethel and granddaughter of August Grahl , had set up this for him and his brothers Otto and Karli in the family house on Goltsteinstrasse 23, on the upper floor. The house was destroyed by an incendiary bomb along with all the works of art it had collected during World War II.

On December 8, 1897, his daughter Elisabeth, called Lissi, was born in Hanover, who later became the second wife of Albert Steinrück (1872–1929). In Neuilly-sur-Seine near Paris, the eldest son Alfred Carl Eduard was born on January 4, 1899. From 1908 to 1912 he was cared for by Ernst Poensgen , a Düsseldorf steel industrialist friend of his , so that he would not also become a painter would be. Hans-Joachim , his youngest, also called Dotz , was born on November 15, 1905 in Düsseldorf.

In Paris, Sohn-Rethel made studies of impressions in full pictures and numerous sketches. These were published in 1900 by the author Walther Gensel (1870-1910) with the title Paris - Studies and Impressions at Dietrich, Leipzig . In 1903 he lived at 23 Rue des Fossés-Saint-Jacques, Paris . He moved to Barbizon , where he sought direct access to nature and painted landscapes. Alfred Sohn-Rethel took part in the Salon de la Société des artistes français exhibition at the Grand Palais from April 16 to June 30, 1903 with two pictures from the Barbizon School - Sous bois and La fille du paysan .

In 1909, Alfred Sohn-Rethel joined forces with the Düsseldorf painters Julius Bretz , Max Clarenbach , August Deusser , Walter Ophey , Wilhelm Schmurr and his brothers Otto Sohn-Rethel and Karli Sohn-Rethel and founded the Sonderbund group . It referred to the first special exhibition held from May 10th to May 31st, 1908 in the Düsseldorf Kunsthalle . Close contacts to the gallery owner Alfred Flechtheim were maintained; later this group broke up. Membership in the German Association of Artists was compulsory for Alfred Sohn-Rethel, as this went beyond the previously existing Secession.

In the Art Journal in 1909, in the article The art for all his works were discussed.

“... The studies of Alfred Sohn-Rethel, who z. Currently lives in Paris, but is still attached to Düsseldorf. His broad and brisk sketches from Parisian life, which he published together with W. Gensel in the pretty book Paris , show a bold and realistic critic of the surface of modern life. Here, however, there are also careful individual studies, so that one must also have respect for solid ability. A red chalk drawing, portrait of Henri Héran, a dreamy, delicate girl's head, the portrait of his graceful little sister, and above all a sheet of paper with all sorts of fresh studies of a fat, naked, happy baby. A great deal of skill lies in the bud here. "

In 1912 he moved from Paris to Wilmersdorf near Berlin and later to Berlin-Charlottenburg . Here he took on the influences of salon painting and expressionism. In May 1912 Alfred Sohn-Rethel participated in the Sonderbund exhibition in Cologne with the pictures Self-Portrait , Still Life with Japanese Doll and Still Life of Flowers ; 1913 with two works (Paris, no. 499–500).

“… That was how Alfred Sohn-Rethel, Hermann von der Dunk, Helmuth Macke , and Fritz Schaefler all hung together in the Cologne Art Association . They were all honest people. Sohn-Rethel, who was saturated with painting culture, worked portraits that not only looked decent but also elegant ... "

The genre pictures, which were characterized by a clear structure and an exact reproduction of the details, now belonged to his earlier works.

During the First World War , in early 1916, he was employed as a war painter on the Eastern Front in Poland and Belarus . As an artist he had to find “painterly effective and interesting motifs from the life of the war”. He drew landscapes, villages, treks and trains of soldiers. 1918 was the year of his participation as a member of the Free Association of Düsseldorf Artists in the Great Berlin Art Exhibition in the Kunstpalast in Düsseldorf. Some of his campaign pictures were also shown.

In the report of the “Reichswirtschaftsmuseum Volk und Arbeit”, Alfred Sohn-Rethel, as a participant in an exhibition in the Kunsthalle Düsseldorf in June / July 1934, was titled “Professor”. He had received the title from the Grand Duke of Hesse in 1910 while he was living in Barbizon.

When the NSDAP came to power , the synchronization and the takeover of the cultural institutions began. Alfred Sohn-Rethel's children were “first-degree Jewish mixed race ” and exposed to increasing pressure to be persecuted. He himself had been a member of the Reich Chamber of Fine Arts since January 1934 , residing at Kurfürstendamm No. 69, and was able to continue his profession. In 1936 his son Alfred emigrated to Lucerne , Switzerland . His wife Tilla Henninger (1893–1945) and his daughter Brigit (1921–1995) had been sent ahead by him in 1935. Sohn-Rethel divorced his Jewish wife in October 1937, but kept in touch with her, which led to his resignation from the Bund Deutscher Maler und Graphiker e. V. in Berlin was removed.

His daughter Lissi, Albert Steinrück's widow since 1929 , then resident in the Berlin artists' colony on Laubenheimer Str. 1, her two daughters and Alfred's wife Anna Julie were protected from persecution with the help of Heinrich George , as well as financially supported. His son Hans-Joachim Sohn-Rethel left Berlin and joined the cabaret in exile , went to England via Switzerland in 1934 and finally emigrated to the USA in 1939.

In May 1946, after the Second World War, she remarried to Anna Julie Michels.

At the age of seventy-five, from 1950 to 1955, Alfred Sohn-Rethel still taught painting and drawing in Sigmaringen , where he lived not far from the Hedingen monastery .

In April 1956 he was accepted into the Luise Poloni home run by the Carlo Steeb sisters in Lustnau Tübingen , where he died of old age on December 10, 1958 . His wife Anna had died a year earlier, on September 7, 1957.