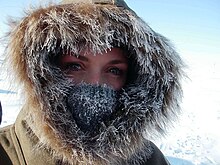 Amanda Tapping (born August 28, 1965 in Rochford , Essex ) is a Canadian actress , producer and director of British origin and is best known for her roles in Stargate - Kommando SG-1 and Sanctuary - Guardians of the Creatures .

Tapping moved to Toronto with her family when she was three . Contrary to the wishes of her parents - who had planned a scientific career for her - she decided to become an actress at the end of her high school years. After attending the Windsor School of Dramatic Art for four years , she took on guest roles in the television series The X-Files and Ein Mountie in Chicago, among others . From 1997 to 2007 she played the role of Dr. Samantha Carter in the television series Stargate - Kommando SG-1 and from 2007 the same character in the Stargate Atlantis offshoot . From 2008 to 2011 she played the role of Dr. in the series Sanctuary - Guardians of the Creatures - which she also produced. Helen Magnus . In 2004 she made her directorial debut and directed an episode of Stargate - Kommando SG-1 . Since 2009 she has worked regularly as a director for various television series. Since 2017 she has mainly directed.

Tapping has been married to Alan Kovacs since 1994 and adopted his last name. Her real name has been Amanda Kovacs since then . She continues to use her maiden name as a stage name. In 2005 she gave birth to a daughter.