The Nymburk – Děčín (also: Elbetalbahn ) railway is a double-track, electrified main line ("celostátní dráha") in the Czech Republic , which was originally built and operated by the kk priv. Österreichische Nordwestbahn as part of its supplementary network. It runs in the Elbe valley from Nymburk (Nimburg) via Lysá nad Labem (Lissa / Elbe) , Mělník , Litoměřice (Leitmeritz) and Ústí nad Labem-Střekov (Aussig-Schreckenstein) to Děčín (Tetschen) .

Even during the time of the monarchy, the route was the shortest connection between Vienna and Central Germany. Today, the route mainly takes on transit goods traffic between Scandinavia and Southeast Europe. In contrast, travel is of minor importance. 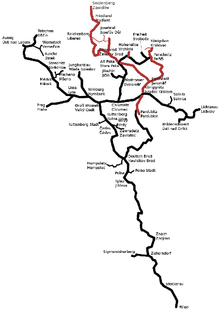 Various German business circles were planning a direct connection from Berlin to Vienna via Reichenberg at the end of the 1860s . Austria also wanted a short connection from Vienna to the ports of the Baltic Sea and North Sea , which should also open up Central Bohemia (coal mines and sugar factories). At that time, this was possible with several waybills from different railway companies, whereby one wanted to be independent of the StEG .

As early as 1865, the South-North German Connection Railway (SNDVB) carried out various preparatory work for this project, but had several competitors, especially the StEG. In 1867 the SNDVB merged with a few other applicants and on September 8, 1868 received the concession to build and operate the Vienna – Jungbunzlau route and several wing runways.

On July 26th, 1870 the kk priv. Oesterreichische Nordwestbahn (ÖNWB) was founded to create a second north-south connection in Bohemia. In 1874, the Vienna – Mittelgrund line, the main line of the Austrian Northwest Railway, was completed. There were also branch lines to Jungbunzlau , Aussig and Prague . At the northern end of the line, the ÖNWB built its own Elbe port in 1880, which was connected with a tugboat .

After the nationalization of the ÖNWB, the line was transferred to the kk Österreichische Staatsbahnen kkStB on January 1, 1908 . After the First World War, the newly founded Czechoslovak State Railways ČSD took their place .

After the Sudetenland was annexed to Germany in autumn 1938, the line between Liboch and Mittelgrund came to the Deutsche Reichsbahn , Reichsbahndirektion Dresden . The connection was now contained in the Reich curriculum as KBS 162g Tetschen – Liboch – Lissa. Thus the line was in fact graduated to a branch line. End-to-end express trains no longer ran.

After the end of the Second World War , the route was completely returned to the ČSD. Because of the changed traffic flows - the connection to Dresden initially no longer played a major traffic role - all passenger trains to Děčín hl.n. (formerly Bodenbach) tied through. The old north-west station has only been used for freight traffic since then.

In the 1950s, the line was expanded to two tracks and electrified as part of the main Czechoslovak traffic axis Košice - Chomutov . The only exception was the short section between Děčín východ and Děčín-Prostřední Žleb, where electrification did not take place until 1987.

The following table shows the opening dates of the electric train operation:

In a conception by the Czech government for rail freight transport that will run until 2030, a fundamental modernization and renewal of the line is planned for the years 2018 to 2025. In this context, the contact line voltage is also to be converted to alternating current of 25 kV 50 Hz. In the second half of 2020, the construction of the contact line system between Ústí nad Labem-Střekov and Velké Březno, built in 1961, is planned for a budget of 130 million crowns. In addition to a total of 16 kilometers of contact wire, 276 contact line masts and 950 insulators will be replaced. 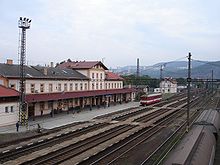 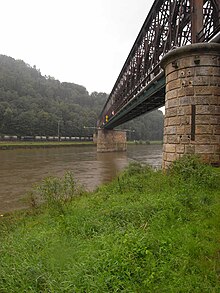 (Status: 01/2008) In the first few decades there were two pairs of non-stop express trains between Vienna and Tetschen, which continued to run even after Czechoslovakia was founded in 1918. The 1918 timetable also indicated three pairs of passenger trains. There were no through trains to Dresden before the Second World War. In Tetschen always had to take the Tetschen – Dresden trains of the Kgl. Saxon State Railways (or later the Deutsche Reichsbahn ).

Until the beginning of the 1990s, international long-distance trains, such as the night train “Saxonia” between Dresden and Balatonfüred, still ran on the route . The last higher quality train pair was an express train between Děčín and Jihlava, which was discontinued in 2007.

Today the connection can be found in three different course book tables:

The Kolín – Ústí nad Labem západ route is served by an express train service that runs every two hours. There is no longer any long-distance traffic between Ústí nad Labem-Střekov and Děčín.