Shop for levitated water in Kassel

Revitalized water , also known as levitated , vitalized , informed , structured or Grander water , is water that, according to the claims of its manufacturers and marketers, has been treated in various ways and has thus been "improved" for a number of purposes. There are no indications of actual changes in the water.

In Switzerland it has been forbidden since 1999 to advertise the therapeutic effects of water. In Austria, Grander water (named after Johann Grander ) can, according to a court ruling from 2006, be described as “ parascientific nonsense coming from the esoteric milieu ”.

Many measures for the alleged revitalization of water are linked to the Austrian para-scientist Johann Grander, who claims to have developed his own methods and devices. In the following, “Grander water” is discussed as an example, but the scientific refutations can also be applied to similar concepts.

The following developments are seen in context by representatives of the theory:

So-called water revitalization according to Grander

A bottle of Grander water

A company founded by the North Tyrolean entrepreneur Johann Grander , who died in 2012, offers water that flows past a metal cylinder (mostly made of copper) filled with so-called "information water". This is intended to change its "structure" and give it special properties that are not described in detail. Allegedly, a glass of Grander water is supposed to be able to change the water in a glass standing next to it in such a way that it has the properties of Grander water.

Grander claims to have received the instructions for the development of Grander water from God: ... who traces the creation of Grander water back to his good connections to God, gets answers to his questions “from above” and claims to be a different person since Jesus Christ appeared to him 30 years ago .

Grander and the commercial representatives of its products also promise a number of pseudoscientific physical and biological effects that water treated in this way allegedly has. For example, positive effects on nutrition , grain cultivation and health are promised. However, to date there are no scientific studies and no empirical evidence that provide evidence or suggest that water treated in this way has the claimed effect.

The Grander company's communication policy is characterized by the fact that the advertised effects are never mentioned directly, but only indirectly through selected customer feedback, so-called testimonials . Examples of these customer references can be seen across multiple industries.

In 2010, the Grander company made an annual turnover of around 16 million Swiss francs, around 12.7 million euros, with the sale of water revitalization devices and utensils in connection with Grander water.

Alleged effects and their evaluation

None of the effects claimed by Grander or by Grander customers could be proven reproducibly . Individual pre-scientific and scientific papers are presented on the Grander website: a diploma thesis, a dissertation and a study.

The following statements have been scientifically refuted:

No direct studies are known for the following statements:

On October 31, 2019, the Grander company spread the message via its own website and a PR page in the Kitzbüheler Anzeiger that the effectiveness of the Grander water had now been scientifically proven, and corresponding tests could be reproduced. The Wetsus research group “applied water physics” verified the basic mechanisms of magnetic water treatment using an IPF / Grander water core magnetic cylinder and was able to publish them in a peer-reviewed journal . A serious evaluation of this study from a third, academic side is still pending. A first technical analysis by the physicist Florian Aigner turned out negative: The published article has no relation to the claims made by the company about "water revitalization". In December 2019, the company was awarded the negative Golden Board in front of the head for its "life's work" . 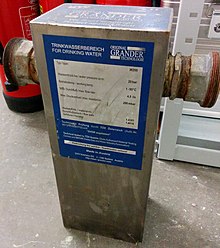 Water molecules are dipole molecules and are not free and independent of each other in liquid water, but are networked via hydrogen bonds . This also creates larger short-lived units, so-called " water clusters ".

From the bustling water manufacturers say that the information , be changed by the cluster "restructured" for example, water vortex would. What exactly this change should consist of and which structures would trigger what are not defined by the manufacturers or declared as "not known".

However, hydrogen bonds only exist for a very short time and break up again within picoseconds , while new bridges and thus new clusters form just as quickly at other binding sites. Experimentally, the extreme transience of the microstructures is also at the water rotational diffusion of the water to recognize (the random by random movements generated change the direction of the axes of symmetry of the water molecules in the liquid whose characteristic times also lying in the picosecond range). These special properties of water are the reason for its numerous anomalies.

A permanent restructuring of the clusters is impossible because of the short life of each individual hydrogen bond.

Some companies also offer "energization" or "revitalization" of the snow with specially treated water for snow cannons . The German company Aqua Blue is promoting "Snow tuning for snow cannons and pumping stations". The company Energy Receive Solutions (ERSO) offers a process that is supposed to adjust the structure of artificial snow to that of natural snow by means of "electrosmog suppression and water activation". From a scientific point of view, these claims are unsubstantiated; they are contradicted with the same arguments as for "water revitalization".