This article deals with the bikini garment; for the South Sea atoll of the same name, see Bikini Atoll . 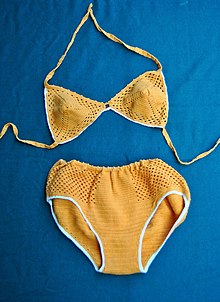 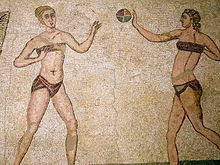 The bikini is a two-piece swimwear for women . It is named after the Bikini Atoll .

History of the bikini

Two-piece suits similar to today's bikini were already worn in ancient times . This is proven by ancient wall paintings and an ancient mosaic from the fourth century AD in the Villa Romana del Casale near Piazza Armerina in Sicily . Nine of the originally ten shown Roman athletes wore bikinis.

Attic bowls from 440 BC. As well as mosaics from the 4th century AD document the early existence of the two-parter. Young women here wear shorts and chest straps that are similar to today's bikini. It remains unclear whether this clothing is underwear , sportswear or swimwear .

The Freiburger Valentin teachers created in 1900 two-piece swimwear, which was carried out by followers of nudism. Around 1920, women's swimsuits were made from jersey , tricot and silk fabrics. Women who exposed too much bare skin in public were arrested on the beach. The trend changed in the 1930s from “elegant paleness” to “healthy” tan. In Germany , the American two-part "Palm Beach Combination" became increasingly popular. The lower part was a short skirt or bodice-like pants, the upper part resembled a bra. In 1932 the Prussian Reich Commissioner and Interior Minister Franz Bracht issued the Zwickeler decree . He banned wearing a two-piece suit in public. The National Socialists tightened the standards of swimwear. Only one-piece suits with an attached leg were allowed. Nevertheless, among other things, Eva Braun two-piece and the bikini continued to be shown in the print media. B. on the cover of the magazine Der Stern 1939. 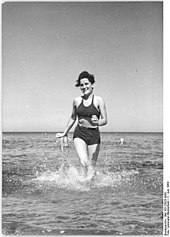 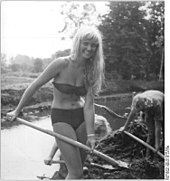 Student on a job assignment in Badrina (1959)

The bikini atoll , a territory of the Marshall Islands, gave its name to the bikini . On July 1, 1946, an American B-29 dropped the first atomic bomb of the post-war period over Bikini Atoll , thus initiating a test series of 23 nuclear weapons tests . Louis Réard then chose "Bikini" as the product name and had it presented to the public by the nude dancer Micheline Bernardini on July 5, 1946 in the Piscine Molitor bath in Paris . Contemporary marketing used the association with the exotic South Sea atoll and the resounding effect of an atomic bomb, which was to be associated with the revolutionary change in dress code. At that time, nuclear tests were rated as “progressive”, “resounding”, “sensational”, “exciting” and so on. The negative long-term effects did not become public awareness until the 1970s, when the permanent contamination of the atoll became known. The bi-bikini can also be associated with “two” in terms of folk etymology (cf. Monokini ).

In 1946 Jacques Heim (designed in 1932) and Bart Louis also tried to bring out a two-piece swimsuit, which they both called "Atom". The product name "Atom" could not establish itself. There is speculation that the "Atom" bikini could not catch on because of the name, as the name turned out to be unsuitable in the shadow of Hiroshima . In the atomic euphoria of the 1950s, however, the atom bomb was still regarded as a panacea for the most diverse civilizational and military problems and was not to be associated with “moral indignation”.

In the first few years, the garment could not establish itself because it was banned in many seaside resorts, including. in Italy , Spain and Portugal . In 1949 the bikini was allowed by the French police prefecture on the Mediterranean, but at the same time banned on the French Atlantic coast. In the USA, too, the bikini was not shown in Hollywood films that were subject to the Hays Code and in beauty pageants .

According to fashion dictates in the 1950s, a wasp waist , round hips and full bosom were characteristic of the ideal image of women. The swimsuits were provided with a figure-sculpting interior that constricted the waist and lifted the chest. Two-parters were unsuitable for this. The bikini went out of style. Nevertheless, there are well-known recordings from 1953 with Marilyn Monroe in a bikini. Brigitte Bardot , who was still relatively unknown at the time, also wore a pink checked bikini at the sixth Cannes International Film Festival in 1953 . In the following year, US Vogue advertised : "Covered: the swimsuit of 1954 ... the swimsuit as a dress - put on, not taken off - long-sleeved, high-necked, fitted or cut out like a dress". In 1959 the women's magazine Constanze wrote : "Bikinis are back in high demand". 1960 one-piece suits dominated . They were complemented by beach capes that women wore over them. The bikini then almost completely disappeared from women's magazines and was only mentioned sporadically. "1960's swimwear preferred bikinis, suits with small sleeves and short styles." 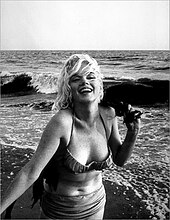 Brian Hyland dedicated the hit Itsy Bitsy Teenie Weenie Yellow Polka Dot Bikini to the bikini in 1960 , which became world famous and among others. by Dalida entitled petit bikini Itsi bitsi gecovert was.

In 1962, the magazine tried friend to make a comeback bikini: "For two years it has been declared dead bikini, with success that he appears more frequently and seductive this year." Ursula Andress gave back the popularity bikini because they in the first James Bond strips chasing 007 Dr. No (1962) appeared in a bikini; Her Dr. No bikini was sold to a collector at auction for about $ 60,000 in 2001 and became the most expensive piece of swimwear to date. The new cinema genre of beach films also “advertised” the bikini. It was often used as a dramaturgical accessory: " Good girls wore a bathing suit and the less good girls appeared in bikinis". In 1963 the bikini euphoria died out again. It was displaced by swimsuits that simulated two-piece design. Their tops were colored or patterned differently than their bottoms, and a belt also reinforced the optical illusion of two-part design. In 1965, bikini bikini wear was tolerated on some beaches. However , it was forbidden on the Munich Viktualienmarkt . When the 17-year-old model Ilonka posed there in a bikini in 1965, she had to do social hours on three weekends.

Economic growth was clearly noticeable in the mid-1960s. With him, a new era of youth revolution began, with which a commercial youth market also emerged. At the same time, a “sex wave” was released. “ Sex sells ” was an advertising slogan. “With a shot of sex, sales could not only be increased in newspapers, magazines, books and films. From car tires to dandruff shampoo, for the first time advertising relied completely unrestrainedly on the new miracle weapon ”.

There are different trends in fashion in the present. On the one hand, there are so-called microkinis - particularly tightly cut bikinis - especially in the USA and Latin America . On the other hand, some Islamic women use swimwear that covers their entire body, so-called burkinis (from “ burqa ” and “bikini”).

There are sports bikinis that are suitable for sporty swimming. With a Mixkini, pants and tops are purchased separately. Usually several pants and top variants are offered. The upper and lower part can be selected in different sizes.

The trousers are to be tied either "in one piece" or at the side.

The Mankini is a marginal phenomenon, swimming trunks with shoulder straps or suspenders that run over the nipples. He became known through the film Borat (2006). A Mankini ban helped the seaside resort of Newquay to improve its image.

A microkini is a triangle bikini that only covers the genitals and nipples. It was created in response to Nudismusverbote with the aim of nudism continue to be close, but without violating the rules.

In the PR China there are regional facekinis to protect against sun and jellyfish.

The volleyball world association FIVB ( Fédération Internationale de Volleyball ) changed the dress code in 2012 . Until then, there was a regulation that women had to wear bikini in beach volleyball . Now the FIVB also allows pants up to three centimeters above the knee. At 15 degrees or less, leggings are also allowed. In addition, the athletes can wear half-sleeved tops. Like all parts, these must be tight-fitting.

In 1997 Steve Reich replied to the question of why he stylized the bikini in his opera Three tales as a main result of human progress addiction: “When I was a child, the Bikini Atoll was destroyed. The next earth-shattering piece of news was that of the invention of the swimsuit called bikini. I had the idea: first there was bikini, nothing was left of it. Before there were swimsuits, now they consisted of practically nothing. "

In Bad Rappenau there is a bikini museum called BikiniARTmuseum .

The word "bikini" has in compound words such as bikini, bikini waxing or bikini figure entrance into the German language found.