The Chinese caterpillar fungus forms stalked collective fruiting bodies ( stromata ). These are slender club-shaped, brown in color and 8–15 cm high. The size can vary, probably due to the type of caterpillar infected. The fruiting body becomes about twice, rarely up to four times as long as the infected caterpillar. The spore-bearing parts ( perithecia ) are formed in the upper third of the stroma.

The Chinese caterpillar fungus can be found in grass and shrubland, which receives at least 350 mm, but usually at least 400 mm of rainfall per year . Scaled sedge are predominantly found in the habitat . The infested caterpillars feed on young roots of the knotweed family , legumes , sour grass family (including scallop sedge), sweet grass and lily family . By grazing in the highlands of Tibet the habitat of the fungus has been significantly increased. It grows at altitudes between 3000  m and 5000  m . It occurs locally in an area of ​​500 meters above sea level around the tree line .

The fungus attacks caterpillars of the genus Thitarodes , which belongs to the butterfly family of rootworms (Hepialidae). This affects 30 species of the 40 or so species of this butterfly genus known from the Tibetan highlands. The infected caterpillars survive the winter in the ground, although they are less deep than uninfected animals. In spring, the fruiting body emerges from the caterpillar's head above the surface of the earth. During the development of the fungus, the substrate is increasingly decomposed until only the soft outer shell remains, which is filled with the mycelium of the fungus.

The fruiting bodies appear in spring from May, on the eastern slopes from mid-April. The fructification lasts until mid-June, at higher altitudes until mid-July. In some regions, the fungus can be found at different altitudes for almost two months. Overdue specimens can survive into August.

The fructification is said to be favored by the high amounts of precipitation in the monsoons that occur earlier . Large amounts of snow in winter have a similar effect, especially in a mild spring. Long-lasting snow cover, however, results in the disintegration of numerous fruiting bodies.

The Chinese caterpillar fungus is endemic to the highlands of Tibet. In this area it is widespread in the southwest and a little less dense in the south. The area runs along the entire southern border of the Tibet Autonomous Region and extends to the core area of distribution over the entire eastern part of Tibet and throughout the southeastern province of Qinghai and the entire north-western province of Sichuan also on the extreme southwest and the outermost Northwest of Gansu and Yunnan provinces . The southern foothills extend to the north of Nepal , Bhutan and India . In addition, the fungus is reported from the Tian Shan and Altai in Xinjiang .

So far, no decline in the occurrence of the Chinese caterpillar fungus has been observed. A decrease in the per capita yield is reported by the collectors, which is attributed to the steadily increasing competition. Also on the part of the dealers no decrease in the available quantities is observed. Studies on the long-term effects of intensive collecting have not yet existed. According to estimates, the potential risk to the fungus is moderate.

The Chinese caterpillar mushroom has probably been collected and used for at least 1,000 years. The mushroom was first mentioned in traditional Tibetan medicine in the 15th century by the doctor Surkhar Nyamnyi Dorje (1439–1475). It is first recorded in traditional Chinese medicine by Wang Ang in 1694 . In the literature of the western world , the first evidence is found in 1736 by the Jesuit priest Jean-Baptiste Du Halde , who was treated with the mushroom by an imperial doctor. The trade of the Chinese caterpillar mushroom between Tibet and China dates back to at least the 17th century. The Tibetans used it as an exchange commodity for tea and silk . The mushroom is still partly used as currency today.

Today the mushroom is valued mainly in the People's Republic of China and other parts of East Asia . It has become a symbol of wealth and is often used as a gift. In addition, it has developed into a culinary status symbol in China, which is particularly important for the Chinese New Year . In addition, the mushroom is also in great demand in Japan and Korea. The Chinese caterpillar mushroom in unprocessed form has not yet been widespread in the western markets. The products offered are mostly pills, made from the mycelium of the fungus, which is artificially grown.

The profitable source of income for the Chinese caterpillar mushroom collectors has brought about profound changes in the social and economic conditions in the region over the past 15 years. Income favors access to medical care, training, transportation (especially motorcycles), consumer goods and bank loans. In addition, goods and services within the rural population are increasingly paid for in cash than z. B. by barter . Especially the inhabitants in the core area of ​​the distribution area of ​​the Chinese caterpillar fungus are now heavily dependent on the income from collecting activities.

Between 1956 and 1981, the collection of the Chinese caterpillar fungus was ordered by the state, with certain quotas being observed. These were mostly 3 copies that had to be passed on to the authorities; further finds were traded.

Due to the high demand, participation in the commercial collecting activity is very high today. In some districts (e.g. Dêngqên ) this is over half of the total population. Hundreds of millions of specimens of the Chinese caterpillar fungus are collected in its natural range every year. Exact data on collected quantities are lacking for many areas; Estimates assume a total of 140 to 150 tons per year. The collectors are shepherds and farmers, as well as a few townspeople who camp in the mushroom's range during the collecting season. Larger warehouses are mostly on streets and often have grocery stores, restaurants, and entertainment options such as pool tables . Often the mushrooms are sold straight from the camps.

The daily yield of a collector is between a few to several dozen , usually between 5 and 10 copies. A find brings in about 8 to 16 yuan , which is about half a day of road building work. In one day, three to seven times the normal wage in this region or even the salary of a whole month can be achieved.

In most regions of Tibet a permit is given to collect the mushroom. The costs for local residents are between 10 and 300 yuan per person per season. For immigrants, including residents of neighboring districts, the price is significantly higher; in 2006 it was up to 4,000 yuan. In some districts such as Riwoqê or Dêngqên , collective bans have been issued for outsiders. This led to civil unrest and even rioting with some deaths in 2004 and 2005.

In large parts of the highlands of Tibet, the collection of the Chinese caterpillar mushroom is the most important source of income. In the Tibet Autonomous Region , trade in the mushroom makes up 8.5% of the gross domestic product and thus the most important economic sector in the region (2004). For the rural population of this region (93%), the share of the total per capita income in cash from collecting is 25%; the share of total income is at least 40%. In Qamdo and Nagqu , which are among the main collection areas, collecting accounts for 70 to 90% of household income.

The FAZ reported on the importance of the mushroom in some areas of Nepal on January 23, 2016. 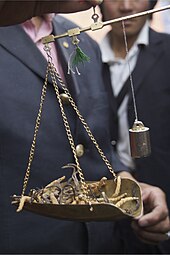 The Chinese caterpillar mushroom has been valued for centuries and is still used as currency today. During the Cultural Revolution between 1966 and 1976, the mushroom market collapsed. At that time, one kg cost 21 yuan. From the 1980s onwards, prices rose very quickly. The value of the Chinese caterpillar mushroom increased roughly nine-fold between 1997 and mid-2008. In mid-2008 he achieved z. B. in Lhasa a price between 60,000 and 160,000 yuan per kg. In Shanghai at the time, high-quality specimens were selling for up to 320,000 yuan per kg. The pills obtained from the mycelium only fetch a fraction of these prices.

The quality of the caterpillar fungus is mainly determined by the size of the infected caterpillar, but also by the size ratio of the stroma and the caterpillar and the firmness of the caterpillar. The latter two characteristics are indicative of the age of the fungus and depend on when it was picked. The highest price is achieved by specimens whose stromata are about as long as the caterpillar. At this stage, the potency of the mushroom is considered to be the highest, which makes these particularly desirable. The Tibetans call it nga bu , which means something like "formerly Jartsa Gunbu ". At this point in time, the reproductive organs ( perithecia ) have not yet developed. By removing the fungus from the soil, its development is interrupted. Older specimens, in which the caterpillar has been severely decomposed, are left at the place where they were found because they are almost worthless. In Tibetan, the mushroom is then called tshar bu , which roughly means "finished Jartsa Gunbu ".

Use and medicinal effects

The Chinese caterpillar mushroom is often cooked with chicken or duck .

Research suggests that the fungus works against tumors , including cancer , and viruses . In addition, immune and cholesterol regulating , antioxidant effects as well as an increase in endurance and libido were observed.