The specialty chalk manufacturer OMYA produces in the port of Emden

Emden is also an important ferry port to the North Sea island of Borkum . The port is connected to the railway network with the Emden Außenhafen station indirectly via the Emden main station. 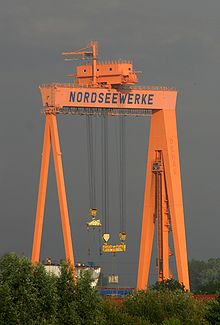 A catamaran from Reederei AG Ems on Borkumkai

A RoRo ship loaded with a vehicle leaves the Emden outer harbor, on the right the west pier (port entrance).

Car transporter in the port station

The Cassens shipyard seen from the harbor side

Link between the seaport and inland waterways: the Borssum lock

The port has always been the lifeblood of the city - without it it would not have come into being. The port goes back to the beginning of the settlement of what is today the urban area of ​​Emden: Around the year 800 a Frisian trading settlement emerged on the northern bank of the mouth of the Ems. Around 1600 the port of Emden was one of the most important in Northern Europe. Since around 1900 the seaport of Emden has developed into a modern transshipment point, which also attracted industrial settlements. In addition to the shipyards , the Volkswagen factory in Emden should be mentioned here: In 1964, the VW Group made a conscious decision in favor of a port city as its new production site - without the port, East Frisia's largest industrial employer by far would not have even settled in Emden. Thus almost the entire economic life of the city depends - directly and indirectly - on the port. The port of Emden is the third largest port on the German North Sea coast in terms of area.

The history of the port of Emden can be divided into two parts: on the one hand, from the development of a Frisian trading settlement around the year 800 to around 1870. In the 1750s, the ships of the Emden East Asian trading company made trips to Canton in China from here . Since the end of the 19th century , the port's image has changed into a modern industrial port.

For almost the entire 20th century, Emden was known as the "seaport of the Ruhr area ". Coal from the Ruhr area was transported to Emden partly by rail, partly via the Dortmund-Ems Canal , and in the opposite direction, imported iron ore for the steel industry in the Ruhr area was shipped there via Emden. The ore was mainly handled on the south quay built between 1913 and 1926.

The last ore freighter moored in Emden in 1986. Rotterdam had overtaken Emden for these products. Four reasons played a key role: Firstly, the large bulk carriers could not (any longer) call at the port of Emden due to their draft and had to be costly “emptied” near Borkum, which means that barges already took over part of the cargo there. A freighter could only call at the port of Emden after it had been “lightened”.

In addition, the inland waterways got bigger and bigger, so that the Dortmund-Ems Canal (and its locks ) were no longer sufficient for new generations of inland waterways. The Europeanization of traffic flows did the rest, as did the decline of the steel industry, especially in the eastern part of the Ruhr area. The blast furnaces in Duisburg , the most important steel location in Germany, are easier to reach via the Rhine .

Vehicle handling is now the most important pillar of the Emden port. The models of the VW group (including subsidiaries) are imported and exported via Emden, which makes the port of Emden the third largest car loading port in Europe (after Bruges port Zeebrugge and Bremerhaven ). Other handling products include forest products and liquid chalk (both for the UPM Nordland Papier paper mill in Dörpen ) as well as building materials, grain, magnesium chloride , mineral oil and petroleum products, iron and steel.

For some years now, Emden has also been active as a transshipment port for wind turbines . These come from the manufacturer Enercon in neighboring Aurich , which are exported from the port of Emden. The BARD company also manufactured wind energy systems in the port of Emden. Emden is currently being set up as a base port for offshore wind energy systems in the North Sea.

Another large industrial employer was the North Sea Works . In the former large shipyard, 700 employees manufactured parts for offshore wind turbines at peak times. Around 60 employees produce ship parts for Meyer Werft on the site. Shipyard operations (without new buildings, only repairs and conversions) will be continued on the site by Emder Werft und Dockbetriebe GmbH .

The port of Emden can be reached seaward through two locks . The older and smaller Nesserlander Schleuse (built 1883–1888) is primarily used for inland and sport shipping as well as for water level regulation in the port. However, it was closed to shipping for some time due to construction work. By 2018, the entrance width was increased to 18 meters and the chamber length to 180 meters. The large sea lock is used for sea and partly also for inland shipping. With a length of 260 meters, it was considered the largest sea lock of its kind for some time after its completion in 1913.

The port has a total area of ​​730 hectares, including 210 hectares of water. The quay length in the inland port is 7.3 kilometers, that in the outer port (beyond the sea locks, i.e. directly on the Ems) is 1.6 kilometers.

The port has several RoRo ramps, a container -Verladebrücke and several cranes for loading bulk material , as well as the Emden outer harbor a passenger station at Borkumkai in close proximity to the ferry the AG Ems to the island of Borkum .

The Ems traffic center of the Waterways and Shipping Office (WSA) Emden an der Knock is responsible for the radar monitoring and control of shipping ( Vessel Traffic Service ) of the entire Ems estuary as part of a German-Dutch cooperation .

The following are the individual port sections, in some cases with the names of cargo handled, companies and institutions operating there, as well as port infrastructure. The overview does not claim to be complete:

In addition to the handling of goods, the port of Emden is also of considerable importance for tourism . For a place in the outer harbor the ferries to the North Sea island of Borkum from, on the other hand the harbor for Skipper makes the passage of butene (lake) to within ( inland waterways in East Friesland).

In addition, old areas that are no longer used for the handling of goods are used for recreational shipping and also for urban development (see district articles, authorities district and Klein-Faldern ).