About 7 km south of Innsbruck, the bridge spans the Wipptal between Patsch and Schönberg . To the east of the bridge is the Patsch-Igls junction of the Brenner motorway near Patsch, to the west of the Europabrücke car park (Schönberg municipality) with the listed European chapel . Under the bridge are the building of the Sill driven Sillwerks , slightly higher running on the left side of the valley the Brennerstraße  B 182 and on the right side of the valley, partly in the tunnel, the tracks of the burner rail . The route over the Brenner Pass is one of the most important old streets in Central Europe. For the first stage, the route of the Via Raetia from Roman times chose the steep ascent via Unterberg ( Stephansbrücke ) to Schönberg on the left side of the valley, which is easily accessible on the lower reaches. All other paths followed this, up to Brennerstrasse. 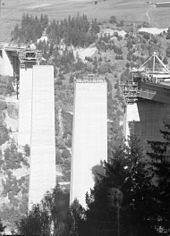 The Europe Bridge under construction (1962)

In 1957 the construction of a motorway over the Alps was considered for the first time . Between Innsbruck and the Brenner Pass, a height difference of 772 m had to be mastered over the distance of 34.5 km, but the maximum gradient of the route should not exceed 6%. Therefore, an earlier ascent along the Sill was necessary, which just as with the Brennerbahn only made sense to the right of the Sill.

In the course of the 1960s, this project was implemented with the construction of the mountain motorway over the Brenner. Originally the bridge structure Europabrücke was not included in the planning of the Brenner motorway. Due to interventions by the citizens of Schönberg, who hoped that the motorway would stimulate tourism for the Stubai , the course of the road was changed to change the valley side, which resulted in the construction of the Europe Bridge.

The official preliminary draft prepared for the tender from December 1958 provided for a four-lane bridge with a 17 m high strut framework. A number of alternative offers were submitted with the offers, including a pipe arch bridge with a span of 410 m, reinforced concrete arches with spans of 280 and 270 m and the box girder bridge planned by Waagner-Biro and VÖEST , which was implemented.

During the award, an additional crawl lane was arranged uphill and the bridge was therefore widened from 20.00 m to 21.60 m. In the course of the detailed planning, further changes were made, such as B. the arrangement of crash barriers in the central dividing strip. After detailed studies and calculations, the deck slab was widened again, now to 22.20 m. In addition to the four lanes uphill, the bridge was given a crawl lane and narrow walkways protected by guardrails on both sides. The roadway leading uphill was 10.60 m wide between the guardrails, the roadway leading down the valley was only 8.30 m, so that the middle separating strip ran slightly to the side of the bridge axis.

The construction of the bridge began on April 25, 1959 with the groundbreaking ceremony by the Federal Minister for Trade and Reconstruction , Fritz Bock , and the Governor of Tyrol, Hans Tschiggfrey . The construction project previously known as Sillbrücke III was named Europabrücke.

On November 17, 1963, the bridge was opened to traffic by Federal Chancellor Alfons Gorbach with the words "[...] connect the peoples of Europe in peace and freedom [...]" .

Since then, the bridge has been strengthened and renovated many times.

The total of 815 m long bridge structure consists of one on the abutment incipient Dub 120 m long approach bridge of reinforced concrete , a transition structure and the 657 m long main bridge with five reinforced concrete - pillars and a track support from an orthotropic panel on a steel box girder . The main bridge ends at the Schönberg abutment.

With a height of 190 m above the Sill, it was the highest bridge in Europe until it was replaced in 1973 by the Mala-Rijeka viaduct and in 1974 by the Viadotto Italia and the Viadotto Sfalassà in Calabria .

The plan of the approach bridge describes an arch with a radius of 400 m, which merges into a clothoid shortly before the transition structure . This transition arch extends 39 m into the second field of the main bridge. The Schönberg abutment is also located in a transition arch that begins roughly in the middle of the last field in front of the abutment.

The road has a gradient of 4.05% over its entire length towards Innsbruck .

The initial width of 22.20 m was increased in 1984 by 1.2 m on each side to a total of 24.6 m. Since then, the bridge has had three lanes in each direction of travel , the right of which serves as a crawl lane for heavy heavy traffic, as well as a sidewalk on both sides surrounded by high fences .

The approach bridge has a continuous beam , 120 m long girder made of a seven- cell hollow plate made of prestressed concrete, which describes an arc with a radius of 400 m in the plan. Three reinforced concrete pendulum walls serve as support ; which are 65 cm thick and up to 15 m high. The span between the Patsch abutment and the transition structure is 27 + 33 + 33 + 27 m.

The main bridge rests on five reinforced concrete - pillars , wherein the central pillar with the highest is 146.5 m. When it was completed, it was the tallest massive bridge pillar in the world, until it was surpassed in 1974 by the 150 m high pillars of the Viadotto Rago in Calabria . The pillars have a uniform tightening of 2.5%, i.e. H. their cross-section tapers with increasing height. They have a three-cell hollow cross-section, whereby the two inner walls are uniformly 45 cm thick, while the thickness of the outer walls decreases from 55 cm to 35 cm. The walls are internally stiffened by horizontal cross frames at a distance of 20 cm from each other.

The 657 m long superstructure of the main bridge consists of a continuous steel box girder with an orthotropic deck. The box girder is 10.0 m wide and 7.7 m high over the 198 m wide main opening. Outside the main opening, its height decreases evenly down to 5.6 m at the Patsch abutment and to 4.7 m at the more distant and higher abutment Schönberg. Originally the orthotropic carriageway slab cantilevered 6.10 m on both sides, and since 1984 it has been widened by 7.30 m. The superstructure was cantilevered . The road surface, which has since been renewed several times, was originally a 5 cm thick bitumen surface.

To inspect the underside of the superstructure, an inspection car was first built, which runs on rails that are attached to the sides of the box girder just below the supporting plate. Its height can be adjusted to the decreasing height of the box girder. To pass the pillars, it is divided in the middle and the two halves swiveled out to the side. To do this, the halves must also travel the short distance above the pillars on a second rail in the lower area of ​​the hollow box walls. It was later supplemented by a second. Both were revised and improved in 1996.

The Brenner autobahn is one of the most important north-south traffic arteries in Europe, and the volume of traffic is correspondingly high: for 2001, average daily traffic (DTV) of around 40,000 and a peak load of over 70,000 vehicles per day were specified, with heavy traffic accounting for 15 , 9%.

The construction of the bridge and the highway claimed 23 lives. Obviously ignorant of the fact that the pillars are hollow, the modern legend stubbornly persists that it was not possible to rescue injured workers when the pillars were raised, as otherwise the statics would have been impaired. Accordingly, the legend that some construction workers were concreted in the pillars of the bridge does not fall silent.

The Europabrücke is the subject of numerous artistic representations and a popular photo opportunity (the most convenient location is by the chapel on the upper parking lot). It is also the subject of some postage stamps. Its construction, including the construction of the substructure, can be seen from the "old Brennerstraße ", which winds up in many serpentines at the foot of the bridge piers.

In the Cold War space defense plan , the bridge, like the entire A 13, played an important tactical role, so it is still equipped with several military barriers and blasting shafts.

Community structure of Schönberg in the Stubai Valley

Monument protection objects in Schönberg in the Stubai Valley