Glarus thrust on the Atlas (right) and Tschingelhörner (left)

The Glarus thrust occurred when, due to plate tectonics, an older, uplifted layer of rock pushed 40 kilometers north over a younger layer of rock. The upper layer of reddish verrucano rock , originally ten to 15 kilometers thick, is around 260 to 300 million years old ( Permian ). The lower, younger layer of schisty flysch , on the other hand, is only 35 to 50 million years old ( paleogene ). The older rock is partly pushed over by Mesozoic layers (Jurassic, Chalk). This storage of older over younger rock is particularly easy to recognize from a light-colored limestone separating layer .

The thrust at the Tschingelhörner between Elm and Flims, known from the Martinsloch, and at a point in the lower Sernftal near Sool, known as the “Lochsite” (also known as the Lochseite), can be clearly seen . The place is in an easily accessible place in the valley floor. A scale relief image of this landscape is shown in the American Museum of Natural History in New York .

Under the name Tectonic Arena Sardona , the region of the Glarus Thrust was added to the UNESCO World Heritage List in July 2008 with an area of ​​32,850 hectares . The world heritage area includes seven three-thousand-meter peaks - including the eponymous Piz Sardona and the Ringelspitz - as well as the Pizol . The tectonic arena extends over mostly high alpine landscapes in the area of ​​13 communities between the Vorderrheintal , the Linthtal and the Walensee . Of these, four ( Laax , Flims, Trin , Tamins ) are in Graubünden, six ( Pfäfers , Bad Ragaz , Vilters , Mels , Flums , Quarten ) in the canton of St. Gallen and the other three ( Glarus Süd , Glarus and Glarus Nord) - Former communities of Elm, Matt , Engi , Sool, Ennenda , Mollis , Filzbach , Obstalden , Mühlehorn ) in the canton of Glarus. The Sardona tectonic arena forms the core area of ​​the Sardona Geopark .

After a study by the International Union for Conservation of Nature and Natural Resources (IUCN) initially did not want to attribute any exceptional, universal value to the Glarus thrust due to the dossier available to it, the federal government withdrew a first application to UNESCO and in 2006 a revised dossier for one new application created. In March 2008, on the recommendation of the IUCN, the candidacy was expanded to include the importance of the area for the mountain building processes and for the understanding of plate tectonics . UNESCO placed the main focus on the educational and scientific aspect of the region. Due to the good visibility of the layers, the mountain building process is understandable even for the layperson.

Significance for the theory of mountain formation 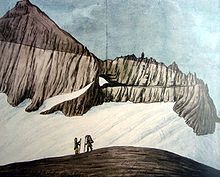 The Glarus thrust contributed to knowledge about mountain formation through thrusting of rock covers . Investigations on the Glarus thrust caused the Swiss scientist Hans Conrad Escher von der Linth to question the theory of mountain formation due to earth shrinkage , which had been valid until then . His son Arnold Escher von der Linth , geology professor at the University of Zurich, hesitated and could not bring himself to the interpretation, which was so new at the time, in contrast to the famous English geologist Roderick Murchison , who was his guest in 1848. Murchison saw the explanatory model confirmed by observations in Scotland. Due to hostile and mocking reactions to the findings of his father, however, he published a different theory instead in 1866 and explained the mountain stratification with a so-called “Glarus double fold”. This theory suggested that two folds meeting from north and south would have met at the Foopass. As a result, a flysch trough that would have been discarded several times would have arisen at the contact surface of the two folds.

Independently of this, the French geologist Marcel Alexandre Bertrand postulated a thrust as the cause of the observed rock arrangement in the Glarus Alps in 1884 . However, because he derived his findings from the geology of the Ardennes and had never been to the Glarus Alps himself, his statements were ignored by the prominent Alpine geologists Heim and Rothpletz . Archibald Geikie recognized mountain thrusts in the Scottish highlands as early as 1883 . The Swiss geology professor Albert Heim, successor to Escher von Linth at the ETH Zurich, was initially - for example in a book from 1891 - one of the main proponents of the double fold theory and, in the 1890s, had a heated argument with August Rothpletz about the thrusts in the The Alps and in other mountainous areas around the world were used as the primary explanatory model, although from a later perspective this is not the case in some cases. The ceiling theory now received support from studies by the geologists from western Switzerland, Hans Schardt (1893) and Maurice Lugeon . And Heim also recognized the ceiling theory as an explanation for the Glarus thrust in 1902 (in a letter to Lugeon). Maurice Lugeon subsequently published this research letter from Heim. Today, geology also takes into account an older folding phase in a finer differentiation when interpreting the complex sequence of layers of the Glarus thrust.

Information sign at the border of the world heritage area

Thrust on (from left) Atlas, Piz Segnas and far right Piz Dolf . The thorn in the background is Piz Sardona . View from the Fil de Cassons