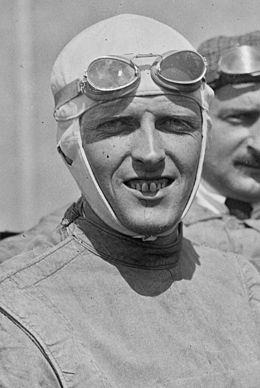 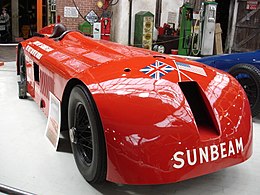 Henry Segrave on the deck of Miss Alacrity, in a motorboat race on Lake Templin in 1929

Henry Segrave was born in Baltimore , Maryland, USA . His father Charles William Segrave (1867-1951) was Irish and married the American Mary Lucy Harwood . Henry Segrave spent the first years of his life in Ireland and came to England in the 1910s to complete his education at Bilton Grange , Eton College and the Royal Military Academy Sandhurst . Segrave was a British citizen as Ireland was part of the British Kingdom at the time.

Segrave was in 1930 by George V for Knights defeated. He was married to Lady Doris Segrave, née Stocker .

In 1914, at the beginning of the First World War , Segrave was drafted into the British Army . He came to the Royal Warwickshire Regiment at Budbrooke Barracks in Warwickshire , where he received his basic training. In 1915, as a lieutenant in the infantry , he fought with the 2nd battalion of the regiment in France and was seriously wounded in close combat. In 1916 he trained as an aviator with the Royal Flying Corps and served under Hugh Trenchard in the Royal Air Force . Severely wounded, he survived a crash after a dogfight. He saw the end of the war as a Squadron Leader and was accepted into the administration of the Air Force. When the Air Force cut its large number of staff in 1919, Segrave was fired because of his wounds. He then worked for a few months at the British Embassy in Washington .

Henri Segrave began motorsport in 1919, immediately after returning from the United States. His first vehicle was an Opel 14/30 hp built in 1914. He drove uphill races in the two-door coupé . Segrave became a works driver at Sunbeam-Talbot-Darracq and drove the Talbot Grand Prix cars developed by Louis Coatalen . He competed in the 1921 French Grand Prix in Le Mans . Jimmy Murphy won the race on a Duesenberg . Henry Segrave came in ninth. In 1921 the Junior Car Club , now the British Automobile Racing Club , hosted an endurance race at Brooklands Racecourse . On the 1907 opened the race - and test track that was 200-mile race , the first race event for a long race distance. Segrave won the race on a Talbot-Darracq 56 , just ahead of teammates Kenelm Lee Guinness and Malcolm Campbell .

In 1922 he competed in the Tourist Trophy (failure due to a defect in the magneto), the French Grand Prix (failure after engine failure), finished third in the 200-mile race in Brooklands , third in the X Coupe des Voiturettes in Le Mans and fourth in the II Gran Premio do Penya Rhin .

In 1923 he was the first Briton to win a Grand Prix race in a British racing car . At the French Grand Prix , he won ahead of his teammates Albert Divo and Ernest Friederich in the Bugatti Type 30 . He achieved another success at this year's Grand Prix de Boulogne by winning a Talbot 70 ahead of Robert Benoist in the Salmson .

In 1924 he won the Gran Premio de San Sebastián ahead of Bartolomeo Costantini in a Bugatti Type 35 and André Morel , who drove a Delage 2LCV. In 1925 he started with his Sunbeam teammate George Duller in the Le Mans 24-hour race . The duo had to give up the race prematurely after a clutch damage on the Sunbeam Sport Le Mans. His last victory was at the Trophée de Provence in 1926 , where he won the final run on a Talbot 70. After the end of the 1927 season, he ended his driving career, became managing director of a cement factory and concentrated his sporting activities on his record drives.

He made his last record drive with a vehicle that, although it was only used once, is one of the most legendary record-breaking cars. The Golden Arrow was at Thrupp & Maberly built for Segrave and had a W12 - Napier Lion -Flugzeugmotor 23.9-liter displacement and an output of 937.95 PS. On March 29, 1929, Segrave was driving 231.56 miles or 372.66 km / h for the kilometer and 203.79 miles and 372.34 km / h for the mile at Daytona Beach. It was Segrave's last attempt to set a record on land. Two days later, he witnessed the American Lee Bible having a fatal accident on Ormond Beach while trying to break the record with the White Triplex Spirit of Elkdom .

Even before his last land record run, Segrave had dealt with motor boats . In 1928 he had commissioned the British Power Boat Company to build a racing boat. Hubert Scott-Paine designed Miss England I , a boat that Segrave wanted to use in the Harmsworth Trophy . The boat was brought to the United States by ship together with the Golden Arrow.

Immediately after his land record, Segrave went to Miami to contest a motorboat race with Miss England I against Garfield Wood . Wood was the first person to go faster than 90 miles in a boat on the water. He remained unbeaten in motorboat races for nine years, losing to Segrave. Technical inadequacies found in Miss England I should be weeded out on a newly commissioned boat. Until the completion of Miss England II , he drove motorboat races in Europe.

To set a new record, two attempts had to be made in the opposite direction within an hour. The time for the journey over one nautical mile with a flying start was measured. The speed of the run was calculated from the time measured, and the record was then calculated from the average of the two runs. To be recognized as a new record, the speed had to be at least a factor of 1.003 higher than the previous record.

On board the boat were the mechanic Michael Willcocks and Walter Halwell, an engineer from Rolls-Royce , who had supplied the 3600 hp turbine for the boat. The first run on the route between Lakeside and Ambleside , the speed was 96.41 miles. On the return trip the boat was 101.11 miles fast. The average speed of 98.76 miles meant a new world record. Since the timekeepers' calculations were taking a long time, Segrave was unaware of the record when he impatiently set off for another attempt. Just before the end of the route, the boat suddenly hit a hook and then rose steeply. All three occupants were thrown from the boat into the water. Segrave and Willcocks injured could be rescued during the rescue measures immediately initiated. Halwell's body was later found; He was still holding the table with the speed records in his hand.

Segrave and Willcocks were taken to a hospital. Both had broken. Willcocks survived; Segrave died of hemoptysis from a lung injury shortly after learning that he had set a new record.