The fifth season of the German reality show Ich bin ein Star - Get me out of here! was broadcast from January 14-29, 2011.

Although Dirk Bach announced it in the last episode of the fourth season, the fifth season of the German reality show Ich bin ein Star - Get me out of here! canceled on June 11, 2009 due to low number of advertising bookings, which had already appeared in 2009 in the form of advertising blocks that were disproportionately short for the reach, for 2010.

The fifth season aired January 14-29, 2011. For the first time there were eleven candidates. Sarah Knappik left the camp on January 25, 2011 after five candidates had threatened to leave the camp if they were to remain in the camp. Peer Kusmagk was chosen as the winner of the season and won the final against Katy Karrenbauer and Thomas Rupprath. 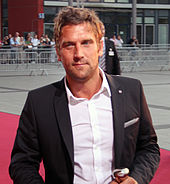 Peer Kusmagk: Jungle King of the fifth season
1 Knappik left the show voluntarily (at the request of other participants)

The season finale as well as the eleventh and twelfth editions, which dealt with the escalating dispute over Sarah Knappik and her subsequent voluntary departure, achieved the highest market shares . The eleventh program on January 24, 2011 saw an average of 8.66 million viewers aged 3 and over, with a market share of 47.5 percent in the target group. The program Extra - Das RTL-Magazin , which was shown afterwards and which also dealt with the events in the jungle camp, had an even higher market share in the target group at 49.7 percent. The twelfth show on January 25, 2011, which was extended to 1:45 hours, achieved the highest market share of the season with 50.3 percent in the target group; only the finale of the first season achieved an even higher rate (54.1 percent). The final on January 29, 2011 saw an average of 8.93 million people, making it the episode with the highest number of viewers of all seasons.

Issues of I'm a Celebrity - Get Me Out of Here!

"Jungle Kings" by Ich bin ein Star - Get me out of here!