The following important information is missing from this article or section:
Transport, economy ...
Help Wikipedia by researching and pasting it . 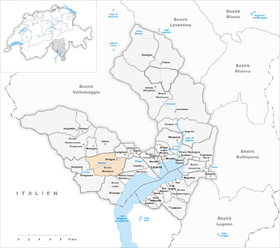 Intragna is 369  m above sea level. M. on the flattened mountain spur between the two valleys of the Melezza and the Isorno , at the entrance to the valleys of Onsernone and Centovalli and at the junction of the two strong torrents Isorno and Melezza, in the middle of rich vineyards and old chestnut trees. The hamlets of Calezzo, Corcapolo with Salmina, Costa, Cremaso, Golino, Pila, Rasa , Vosa and Verdasio with Bolle and Sassalto belonged to the former municipality .

The medieval town center is more reminiscent of a small town than a village, with its three- to four-story houses built closely together, partly unplastered from local quarry stone, partly plastered and painted in color, and the central square with the arcade-decorated house of the municipal administration.

The first mention of the village - as Intranea - comes from the year 1272. In the Middle Ages, the bishops of Como and the Capitanei of Locarno belonged to the landlords. Together with Golino and Verdasio, the village formed a Vicinia (neighborhood), the first statutes of which date from 1365 (revised 1469). It had the right to delegate a representative to the council of the Pieve of Locarno. The mayor (console) was provided alternately for five years by Intragna, then for one each by Golino and Verdasio. From the 16th to the 18th century Intragna was part of the regional bailiwick of Locarno .

Ecclesiastically, Intragna was originally dependent on the Golino (Church of S. Giorgio mentioned in 1297) located below in the Melezza valley; However, the chapel of S. Gottardo in Intragna, consecrated in 1474, separated in 1653 from the Golino parish, established in the 16th century. The current church was built in 1722–38, the bell tower was added in 1765–75; the latter is the highest campanile in the canton of Ticino with a height of 65 m. For centuries, Intragna was primarily characterized by agriculture (arable farming, cattle breeding, viticulture), but more of a place on the Pedemonte than on the alpine plateau with alpine farming. From the 16th century, income from seasonal emigration (especially chimney sweeps to Lombardy and Piedmont) was added. In the second half of the 19th century there was a strong emigration overseas (America, Australia). The commercial and industrial production in a watch factory, a quarry, a carpenter's workshop and the manufacture of pedule (cloth shoes with hemp soles, from the beginning of the 20th century to 1962) came to a standstill in the 1960s. The canton road was built in 1889–93, and in 1923 the station on the Locarno-Domodossola railway line. In 1929, today's S. Donato retirement and nursing home was opened. While the population in the higher settlements has declined sharply, Intragna and Golino have grown since 1970 thanks to their proximity to Locarno, where people can commute to work. Accordingly, new residential buildings and quarters have emerged in and around the medieval village center.

The village image is classified in the inventory of protected sites in Switzerland (ISOS) as a site of national importance in Switzerland.

Intragna is located at the entrance to the major tourist areas of the Centovalli and Onsernone , and is also conveniently located on the cantonal road and on the Centovalli Railway , which crosses the Isorno river with an 82 m high viaduct below the town. The train enables a direct connection to Locarno and Domodossola , which is on the Simplon line . Intragna is the starting point of a cable car to Costa with an intermediate station for the town of Pila. Intragna is also home to the canton's highest campanile at 65.114 m . Apart from the impressive Centovalli e Pedemonte regional museum and the sights described, Intragna has few tourist facilities: two smaller hotels (there are two more in Golino), a number of privately rented holiday apartments and three restaurants.

Political communities in the Melezza district