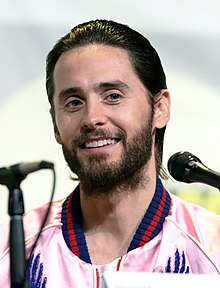 Jared Joseph Leto (born December 26, 1971 in Bossier City , Louisiana ) is an American actor , singer , guitarist and songwriter for the musical group Thirty Seconds to Mars . For the role of the transsexual Rayon in the drama Dallas Buyers Club , he received the Oscar for best supporting actor in 2014 .

Leto grew up in Haiti and Colorado , among others . He graduated from the Emerson Preparatory School in Washington, DC in 1989. He studied at the University of the Arts in Philadelphia and then went to the School of Visual Arts (SVA) in New York City . From 1999 to 2003 he was in a relationship with actress Cameron Diaz .

In 1992 he moved to Los Angeles . He made his breakthrough as an actor with the television series Willkommen im Leben ( My So-Called Life ), in which he starred in 19 episodes from 1994 to 1995. He then played roles in larger film productions, including supporting roles in films such as Der schmale Grat , Fight Club and American Psycho .

He only received more attention in 2000 when he portrayed a heroin addict in the film Requiem for a Dream . Roles in major productions such as Alexander by Oliver Stone and Panic Room by David Fincher followed. In the 2005 film Lord of War he played Vitaly Orlov , the brother of the arms dealer Yuri Orlov ( Nicolas Cage ). For his role as Mark David Chapman , the murderer of John Lennon , in the film Chapter 27 - The Murder of John Lennon Leto gained about 28 kilograms. After the end of the shooting, he starved himself of this excess weight again within a very short time.

After a two-year tour with his band, Leto began filming the movie Dallas Buyers Club in late 2012 . Jared Leto played the transsexual Rayon alongside Matthew McConaughey as Ron Woodroof . For this role he lost about 18 kilograms. The portrayal of Rayon earned Leto the New York Film Critics Circle Award , the Golden Globe Award , the Screen Actors Guild Award and numerous other awards for Best Supporting Actor . He also received an Oscar in this category .

Leto took on the role of the Joker in the comic book adaptation Suicide Squad, which appeared in August 2016 . In the science fiction film Blade Runner 2049 and the accompanying short film 2036: Nexus Dawn , he portrayed the entrepreneur Niander Wallace .

In 1998 Jared Leto founded the alternative rock band Thirty Seconds to Mars with his brother Shannon Leto . In this music group Jared Leto has been a singer and rhythm guitarist from the start and is responsible for a large part of the lyrics and music. The second album A Beautiful Lie (2005) turned out to be a bestseller, with numerous festival appearances and awards.

Leto also took on the role of director for some of his band's music videos, for which he used the pseudonyms Angakok Panipaq or Bartholomew Cubbins . He takes great care that his music group is not associated or promoted with his popularity as an actor, but only because of its own quality. In 2013 the fourth album "Love, Lust, Faith + Dreams" came out, in which "City of Angels", "Up in the Air" and "Do or Die" became very popular.