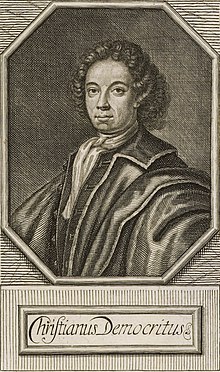 He first completed a basic philosophical course at the University of Giessen , which he completed in 1693 as a master's degree. Then he began to study theology before he worked as a private tutor in the Odenwald. Already during his studies in Giessen he came into contact with Pietism . He lived in the Giessen scholarship institution, which was run by the Pietist Johann Heinrich Mey, for at least four semesters and had to attend the courses there. In Giessen, however, he did not want to join the new piety movement. Instead, he acted as a pietist hater and even wrote an anti-pietist polemic, the manuscript of which was lost. During an academic year in Strasbourg in 1695/96, however, the seeds that had been sown in the strongly pietistic Giessen University began to grow. While Dippel had apparently also occupied himself with alchemical studies in Strasbourg, he turned to pietism in the spirit of the latter after reading several writings by Philipp Jakob Spener .

After returning to the Hessian homeland, Dippel tried in vain for a professorship at the Giessen University. For a short time he was instead employed as a prince tutor at the Hesse-Darmstadt court. In the summer of 1697 there was a momentous turn in the life of the young theologian. Since that time he can be considered a radical pietist . But Gottfried Arnold's influence on this development is probably far less than previously assumed. Since then, Dippel has published numerous popular pamphlets against Orthodoxy .

From 1704 to 1707 he lived in Berlin , where he tried, as an alchemist, to transform silver and mercury into gold, partly in collaboration with Johann Georg Rosenbach . He was held in high regard by King Frederick I and was also called in when it came to assessing the skills of the impostor and alchemist Domenico Manuel Caetano , who was supposed to produce gold for the king, failed in it and was executed. He saw through some of Caetano's tricks, but was fooled by them during a demonstration of the supposed transmutation of mercury into silver, which he believed to be real. When he, at the request of Charles XII. In 1707 he was temporarily arrested for a pamphlet against Johann Friedrich Mayer (Superintendent in Pomerania, which was Swedish at the time), and he fled Berlin in a Swedish uniform. He stayed in Holland until 1714 , where he bought a house in Maarsen (on the canal between Amsterdam and Utrecht) and received citizenship, received his doctorate in medicine in Leiden in 1711 and worked successfully as a doctor, alchemist and chemist. From 1714 to 1717 he lived in Altona , which was then Danish , where he was sentenced to life imprisonment for defaming a high-ranking official and was incarcerated on the island of Bornholm . He was released from prison in 1726 on the instructions of the Danish Queen and then went to Kristianstad at the invitation of the rich merchant Johan Hoffmeister (1699–1744) and to Stockholm in 1727 , where he again worked as a doctor at court. Expelled from Sweden in 1728, he visited his followers in Lauenburg , Lüneburg , Celle , Hanover and Goslar . The superintendents of Lüneburg and Clausthal achieved that he was expelled from the country in December 1729.

In the last years of his life he lived in Berleburg , at times also directly in the Berleburg Castle of Count Casimir zu Sayn-Wittgenstein-Berleburg . This work is also mentioned several times in the count's diaries. He was buried in the Protestant church Bad Laasphe , the seat of the Counts of Sayn-Wittgenstein-Hohenstein at that time . The Dippelshof, located near Traisa , a district of the municipality of Mühltal in the Darmstadt-Dieburg district , is named after his older brother Johann Albert Dippel, who had the farm rebuilt in 1710.

Johann Heinrich Jung-Stilling , who grew up a good ten years later in Hilchenbach near Berleburg, set him the following monument, which Dippel should aptly characterize: “Dippel was a big head, but at the same time inflexible, proud, striving and a biting blasphemer; he feared nothing in the whole wide world; it seems that he would have liked to become a clergyman, and it seems to me as if in this position he would have turned the bottom line on top [...] So he combined mystical morality with the doctrine of our newest theology, and with it as well all kinds of crickets. That was indeed a strange mish-mash! "

In 1697, under the influence of the writings of Jakob Böhme , supported by Gottfried Arnold, he turned to pietism, admittedly strongly influenced by his own individualism and radicalism. He increased the Pietistic idea of rebirth to the point of self-redemption through substantial transformation as a result of rebirth. The dogmatic statement of the vicarious suffering of Christ (especially in the form of the doctrine of satisfaction ) by Anselm of Canterbury was just as much a target of his sharp attacks as church-friendly pietism. It almost goes without saying that his controversial and at times foul polemical manner was also aimed at combating orthodoxy and philosophical determinism . The focus of his thinking was the freedom of the individual. That is why he rejected the determinism of Hobbes and Spinoza . His radicalism prevented his appointment to the 3rd theological professorship in Giessen, for which he had been proposed.

He is the first author to introduce the term "enlightened" into literature:

“The enlightened and enlightened minds sought to drive away the right of nature through the Bible / and if they had succeeded in this pseudo-sacred plot / they would endeavor / to drive out the Bible / through their enlightenment / with it / if such means were twisted out of the hands of people / could presume a dominate the more surely over them. "

He regarded alchemy as a serious science that could not be practiced “in secret” and it was how he made a living. Animal oils obtained by distilling bones and / or meat were known before him. The essential oil named after him ( Dippels Tieröl ) became known through his claim made in his dissertation in Leiden (De vitae animalis morbo et medicina) that it was an elixir vitae , a universal medicine . It was used as a remedy for worms and for the treatment of epilepsy and was found in pharmacies until the 19th century. But even Diderot asked in the Encyclopédie for published evidence of its effectiveness. According to Georg Ernst Stahl in Berlin (around 1706), Dippel was involved in the discovery or first production of the Berlin blue pigment by Johann Jacob Diesbach . Diesbach discovered it by chance while using a waste product from Dippel's laboratory - contaminated potash, which Dippel had used to clean his animal oil. At times, Dippel also produced Berlin blue himself, the first synthetic pigment and at that time very popular as a blue paint after he had fled to Holland.

Dippel as a model for Frankenstein

Dippel's connection to Frankenstein Castle led to the theory that he was the model for Mary Shelley's novel Frankenstein . The hypothesis was first proposed by Radu Florescu in his book In Search of Frankenstein (1977), in which he speculated that Mary Shelley visited the castle during her travels on the Rhine with Percy Shelley and may have learned local legends about Dippel.

Local historian Walter Scheele added that the legends in the villages around the castle were also passed on from Jacob Grimm to Mary Jane Clairmont, translator of Grimm's fairy tales and stepmother of Mary Shelley. Scheele also claims that in 1814 Mary, her half-sister Claire Clairmont and Percy Bysshe Shelley visited Frankenstein Castle. Other historians whose research areas are Grimm, Shelley, or Burg Frankenstein see no evidence for these assumptions. Scheele's alleged letter from Grimm to Shelley has not been found.

Various non-fiction books about the life of Mary Shelley name Dippel as a possible starting point. The literary scholar Miranda Seymour points out that Mary Shelley speaks of “gods [making entirely] new men” in her diary shortly after her travels through the region around Burg Frankenstein. She thinks the connection is more than just coincidental. A few years later, in 1840, Shelley did not mention the Frankenstein with a single word in her travelogue of July 4th on the trip from Darmstadt to Heidelberg.

Regardless of historical facts, Dippel's status as a prototype of Frankenstein has found its way into popular culture - similar to Count Dracula's equally controversial interchangeability with the historical Vlad III. Drăculea . In addition to the speculative work of Florescu, the Dippel / Frankenstein merger is the subject of several fictional works: