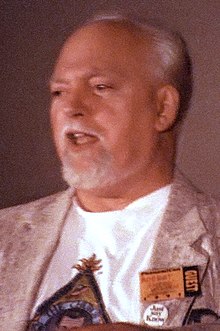 Robert Anton Wilson (actually Robert Edward Wilson ; born January 18, 1932 in Brooklyn , † January 11, 2007 in Capitola near Santa Cruz , California) was an American best-selling author, philosopher and anarchist . Among other things, he became famous for his Illuminatus trilogy! .

Robert Edward Wilson was born on January 18, 1932 in Brooklyn to John Joseph and Elizabeth Wilson. He developed polio in his childhood but was cured by Elizabeth Kenny's method, then unrecognized by the American Medical Association . As Wilson reported several times, this was the first incident for him that made him doubt authorities and also trust alternative, unrecognized healing methods. The illness is said to have been one of the reasons why he was later not drafted into the Korean War because he limped slightly.

Wilson's parents sent him to a Catholic elementary school. His school days there were characterized by extremely strict teaching methods and flogging. In 1946, he convinced his parents to send him to a public mathematics and science school. There he began to read all the authors whom the nuns at his previous school had warned him about: Charles Darwin , Thomas Paine , Robert G. Ingersoll , Henry L. Mencken, and Friedrich Nietzsche . As a youth he joined a Trotskyist group, which he left after a year when their dogmatism appeared to him no less absurd than that of the Church. He was no less disappointed with Ayn Rand's philosophy to which he had subsequently turned.

Wilson was studying electrical engineering at the Brooklyn Polytechnic Institute in the 1950s and wrote his first stories, which were never published. He later changed his major and studied mathematics. He spent a lot of time in jazz bars, had a relationship with an African American woman, and started smoking cannabis . In order to cope with the conflicts that arose from his Catholic upbringing, he underwent psychoanalytic treatment several times ; a therapist from Wilhelm Reich's school healed his chronic headache.

In 1956, Wilson gave his first public lecture on science , pseudoscience, and science fiction at the New York Academy of Sciences . Allegedly, his future wife Arlen Riley was also in the audience. However, he did not meet her until two years later and married her shortly afterwards. Other influences that worked on Wilson in the 1950s were Richard Buckminster Fuller and Zen Buddhism , with which his friend Alan Watts introduced him.

In the early 1960s he began experimenting with psychedelic drugs . First he tried peyote . At the time, he was living with his family in an old slave hut in the woods outside Yellow Springs , Ohio . Wilson earned his living with various positions as an editor until he was finally editor-in-chief at Playboy in 1965 . These letters, especially the very different conspiracy theories they contain , provided him and his colleague Robert Shea with a lot of inspiration for the Illuminatus! Trilogy they wrote together. For his writings, Robert Wilson adopted that of his maternal grandfather, Anton, as the middle name, as he initially wanted to save his real name Robert Edward Wilson for future literary masterpieces. However, Robert Anton Wilson ( RAW for short ) soon became his hallmark on the literary scene.

In 1964, while at work, he met Timothy Leary , with whom he befriended and with whom he published Neuropolitics in 1978 . This work gave him a breakthrough. In the mid-1960s he met William S. Burroughs , who made him aware of the strange synchronicities with the number 23 , which are also used in various books by Wilson. While at Playboy , he got in touch with Kerry Thornley , one of the founders of Discordianism . He wrote several articles for his magazine, New Libertarian. In 1968, Wilson and Robert Shea were shot at with tear gas at protest rallies on the sidelines of the Democratic National Convention . At that time you were there, Illuminatus! to revise. The experiences of the party congress were built into the book.

In 1971, Wilson quit his Playboy job to get more serious about writing. When his savings ran out after a year, the family had to live on welfare for two years. It wasn't until 1974 that Wilson earned enough money for a living from writing. Illuminatus! was released in 1975. However, the publisher refused to publish the work in full. This led to a fight between Wilson and the publisher. Finally the publisher prevailed and only an abridged version appeared.

On October 3, 1976, Patricia Luna, the daughter of the Wilsons, was killed in a robbery.

From 1982 to 1988 the Wilsons lived in Ireland . They turned their backs on the United States to protest against Ronald Reagan's presidency, but also to study their Irish roots in their new homeland. When the Wilsons later returned to California in 1988 , Wilson discovered his love for film. His works from this period often deal with the films of Stanley Kubrick and Orson Welles .

In the mid-1990s, Wilson and Arlen moved to Capitola , near Santa Cruz , California. Arlen died there on May 22, 1999. In the following years Wilson suffered from post-polio syndrome . The illness tied him to a wheelchair. After a while, however, the symptoms were relieved to the extent that he was finally able to walk again. Wilson attributed this to his use of cannabis. That is why he campaigned for the decriminalization of cannabis use. He continued lecturing and continued to publish books.

In October 2006, prominent US bloggers and fans launched a fundraising appeal for Wilson, who was impoverished because of the high medical costs and should have sold his house. The action raised $ 68,000. Wilson died on January 11, 2007 after a long illness from the effects of the recurrent post-polio syndrome. His ashes, like his wife's before, were scattered off the Santa Cruz Beach Boardwalk.

In terms of content, Wilson cultivated a wide range of topics from quantum mechanics , drug subculture and the world of secret societies . His recurring theme is the relativity of truth and the borderline between states of intoxication and mystical experiences. This also brought with it an interest in such phenomena that cannot be classified into the existing knowledge system. He often emphasized, referring to Alfred Korzybski , that our ideas of the world are only an approximation of them. He therefore always campaigned for a form of fundamental agnosticism , which he called "model agnosticism ": "My goal is to try to get people into a state of generalized agnosticism, not agnosticism about God alone, but agnosticism about everything." Support other people in their “self-programming” towards greater awareness and freedom. One of his means was to shake familiar worldviews. Much in his books serves to make the reader feel insecure. He tried to instill in his readers a basic distrust of all supposed authorities, including his own ideas.

As early as the 1980s, Wilson developed ideas for an unconditional basic income , which is now more and more widely discussed , proposing "large investments in adult education" as the final stage. He also saw the Internet as one of the most important tools for advancing human intelligence. Anyone exposed to such a multitude of contradicting signals must sooner or later begin to think for themselves, he concluded with a wink.

Wilson represented Leary's “8-circuit model” and wrote a dissertation on this at an alternative university, which he later published in a revised version under the title Prometheus Rising .

Wilson also dealt with political conspiracies and conspiracy theories , invented some - satirical - conspiracies and promoted the pseudo-religions Discordianism and Church of the SubGenius as well as Operation Mindfuck . He saw with great pleasure that these things quickly developed a strong life of their own , especially in internet culture . To describe communication problems in hierarchies, he used the concept of the Snafu principle. The Nihilistic Anarchist Horde (NAH) comes from the books of Robert Anton Wilson. The NAH distributed, among other things, handicraft sheets for building atomic bombs and drew attention to itself with slogans such as “honk when you are armed!”.

Another target of his ridicule was the Committee for the Scientific Investigation of Claims of the Paranormal (CSICOP), which Wilson considered to be "one of the most dogmatic, fanatical and crusader atheistic religions of the time." Wilson's response to the skepticism movement was the Committee for Surrealist Investigation of Claims of the Normal (CSICON), which is offering one million Irish pounds to anyone with anything "normal," "average," or "ordinary" to show. Timothy FX Finnegan, the alleged founder of CSICON, is also the inventor of "patapsychology", Wilson's homage to Alfred Jarrys ' pataphysics .

In addition to Friedrich Nietzsche , Wilson's literary heroes include Aleister Crowley and Charles Fort . Stylistically, he cultivated the legacy of James Joyce and William S. Burroughs . Together with Robert Shea he was named Illuminatus for the novel trilogy! Induced into the Prometheus Hall of Fame in 1986 .

Robert Anton Wilson has published both fictional and factual texts. However, since he often combined both types with one another, a separate list is not possible here.